Gather round people, let me tell you a story. It’s a story of how netball used to be played. Of goal attacks and goal shooters who could – and did – shoot from anywhere. Of a country who stopped doing what it was so good at to its great detriment. And of a much maligned rule change that may be part of a solution to a very big problem.

But I am getting ahead of myself. Let me start at the start.

Once upon a time in a land not far far away (let’s call it ... ummm … I dunno … Australia) there lived women who played a sport that had the sole aim of shooting a ball through a net. No backboards, no dribbling (except during post-match celebrations) and no running with the ball. Rather imaginatively it was called netball. 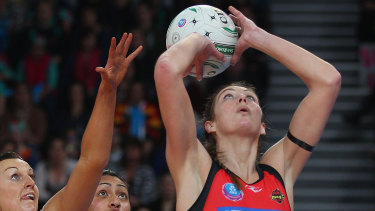 The arrival of Irene van Dyk from New Zealand signalled the start of a new age in Trans-Tasman netball.Credit:Getty Images

It came to pass that the best of these women represented their country in a team that would one day in the future be known far and wide as the Diamonds. They would eventually be known across the lands as some of the most-feared and formidable warriors ever to grace a playing surface.

For many years the biggest weapon in this team’s arsenal was something known as the “long bomb”. The best were players such as Marg Caldow in the 1960s and '70s, Anne Sargeant in the '80s, Vicki Wilson in the '90s and Cath Cox in the 2000s (which in its own right is particularly apt for reasons unrelated to her ability to shoot the ball. But I digress).

One day a tall stranger a came across the seas, and her arrival signalled a new age. Irene van Dyk stood at 193 centimetres and possessed many skills. She was strong, she could move, she had great hands. Ominously, she could shoot.

Soon everyone wanted a tall goal shooter. The Queensland Firebirds recruited one of the best from Jamaica to play for them in the Trans-Tasman League. Romelda Aiken, standing at 196cm spearheaded the Firebirds to five grand final appearances in six years.

All that tall timber came at a cost, making a dark forest for netball to get lost in.

Slowly but surely the game changed. Shots were routinely taken from under the post. Shooting percentages climbed. Excitement levels? Not so much.

For the long-bomb specialist is a sight to behold in all of her glory. Heels flapping over the circle edge, lining up her distant target, steely determination in her eye as she sends the ball soaring, arcing, as if by some ancient magic inexorably towards its destination. Those moments that the ball is in the air is where the anticipation builds, the heart beats faster until the moment of ecstasy, where the goal is scored.

The long-bomb specialist was magnificent. And for many years, she was gone. Or was she?

For behold in an age of fire and pandemic, there was born a rule. A rule whose birth was not met with celebration but with indignation. A rule that would change the way the game is played. The super shot.

Born into a world that didn’t want it, it may very well be the rule that we needed. For you see, this rule may take netball back to the way it used to be. Its opponents have cried that “this is not netball!”

But do you know what? It is.

And hear ye this. The best part of this story is not that the long-bomb specialist has a chance to return. It is that she was always here, trapped in a game plan that demanded the ball end up under the post. With the super shot, she now has a chance to shine.

Liz Ellis is a netball commentator and the most-capped Australian netball player in history.

Benzema played his 350th game for Real Madrid in La Liga
Atletico are in talks with Arsenal to buy out Torreira
Kulusevski scored with the sixth touch and the first shot for Juve-this is crucial in the debut victory of coach Pirlo
Real Madrid was the first in La Liga to release 4 players born in the 2000s
Messi says goodbye to Vidal: I always thought you were a phenomenon. Our paths will cross again
Zidane about 0:0 with Sociedad: Real Madrid lost two points. Overall, we played well
Real Madrid have lost points in 1 La Liga game in 5 of the last 8 seasons as Champions
Source https://www.theage.com.au/sport/long-bombs-and-super-shots-time-to-get-back-to-the-future-20200806-p55j6w.html?ref=rss&utm_medium=rss&utm_source=rss_feed

'Never been here before': Harvey Norman profits up 185 per cent as retailer captures more COVID spending

TikTok affair exposes ugly intersection between US politics and capitalism

'Room for everyone' as NSW records four new COVID-19 cases

Not leaving on a jet plane: Oil rebound hinges on return of international flights

'Drug kingpins' to be extradited to Australia, court in Dubai orders

Traffic back to normal following crashes in Sydney's west

The man who put Pepsi on the map dies at 99

Camps to reopen for regional schools, but Melbourne not out of woods

Sydney's heat to give way to possible thunderstorms and damaging winds

Where prices really double every 10 years

As it happened: Commens, Perkins lay down marker after breaking droughts