Businesses battered by the coronavirus pandemic could be thrown a financial lifeline in next Tuesday’s federal budget through a temporary tax break to enable them to stay afloat until they turn a profit.

The Sydney Morning Herald and The Age can reveal the Morrison government is considering mimicking a policy introduced across the world that enables businesses of all sizes to claim back some of the tax paid pre-COVID to offset losses incurred during the current recession. 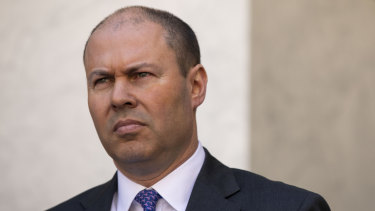 Treasurer Josh Frydenberg has pledged to help businesses get through the COVID-19 recession.Credit:Dominic Lorrimer

As the federal government puts the finishing touches to the budget, which is expected to show a deficit of at least $200 billion, it has been looking at reintroducing the loss carry-back provision as a way to protect hundreds of thousands of Australians employed by businesses which will register a loss this financial year.

The world's leading economies have been encouraged by the OECD to put in place temporary loss carry-back provisions in a bid to reduce the damage wrought upon usually profitable companies.

A string of rich nations have introduced or expanded their loss carry-back provisions this year because of the losses inflicted on usually profitable companies by the pandemic. They include the United States, Britain, Germany, Austria, Japan and New Zealand.

Prime Minister Scott Morrison told the National Press Club on Thursday his government was delivering lower taxes for businesses and individuals, pledging there was "still more to be done" and "there will be more next week".

Under loss carry-back, a firm that has paid tax on profits in previous years can claim back a refund to offset a loss. It is seen as a way by tax experts to give vital cash flow to businesses that would have been profitable but for strict lockdown and restrictions to prevent the spread of COVID-19.

PwC tax partner Jonathon Malone said the advantage of loss carry-back rules was that they would support businesses that were profitable and contributing to the government’s coffers in the good times, absent a global pandemic.

"The temporary support from a loss carry-back measure has the potential to provide assistance to businesses and their employees at the right time for a 'soft landing' in the wake of the health response that has been undertaken to save lives," he said.

"If they were adopted loss carry-back rules would bring Australia into line with reforms in the US and temporarily adopted by New Zealand as a COVID-19 support mechanism." 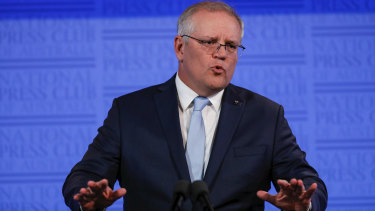 Prime Minister Scott Morrison wants to see businesses survive and invest out of the recession.Credit:Dominic Lorrimer

He said countries with similar tax systems to Australia had embraced the provision as a way to keep afloat firms that but for the coronavirus would be operating as normal.

"Introducing a loss carry-back provision is eminently sensible and would not take much to put in place because we've already done it," he said. "We've done this before, we should do it again."

The budget will also contain other measures aimed at helping the small business sector through the recession.

Expanded tax concessions, such as the ability to immediately deduct some start-up expenses, will be made available to firms with a turnover of between $10 million and $50 million.

Eligible firms will be exempt from fringe benefits tax on car parking and work-related portable electronic devices such as phones and laptop.

Other changes include enabling firms from the middle of next year to settle excise duty on eligible goods, will also be put in place.

The package, expected to help 20,000 small businesses, will cost $105 million over the next three years.

Employer provided retraining for staff redeployed to a different role in the business will also be exempt from FBT from October 1 as part of a separate measure that is forecast to cost $7 million.

"Small business is the backbone of our economy. The Morrison government will continue to support our small and medium sized businesses as part of our economic recovery plan," Treasurer Josh Frydenberg said.

The Henry tax review of 2010 recommended a loss carry-back provision, as did a business tax working group put in place by then Labor treasurer Wayne Swan.

It was made law in mid-2013 with a maximum offset of $300,000 available for loss-making companies. It was estimated to cost the budget about $300 million annually.

But in 2014 the carry-back was axed by the Abbott government, which was opposed to policies paid for by revenue from the also abandoned minerals resource rent tax.

Data from the Australian Bureau of Statistics on Thursday revealed a bounce back in the number of job vacancies across the country.

Despite the increase, there are still 21,000 fewer job vacancies now than before the coronavirus pandemic started while the number of people unemployed stands at 1 million.

Asia-Pacific economist for job site Indeed, Callam Pickering, said there were now 4.5 unemployed person for every job vacancy in the country, almost 50 per cent higher than before the advent of the pandemic.

Shane is a senior economics correspondent for The Age and The Sydney Morning Herald.

Lucescu on the Juventus defeat: Maybe 0:2 is a lot for such a match. We played very well
Pique may miss the match with Juventus due to removal in the game with Ferencvaros
Gnabry contracted the coronavirus. Bayern play Atletico tomorrow
Fati is the first in the history of the Champions League to score 2 goals under the age of 18
Messi scored in the 16th consecutive Champions League season and repeated Giggs' record
Bruno did not score a PSG penalty at the first attempt, but the referee asked for an Interruption due to Navas' exit from the goal line
Koeman is the fifth coach to manage 6 teams in the Champions League
Source https://www.smh.com.au/politics/federal/loss-carry-back-the-scheme-to-help-businesses-on-the-brink-20201001-p5616c.html?ref=rss&utm_medium=rss&utm_source=rss_feed