Maddocks has the smarts to go with speed

Will Genia knows X-factor when he sees it and, to him, it's written all over Wallabies rookie Jack Maddocks.

Maddocks is a bolter from the blue for Australia's first Test of the year against Ireland on Saturday night, particularly considering he was more focused on cricket than rugby just over two years ago. 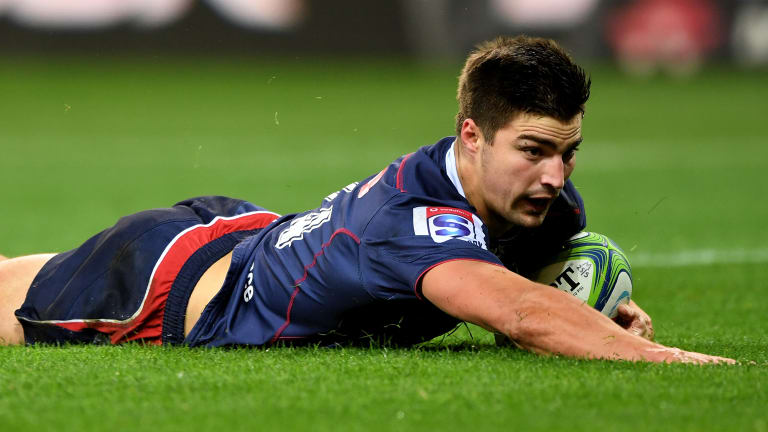 The 21-year-old speedster has been a revelation at fullback for the Melbourne Rebels this season, crossing for eight tries - the fourth most in the competition.

Watching on closely, marvelling at the talent and potential of the Sydney product, Rebels teammate Genia says Maddocks has truly blossomed since getting a shock call-up for last year's spring tour.

The youngster received Michael Cheika's nod on the back of a star turn in propelling Australia's under 20s to a rare win over New Zealand a year before.

Genia, the 88-Test halfback, saw a young kid pinching himself about being on a European tour but now he's an assured performer.

"He's more confident in himself as a person which allows him to express himself off the field, and likewise on the field," he said.

"He's not afraid to back himself, to run and to kick and do whatever he likes.

"He's got incredible talent. He's incredibly quick, he's good under the high ball, he's a big guy, he's strong in contact and he's just got X-factor all over him."

Maddocks' Rebels form has him well and truly in the mix for a Test debut at Suncorp Stadium, especially as his pace on the wing gives him versatility for an Australian bench spot.

But with Australia's playmaking cupboard bare behind Bernard Foley and Kurtley Beale, he's been viewed as a Test five-eighth of the future.

Genia says the chance for the youngster to grow more rubbing shoulders with the likes of Foley, Beale, Israel Folau and David Pocock during the three-Test series against Ireland will be invaluable.

"He seems like a bit of an airhead - like he's a space cadet - but he's actually got a good footy brain," the vice-captain said.

"He knows where to be, and when to be there, and he's very hungry to learn."

Aitor Karanka: If there is a team that can win back against Manchester City, it is real
Juventus and Atletico have started talks about the transfer of Lacazette. Inter are also Interested in him
Rangnik agreed to take charge of Milan from the 2020/21 season. He can also take the post of sports Director
Ocampos did everything for the victory of Sevilla: first he scored, and then he put on a goalie's Jersey and in the 101st minute dragged the kick of the goalkeeper Eibar
Pizarro finished his career as a player. Werder's players cradled him in their arms after the match
Aitor Karanka: When Real Madrid wins, they always talk about the referees
Gendusa two weeks training with Arsenal according to the decision of Arteta. Londoners can sell it
Source https://www.canberratimes.com.au/sport/rugby-union/maddocks-has-the-smarts-to-go-with-speed-20180605-p4zjh2.html?utm_medium=rss&utm_source=rss_feed

How coronavirus cases are surging in the suburbs

'We are not angry': Praise for FFA despite flight hiccup

When it comes to home theatre systems, sometimes wired is wiser

Another state bans Victorians from entry

SA calls in the army to keep Victorians out

FAQ about Hamilton and the historical record

How to home-school your children in social skills

RBA holds rates as consumers spend on groceries but not services

'It started to wrap around me': Driver fought off snake at 100km/h

Papers, please: the story behind the 'Checkpoint Barkly' sign

Swans at a loss with no mid-year draft, no loans and no end in sight to injury crisis

Where new virus cases have come from

Afterpay owners selling $250 million of shares to shore up capital

'You are heroes': Readers rally around Melbourne's tower residents

Peace deal between Australia Post and union to protect posties

A tale of two circuses: an existential balancing act

Trump calls on Bubba Wallace to apologise over noose ‘hoax’

It’s game, set and match at this amazing home

Department apologises for delays in getting food to tower residents

Tipping point: Wirecard's collapse could lead to big changes for the accounting profession

Will Wirecard's collapse lead to big changes for the accounting profession?

Future of Abbotsford Centrelink uncertain as union calls for answers

Family watched in horror as helicopter crashed onto Broome street

A fading routine: The world's cash-free future is getting closer

Ipswich council puts your money where your mouse is

From the Archives, 1963: Long reign for Margaret Court, Wimbledon champion

'That is intolerable': V'landys fumes as second Fonua-Blake spray at ref is revealed

Commonwealth must acknowledge racist past: Harry and Meghan