An owner of a former La Liga club could hold the key to keeping the Mariners on the Central Coast after he submitted an offer to buy the A-League side and its associated real estate in Tuggerah.

After Tuesday's announcement of his intention to sell the club or hand back his A-League licence, Central Coast Mariners chairman Mike Charlesworth confirmed he is negotiating a sale with Australian businessman Abdul Helou, who owns a third of Spanish club Rayo Vallecano. 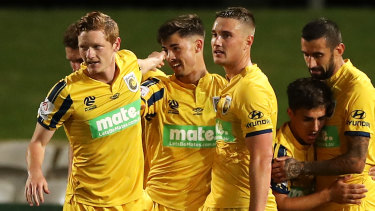 The Mariners are set to have new owners, and possibly a new home.Credit:Getty

An agreement is yet to be reached, however talks are advancing to transfer the licence to a consortium lead by Helou, which is also interested in purchasing land owned by Charlesworth and previously associated with the Mariners.

"I am aware of Abdul Helou, who has shown interest, but he is one of many over the past few months who have shown some interest," Charlesworth said. "We will go through a process over the next few weeks to talk to potential investors and buyers. We will shortlist those and find the right investors. We want people who can really help drive the A-League."

Charlesworth would not rule out selling the licence even if it means the club relocating from the Central Coast.

The Helou bid group intends to keep the club in Gosford with discussions centred around a purchase of the Mariners' A-League licence and the club's centre of excellence and commercial real estate. The consortium's vision is to rebuild the Mariners as Australia's best developer of young talent and to sell players to foreign clubs, with the centre of excellence central to that proposal.

The property in Tuggerah is not owned by the Mariners, but registered to a separate business that is owned by Charlesworth, who has not ruled out selling the club and the commercial property.

"Both are for sale, but they are owned by separate entities so they are not intrinsically linked," he said. "The first team doesn’t train at Tuggerah and hasn’t trained there for a few years; they have trained at Pluim Park. Some people might want it, some might not want it. Everything is for sale at the end of the day."

Should the takeover be successful, there is the potential for the Mariners to form a partnership with Rayo Vallecano, who finished last in Spain's top flight in 2019 and were relegated. The Madrid-based club is a regular in La Liga, but narrowly missed out on the chance for promotion last season, finishing one point adrift of the play-offs.

Koeman Pro 3:0 with Celta: Proud of the team. The results show that we are on the right track
Milan extended their unbeaten streak to 18 games by beating Rio Ave on penalties in the Europa League qualifier
Arteta on Manchester City in the League Cup: Arsenal are not very lucky with the draw. This is another test
Klopp about losing to Arsenal and Liverpool in the country of dreams, you have to score. Last pass failed
Muller held the UEFA ceremony in the stable. There had Neuer, Kimmich and Evangeliski
Liverpool 4 seasons in a row, cannot get past the 5th round of the League Cup and 2012 wins the tournament
Leno - first Arsenal goalkeeper in 8 years not to miss at Anfield
Source https://www.theage.com.au/sport/soccer/mariners-boss-in-talks-to-sell-club-to-owner-of-rayo-vallecano-20200806-p55j6o.html?ref=rss&utm_medium=rss&utm_source=rss_feed