Public hospital patients in Melbourne and Mitchell Shire will be tested for COVID-19 a week before their scheduled elective surgery.

In a scheme announced on Monday by Health Minister Jenny Mikakos, patients will be screened before they arrive at hospital, and if they are symptomatic they will be told to self-isolate until their surgery. 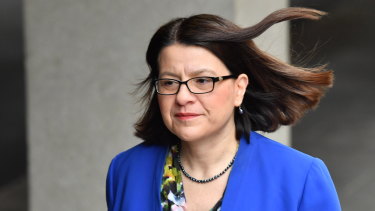 Unless the surgery is deemed urgent, any patients who test positive will have their surgery postponed.

Ms Mikakos said testing patients before their surgery was "the best way" to protect patients and healthcare workers from the virus.

The announcement comes after outbreaks among staff in at at least a dozen hospitals in recent weeks, including The Alfred, the Northern Hospital, the Royal Melbourne, the Royal Women's, Brunswick Private, Box Hill Hospital and St Vincent's.

Tony Bartone, president of the Australian Medical Association, welcomed the initiative, but warned that the new testing program should not lead to complacency over personal protective equipment and safety protocols in hospitals.

“We still need to take all the appropriate precautions to protect our healthcare staff as best as possible, regardless of whether a test says yay or nay,” he said.

Dr Bartone said the single-test plan was not foolproof in stopping coronavirus being introduced to hospitals.

“There is a lag period between the test and the result,” he said. "You could test negative but depending on where in the incubation cycle the virus is, you could still develop it a few days later."

He said testing people before elective surgeries had been considered earlier in the pandemic, but at the time it was not considered a priority.

"With the low level of community transmission at the time, it is not the best use of scarce resources," he said.

"What we really need to be doing is really seeking and reaching out to all the possible cases in the available areas where we know we've got increased transmission," he said.

"They need to be religiously tested and followed up."

Ms Mikakos said those requiring emergency surgery would not need to be tested or wait for a result.

A Sunshine Hospital nurse was infected with COVID-19 after treating a coronavirus-positive Cedar Meats worker who needed emergency care on a severed thumb.

The testing plan comes as the state reduces its elective surgery capacity to 75 per cent in case hospitals become flooded with coronavirus patients.

The state government had originally planned to allow all Victorian hospitals to return to 100 per cent of their usual elective surgery operating theatre capacity in July, but reversed the stance last week.

Ms Mikakos has encouraged people with health problems to keep seeking treatment during the crisis, despite the decision on elective surgeries.

“It's important people continue to look after their health during the pandemic – no one should put off seeking medical care if they need it. Our hospitals are safe and open to everyone," she said.

Patient advocates have called on governments to unveil a plan to catch up on surgery waiting lists.

Xavi: Messi needs Barcelona and Barca needs Leo. If he is happy, the club will win more trophies
Ex-referee Andujar Oliver on Saul's fall: there Was a light touch of the goalkeeper, but it was not a penalty
Alfonso Davies: As a child, I adored Messi, and now I will defend against him
Mesut Ozil: you get Disappointed when you know how good you are, but they don't let you out
Rummenigge on the match with Barca: Davies will take care of Messi. Alfonso has not been beaten this season
Flick about the Champions League match: This is not Bayern against Messi, but a game against Barcelona
Xavi: Setien's Barca Game is very similar to Cruyff's style
Source https://www.smh.com.au/national/victoria/melbourne-s-elective-surgery-patients-to-be-tested-for-covid-19-20200713-p55bov.html?ref=rss&utm_medium=rss&utm_source=rss_feed

Wall Street fades as record stays out of touch

When I started to go grey a few years ago, I made a personal decision

Fun to be had if you find the right wave

APPLY NOW: 25+ Coast jobs listed in the past three days

’Without warning’: Man walks free after punch outside bar

SEQ water alert: Restrictions could be back by February