As far as breakout years go, Millie Boyle's 2019 was one for the ages.

The cross-code star claimed an Origin win, an NRLW premiership, made her Test debut for the Jillaroos, was named the Super W rugby competition's player of the year and picked up second place at the World Cup 9s. In one year.

Then, she felt a twinge in her neck.

Ahead of Sunday's NRLW grand final, Boyle opened up about her struggles with a potentially career-ending neck injury – and the phone call from NRL great Anthony Minichiello that made her cancel her surgery just two days before she was to go under the knife.

Boyle started feeling the pain in her neck around the middle of last year.

"I never really addressed it properly ... because I didn't want it to be worse than it was," she said. 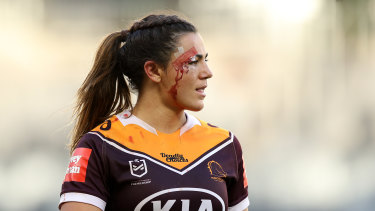 It was only until after the NRLW grand final that Boyle knew something was seriously wrong.

"I woke up a couple of days after that and I could not move my neck," she said.

Still, Boyle continued to ignore the pain, going on to play at the World Cup 9s and in a Test clash for the Jillaroos in October.

"Looking back, it's pretty stupid, because it's a pretty serious injury," she said.

It wasn't until Boyle left numbness in her ears and had pins and needles running up her arms that she sought medical advice at the start of 2020.

Sure enough, Boyle's scans showed she had a bulging disc in her neck. She was booked in to have surgery in mid-March, with a titanium disc to be inserted in her neck.

"They have to cut through the front of your neck," she said. "I was probably more worried about the big scar that was going to be on my neck ... I don't think the surgery part had hit me."

Boyle was told the surgery would mean a minimum nine months out of elite union and league. Even then, there was no guarantee she would ever be 100 per cent again. 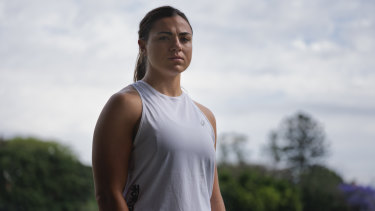 As a last hurrah, Boyle went to a footy camp in March where she met New Zealand NRL physio Nigel Beach. He advised her not to have the surgery and instead to reset her training schedule in an effort to heal the injury.

Torn on what to do, Boyle's player agent recommended she chat with Minichiello.

"He's had pretty crazy injuries over his time," she said. "He's had surgery, but also has learnt how you can heal without it."

The pair of Blues stars chatted about Boyle's injury, with Minichiello encouraging her to cancel her surgery.

"It was pretty surreal chatting to him about that," she said. "He asked me what I was doing at the moment and how different things affected me.

"He told me the way he changed up his training, saying he did a lot of things differently to when he was in a footy team, doing a lot of yoga and pilates and stretching.

"He was just able to take his training to the next level, not going with the norm."

Minichiello had a disc injury in his back through 2006 and battled with back and neck injuries throughout 2007 and 2008.

"He was definitely on the page of avoiding surgery," Boyle said. "It's ridiculous how many times he's had this injury. He didn't know any better the first time he did have surgery and he went on and kept playing, but it was a lengthy process."

The daughter of former Raiders player David Boyle spent three months living in NSW with a rigorous training resume. To her surprise, the total reset of her training and diet made the world of difference.

At the beginning of the three months, Boyle was struggling to even drive due to the pain parking caused due to the extension of her arm across her body. By July, Boyle was told she was fine to play Origin and NRLW this season.

"To see the results at the end were crazy," she said. "It was just little things at the gym, like changing your grip up on certain exercises, not doing too much overhead, more neutral grip instead of a bench press and really engaging the back muscles instead being front dominant.

"My training [beforehand] was not very consistent, I wasn't on the right programs at the right time due to the changing of the sports."

Ironically, Minichiello's advice to Boyle will likely work against the Roosters legend, with the Broncos going up against the eastern suburbs club on Sunday in the NRLW premiership decider. Boyle has been named in the No.8 jersey, with the Broncos' favourites to go three from three.

"It's been such a whirlwind of emotions," she said. "I agreed to the surgery because I thought that was the only answer. It just happened to be that wasn't for me."

Antonio Conte: I Don't think Real Madrid can cry about their losses. It's funny that the media write about their problems with the squad
Lewandowski on the cancellation Of the Golden ball: it's not that important. Such prizes are something extra
Salah can play with Atalanta. He became ill with the coronavirus
Klopp on injured: no News. I have no idea who will play for Atalanta. Why should we give them information?
Barcelona are thinking about signing Garay due to Pique's injury
Pepe apologized for the red in the match with Leeds: there is no excuse for My behavior. I am deeply sorry
Manchester City have prepared a 10-year plan for Messi. After finishing his career, they want to make him an Ambassador for the club (The Times)
Source https://www.smh.com.au/sport/nrl/millie-boyle-was-about-to-have-life-changing-surgery-then-she-got-a-call-from-anthony-minichiello-20201023-p5682l.html?ref=rss&utm_medium=rss&utm_source=rss_feed

Government to spend $49b, rack up huge debt to turn Victoria around