Wallabies fans could be forced to endure a five-Test Bledisloe Cup series if the Rugby Championship does not go ahead in New Zealand later this year.

Under a trans-Tasman contingency being cooked up should the New Zealand Government not green-light plans for the four-nation Rugby Championship to take place in a hub on Kiwi soil, New Zealand and Australia would do battle in five consecutive Test matches in October and November. 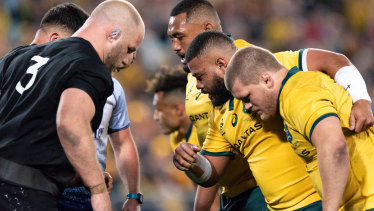 Sydney could play host to a Bledisloe Cup clash in 2020.Credit:Getty

It would kick off Dave Rennie's Australian tenure in the most trying of circumstances and test the endurance of Australian fans, not to mention make winning back the Bledisloe Cup a herculean task.

But the plan is in the works given the ever-changing COVID-19 situations in Australia, South Africa and Argentina, in particular.

SANZAAR's Thursday announcement that the Kiwis would host the entire tournament is still dependent on the New Zealand government granting approval, which was still up in the air.

The tournament could also be affected by ongoing haggling over World Rugby's Test window for this year, which dictates when and for how long national unions can call back their Test players with no penalty.

It is three weeks in July and November under normal circumstances, but a World Rugby Executive Committee meeting next week will discuss doubling it to allow unions to re-coup lost revenue from the cancelled July tours.

With all that up in the air, Australia could host as many as three of the five Bledisloe Cup Tests, with Sydney's ANZ Stadium and Perth's Optus Stadium in the mix to pick up unscheduled matches.

If the Rugby Championship goes ahead the countries will still play four Tests, with the first two to be held on Australian soil on the provisional dates of October 10 and 17. Brisbane has been locked in for close to two years for the second Test, with Melbourne's Marvel Stadium hosting the first.

But the Herald can reveal that Sydney stands to benefit if Melbourne's spiralling COVID-19 second wave is not brought under control in time, with ANZ Stadium lined up as an alternative venue. Optus Stadium is also in the mix.

The Wallabies would then travel to New Zealand for the third and fourth Tests as part of the rest of the Rugby Championship, with a two-week quarantine period almost certain to be on the cards for them and the Springboks and Pumas.

If the Rugby Championship does not go ahead, the Wallabies will either stay for a fifth Test or return home with the All Blacks - potentially observing another quarantine period - to play the fifth.

It is not yet clear if all five Tests would count towards the Bledisloe series. It is likely they would, given the understanding is the Wallabies will need to win three matches in a four-Test format to claim the trophy for the first time since 2002. Australia has only once won three Tests in a row against the All Blacks, in 1998.

Rennie, meanwhile, is set to arrive in Australia next week on July 21, and will have to serve a second quarantine period. He and wife Steph went into isolation in Auckland after their return from Scotland, then decamped to New Plymouth to catch up with family before they moved to Australia.

"We have determined that New Zealand is currently the favoured option given the COVID stability within the region," Marinos said.

"Critical to this, however, is alignment with the New Zealand Government around its requirements for this to take place.

"SANZAAR is well advanced in option planning with New Zealand Rugby, which in turn, is now seeking New Zealand Government approval. It is hoped that details on the TRC will be announced in the near future."

Frankie de Jong: Barca have a lot of problems, the match with Bayern showed that. A lot of things need to change
Philippe Coutinho: it was unusual to Play against Barca, but I have a contract with Bayern
Bartomeu does not intend to retire after 2:8 from Bayern
Bayern punished Barcelona for an 8-man defense. In this match, Messi was the problem, not the solution
L'equipe put Setien one for 2:8 with Bayern. For the first time, such an assessment was received by a coach
Pozornik! Barca fans met the team at the hotel after 2:8 from Bayern
Bayer's CEO confirmed that Havertz wants to leave the club
Source https://www.smh.com.au/sport/rugby-union/sydney-to-host-bledisloe-as-rugby-championship-confirmed-in-nz-20200716-p55clx.html?ref=rss&utm_medium=rss&utm_source=rss_feed