When I was growing up, my family was already COVID-19 prepared. My parents had no friends and we never went anywhere. All the food was frozen, kept in a massive freezer in the garage. You could lock our family down for months and none of us would have been the wiser.

Certainly, we never went on interstate holidays. Correction: we went once. To the Gold Coast. We drove up, my parents bickering all the way, while I sat in the back, consuming my own body weight in Enid Blyton.

Occasionally, my father had to pull over so I could chunder. I like to think this was my response to Enid's pedestrian prose style, but more likely it was the result of my father's erratic driving.

The holiday was horrible. As a bookish, asthmatic, only-child I could find no one to play with, and – after spending most of my life indoors – was left looking like a lobster after ten minutes in the Queensland sun. By day two I'd stick to any surface. If I sat for a moment on a vinyl banana lounge, I'd have to forgo a layer of skin just to stand up.

The only fun was when I slipped into town alone and – having saved my pocket money for weeks – visited a record store and purchased my first 45 single. It was Tom Jones' Green, Green Grass of Home. I took it home and showed my mother, who became unreasonably angry, declaring Tom Jones was inappropriately "sexy" for a child my age. 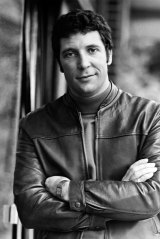 Tom Jones was inappropriately 'sexy' for a child of my age.Credit:Getty

I was forced to beat a humiliating retreat to the shop, confessing my mother's outrage and swapping the record for something more suitable. I chose Jake the Peg by Rolf Harris, so I guess the joke was on her.

Of course, I later learnt that other families had regular holidays. Frankly, I doubt I was missing anything.

Those with siblings fought all the way up the Pacific Highway, accusing each other of "being in my space", "stealing my air" or "looking at the view though my window." They would then kick each other in the footwell, a crime of violence which at least offered plausible deniability.

In our car there were no siblings and no stopping – save for the necessary two-minute pause for chundering.

At least that was better than other families, in which the father used the trip as an educational opportunity, making constant detours to the State's Third Largest Tree, The Mid North Coast Museum of Old Farm Machinery, or The Courthouse designed by a Colonial Architect Who Was Once Famous.

All this, and yet when they finally arrived it was to stay in a caravan park so decrepit and disease-ridden you could get tinea just by walking past the shower block.

Far better to be our family, early pioneers of the pre-emptive COVID-19 lockdown.

My father did not practice strict social distancing, but none-the-less had a limited repertoire when it came to physical affection. A pat on the back was pressed into service to express nearly every human emotion, including love, reassurance, dismay, pride, displeasure and revulsion. The trick – at age nine or 10 – was to decode which meaning was being conveyed at the time.

More extreme – and more in keeping with today's lockdown – was my mother's attitude to hygiene. She'd have loved the COVID-19 restrictions as it would have given her an excuse to wear a full-body hazmat suit at all times. As it was she had to make do with wearing white cotton gloves, which she would pull a little tighter whenever any other human being hove into view.

Later, when I had my own children, she would greet them when they came to her home on a visit, briefly patting each head with a hand encased in a white cotton glove. She'd then direct them to share a small vinyl footrest, which she'd placed in the centre of a large white bedsheet, spread out on the floor to protect her carpet.

She had to make do with wearing white cotton gloves which she would pull a little tighter whenever any other human being hove into view.

Richard Glover on his mother

The two children would sit on it warily, back to back, the older one generously choosing to stare at a blank wall so that his younger brother might be able to see the TV. They'd be shedding germs while they silently sat there, of course, but my mother was relatively relaxed – safe in the knowledge that, at the end of their visit, she'd be able to gather up the sheet, soak it in some sort of hospital-grade disinfectant, and thus removing any biological evidence of their visit.

At the time, this behaviour was bordering on the mean-spirited, and could certainly be labelled "un-grandmotherly", but under COVID-19 it suddenly looks like a sensible precaution.

I'm not complaining about any of this, as none of it was at all unusual in my primary school neighbourhood, deep within what I always think of as Sydney's Amish belt. It was the sort of district that was fiercely opposed to sex, as it just might lead to dancing.

All the same, at least we were COVID-ready – even if it was a half century before such strict precautions were required. Just think of us as ahead of our time.

And, even better, at least we missed out on those terrible family holidays.

Richard Glover is the author of 12 books, including the prize-winning memoir “Flesh Wounds”. He presents “Drive” on 702 ABC Sydney and the comedy program “Thank God It’s Friday” on ABC local radio. For more: www.richardglover.com.au

Sevilla goalkeeper bunu about the 11-meter shot: he Coached a penalty with Ocampos. He is hitting the same way as Jimenez
Coach Porto conceição can change Conte at the head of Inter
Hans-Dieter flick: I Think Tiago should play in the Premier League. He wants a new challenge
Coutinho can play against Barca. The contract does not specify a ban on his participation in the match
The real life thinking about to return to Zeballos. The decision is up to Zidane
Lopetegui before the semi-final with Manchester United: Let's believe that Sevilla can beat them
Felix about 120 million for a transfer to Atletico: If something doesn't go your way, I don't care
Source https://www.smh.com.au/lifestyle/life-and-relationships/my-family-were-early-pioneers-of-lockdown-life-20200707-p559sh.html?ref=rss&utm_medium=rss&utm_source=rss_lifestyle