A new renewable energy zone for the New England region aims to attract 8000 megawatts of generation capacity, nearly the size of the state's entire fleet of coal-fired power plants.

On Friday, the Berejiklian government will unveil plans for NSW's second renewable energy zone (REZ), including an investment target almost triple the 3000MW earmarked for its first zone in the Central West. 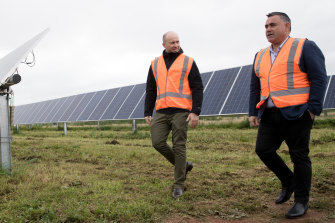 Energy Minister Matt Kean (left), with Deputy Premier John Barilaro at a solar farm near Dubbo in late June. Another big renewable energy zone will be launched on Friday, this time for the north-east of the state.Credit:Janie Barrett

Energy Minister Matt Kean said the "astounding" level of interest in the Central West precinct - with registrations of interest running nine times the earmarked capacity - meant it made "absolute sense" to go larger again in the north-east zone.

“The New England REZ will be able to power 3.5 million homes and, when coupled with Central-West Orana REZ, sets the state up to become the number one destination across Australia for renewable energy investment,” Mr Kean said, adding it also marked the biggest commitment to clean energy in NSW history.

The government will spend $79 million to assist with the acceleration of new grid connections needed to absorb the expected jump in new wind and solar farms for the region, or about twice the investment for Central-West Orana zone. The money will also help pay for community consultation efforts.

Deputy Premier John Barilaro highlighted the zone's benefits in terms of regional jobs and also lower power prices that would likely follow as capacity is added to the grid.

The new zone would "attract $12.7 billion in investment, support 2000 construction jobs and 1300 ongoing jobs – all while lowering energy prices and future-proofing the regions," Mr Barilaro said.

NSW now has about 10,000MW worth of coal-fired power stations, a figure that will drop to about 8240MW assuming AGL's Liddell plant closes as scheduled in 2023.

While intermittent electricity sources are typically available for fewer hours across the year than coal, gas or hydro plants, more solar and wind farms are likely to be built with storage options, making them readily dispatchable at night or when the wind isn't blowing.

Dylan McConnell, an energy analyst at the University of Melbourne, said the 8000MW if achieved would almost triple the current large-scale solar and wind capacity in the state of about 3300MW.

The New England zone alone could meet about 30 per cent of NSW's existing annual use based on the 2019-20 figures, or about double Liddell's output. Large-scale renewables met about 9 per cent of supply last financial year, rising to 13.5 per cent when rooftop solar is added in, Dr McConnell said.

With new solar farms costing as little as half that of new coal-fired power plants, the main challenge for developers has been to secure grid access. While NSW has a pipeline of some 116 large-scale renewable energy proposals for more than 18,000MW of capacity, fewer than one in 20 are able to connect to the network.

A $2 billion agreement signed by NSW and the Morrison governments earlier this year aimed in part to underwrite the increase of new transmission to support the rush of renewables.

Sally Hunter, a People for the Plains spokeswoman, said her group welcomed the backing for more renewable projects, contrasting it to the government's recent recommendation to support the $3 billion-plus coal seam gasfield proposed by Santos for the region.

"This goes to show that the groundwater beneath Narrabri doesn’t need to be put at risk by Santos’ polluting gas field – we can have exciting new jobs and industries without considering this destructive proposal.”

The Central-West REZ may also likely end up unlocking more than 3000MW because of the complementarity of energy resources in that region, the NSW government says.

Lopetegi about éver Banega: When he plays well, the whole of Seville plays well
Sanchez received 7.5 million pounds from Manchester United for terminating his contract
Javi Martinez is Interesting to Renn. The club will play in the Champions League
Fonseca Pro 0:2 with Sevilla: Roma deserved to lose
Manchester United are ready to sell Lingard. He has scored in the last two matches
Dzeko Pro 0:2 with Sevilla: Roma never got into the game
Sergio Region: Sevilla are determined to win the Europa League. We want to win everything we can
Source https://www.smh.com.au/national/nsw/new-renewable-energy-zone-to-almost-match-nsw-s-coal-fired-capacity-20200709-p55agh.html?ref=rss&utm_medium=rss&utm_source=rss_national