E-scooter speeds will be reduced to 12km/h on footpaths and helmets and bells will be compulsory from November 1, as Queensland Transport and police begin a blitz on “cowboy” riders.

On “shared paths” – where pedestrians, cyclists and e-scooters share a path – the speed limit for e-scooters will be 25km/h from November 1 and fines now around $130 will be increased. 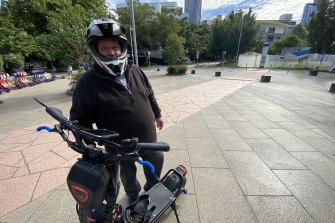 Tougher fines – influenced by the $1033 fines recently introduced by driving while distracted by a mobile phone – will apply across Queensland from the end of the year, Transport Minister Mark Bailey said.

He said “on-the-spot” fines for thoughtless behaviour on e-scooters were being discussed with police.

“We will have more on that when we work through the definitions with police.”

Queensland flagged the tougher controls in February 2022 and on Sunday released a safety action plan for e-scooters – and other personal transport devices – which lays out e-scooter parking guidelines and timelines. 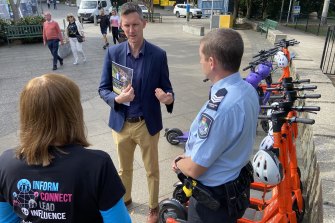 “While most of the scooter riders are doing the right thing in terms of speed, we do see some private scooters out there doing well over the 25km/h,” Bailey said.

“I’ve seen it myself, they might be doing 45km/h, 50km/h even and that is the equivalent of someone driving a car at 150km/h.

“We are going to crack down on that from now. If you are one of those people doing those sorts of things and think you are going below the radar, well it’s just a matter of time before you get caught.

“If you hit a pedestrian at 45km/h, it is a very dire situation.”

Police on Sunday said they had to intervene frequently when some e-scooter drivers were so drunk they had to be arrested on the spot and taken to hospital for blood tests.

“I’ve done it myself where I have had to arrest people outright and take them to hospital and take blood for readings,” he said.

“With the popularity of the devices and increasing amount of hire devices, we are finding that people do got out and drink.”

Sergeant Hill said police would begin a crackdown on e-scooter riders in the city, West End and Fortitude Valley because they were a popular form of transport in the inner city.

Police checks will then shift to Gold Coast, Logan, Mackay and Hervey Bay, he said.

Tougher penalties will be in place “by the end of the year”, Bailey said.

“People need to understand, these tougher penalties are coming. If you are doing the wrong thing sort it now, and you will be right.”

E-scooters can be used legally on roads “without a white line down the middle”, Bailey said.

“But where you get a lot more volume of traffic or where there are white line markings down the middle, then you are not allowed on them.”

Paige Armstrong from the Queenslanders with Disability Network said scooters that were “left lying around” remained a major problem with people with disabilities.

“People with disabilities have been challenged in walking along footpaths when they have had scooters coming up at 25km/h – actually more – and people being knocked.”

She welcomed the action plan announced on Sunday laying out timelines for bells, speed reductions and parking improvements.

“We think that Queensland may well be the first state to introduce such a comprehensive plan.”