The clock may not begin ticking on the 25-year agreement to stage grand finals in Sydney until the delayed NSW stadium network is ultimately delivered, increasing the chances of a decider being lost to Brisbane.

After this year, the earliest ANZ Stadium will be able to host a grand final is 2023, forcing the showpiece event to different venues for three consecutive years. Given the original memorandum of understanding struck between the NRL and the NSW Government allowed for only one grand final away from the Homebush Bay precinct – at the SCG in 2020 – Rugby League Central is seeking compensation from the state government for the loss of revenue resulting from taking the game to smaller grounds. 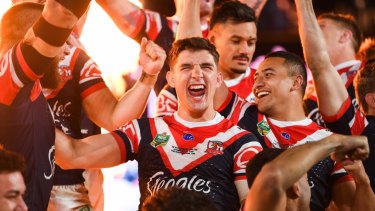 Where will the 2021 grand final end up?Credit:NRL Photos

Even still, there is a strong desire from the NRL to take a game to Brisbane. It would be the first time a decider has left the Harbour City, a disastrous outcome for a government that has already spent $2.2 billion to bring Allianz, ANZ and Bankwest stadiums up to standard.

The NRL has crunched the numbers and believes it will lose a combined $20 million in gate and corporate takings by staying in NSW and playing again at the SCG in 2021 and Allianz in 2022.

Allianz, previously known as the Sydney Football Stadium, hasn’t hosted a premiership decider since Brisbane beat Canterbury in the final game of 1998. There’s a feeling the novelty of going to the rebuilt ground as a one-off would be acceptable to the NRL if compensation is provided to offset the loss of earnings of having ANZ Stadium unavailable. But the prospect of two consecutive deciders at the SCG has little appeal to the governing body due to the relatively poor spectator experience that comes with watching league at a cricket ground.

The SCG hasn’t hosted a grand final since 1987, the year Manly beat Canberra to lift the Winfield Cup.

If the 25-year agreement to keep grand finals in Sydney commences once the stadium network has been rebuilt, the grand final will remain in Sydney until at least 2048.

Melbourne has expressed an interest in pinching the grand final if it is up for grabs after successfully hosting a number of State of Origin games in recent years. However, Brisbane’s Suncorp Stadium is the favourite to host the match in 2021 if the NRL and the NSW Government fail to come to terms.

The NRL has raised the prospect of seeking compensation in the form of land packages, a move that would allow it to relocate its headquarters. However, it is understood this isn’t a preferred outcome for either party and several other options will be more vigorously pursued.

The NSW Government is keen to strike a new agreement given the delays in rebuilding and renovating the network has shifted the goalposts on the original memorandum of understanding.

Ziyech came to Chelsea
Rakitic on moving to MLS: We'll see. Maybe Beckham will call me
Ole Gunnar Solskjaer: When do we start next season? Uncertainty is in the air
Dybala will receive 12 million euros a year in See. Extending the contract with him is the club's priority
Zlatan about the invitation to Monza: Galliani told me: Your old Milan is 11 km from Milan
Manchester United consider Dembele as a cheaper alternative to Sancho
In Bulgaria, too, there are problems with the virus: there are 16 cases in one team (it seems that it was caused by one player of the opponent). But it reached the semi-finals of the playoffs!
Source https://www.theage.com.au/sport/nrl/new-twist-raises-chances-nrl-decider-could-leave-sydney-for-first-time-20190720-p5291v.html?ref=rss&utm_medium=rss&utm_source=rss_feed

Race-by-race guide and tips for Hawkesbury on Sunday

Clubs brace for AFL call to pack for Perth

Friends and family paddle out in tribute to Alex 'Chumpy' Pullin

Waiting for the great border crossing in the virus age

Close relationships are key to resilience and optimism during isolation

Young Charlie and the Chocolate Soldiers run riot against Sharks

Get cooking, get nude: Aged care resident's advice on lockdown, life and love

Get cooking, get nude: Aged care residents' advice on lockdown, life and love

DESPERATE ATTEMPT TO SAVE TEEN: Surfer, 17, dead in shark attack

The fixture fix: Get dull Hawks off Broadway

Eels are in great shape to break title drought, but don't book the engraver just yet

Poker players among more than 100 busted for breaching Melbourne lockdown

'We use music to help ourselves': Phantom tenor carries on in lockdown

Massive spike in demand for masks leads to sale restrictions

Travels with my Aunty

Where the doughnuts are good for you