Buffalo Bills cornerback Vontae Davis has seemingly retired from the NFL midway through their clash against the Los Angeles Chargers, telling coach Sean McDermott he was done at half-time and swiftly drawing the wrath of his teammates.

McDermott spoke with reporters on Sunday (Monday AEST) after Buffalo's 31-20 loss to the Chargers and explained 30-year-old Davis voluntarily left the game in the first half and did not return. 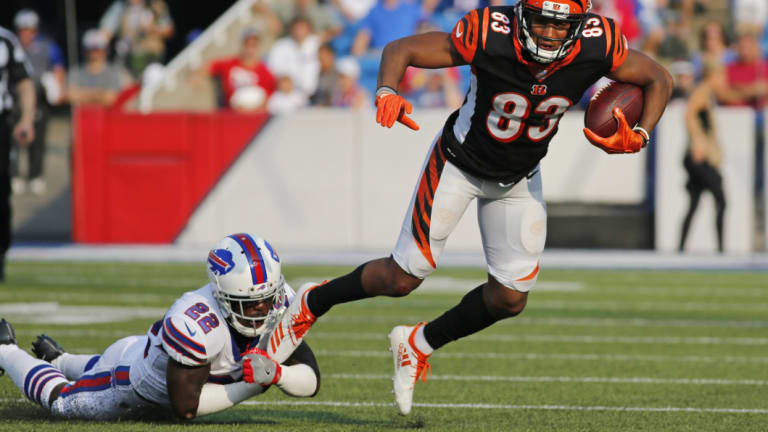 Abrupt: Buffalo's Vontae Davis (left) walked out on the team at halftime.

"He pulled himself from the game. He told us he was done," McDermott said, as reported by the Buffalo News. "When I get back there (to the locker room), we'll continue to communicate and get things figured out. I wish I had a better answer."

McDermott had no further insight on why Davis decided to stop playing, but the 10-year veteran - who was not injured - later took to Instagram in an attempt to explain his actions.

Davis was a surprise omission for the Bills' season-opening 47-3 loss at Baltimore last week, despite his coach saying he was not injured at the time.

He was the planned starter on Sunday against the Chargers, but at some point in the opening half took himself out of the line-up despite the secondary also losing Phillip Gaines to an elbow injury.

Without Davis and Gaines, the Chargers built a 28-3 half-time lead. ESPN reported Davis changed out of his uniform and left the stadium at the main break.

Bills teammates were perplexed and angry upon hearing the news.

"I never have seen that. (Youth competition) Pop Warner, high school, pros. Never heard of it. Never seen it. It's just completely disrespectful to his teammates.

"He didn't say nothing to nobody. I found out going into the second half of the game. They said he's not coming out, he retired. That's it."

"I did lose respect for him as a man," Bush said. "To quit on your teammates when things aren't going so well in the middle of a game ... that's definitely disrespectful."

Davis played just five games in 2017 with the Indianapolis Colts before suffering a torn groin muscle. Last season marked the first in Davis' career that he did not record an interception.

Never heard of it. Never seen it. It's just completely disrespectful to his teammates.

He was a 2009 first-round draft pick by Miami and played three seasons (2009-11) with the Dolphins before suiting up for the Colts for the following six seasons.

He signed a one-year, $US5 million ($6.99m) contract with the Bills this offseason.

Lloris about the fight with Son: It's part of football. Sometimes this happens
Mourinho won the 200th match in the Premier League. Only Ferguson reached this mark faster – just 4 matches
Jose Enrique: Liverpool need a playmaker. Is there a better option than Coutinho?
Leonardo wants to see Allegri at PSG, but the club still trusts Tuchel
Manchester United and Liverpool want to sign 15-year-old Sochaux defender of Kambala
Lloris and Son almost got into a fight after the 1st half with Everton. Before the 2nd, the players made up
Massimiliano Allegri: I am Looking for a project that will have ambitions to win
Source https://www.theage.com.au/sport/nfl/nfl-cornerback-davis-retires-at-halftime-of-buffalo-s-loss-to-la-20180917-p5048x.html?ref=rss&utm_medium=rss&utm_source=rss_feed