The NSW government will inject $50 million into the state’s creative and cultural sector to resuscitate arts companies suffering severe financial distress due to the coronavirus lockdown.

The rescue package was the largest of its type offered by any Australian state, NSW Premier Gladys Berejiklian said, and intended to ensure the survival of "some of the most significant arts and cultural organisations across NSW". 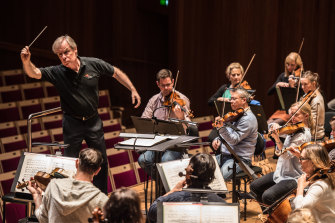 The Sydney Symphony Orchestra is one of a string of arts companies set to benefit from the decision.Credit:Wolter Peeters

"We know that the arts is a place of refuge and a source of inspiration in these challenging times," she said.

Sydney Theatre Company, Sydney Symphony Orchestra, Opera Australia, Australian Chamber Orchestra and Australian Theatre for Young People are among the likely beneficiaries of the new state initiative. All have been hard hit by the pandemic.

The highly anticipated lifeline, to be delivered in two stages, was applauded by Belvoir St Theatre's artistic director Eamon Flack who said the award-winning theatre company was likely to run out of money before the end of the year if it could not operate at "full scale".

"It pulls everyone back from the cliff edge," he said. "I think this money on the table is the best show of support we've seen since day one and it's a huge relief, but it will be good to see the details."

Carriageworks went into voluntary administration on May 4, a pointer to serious liquidity issues facing arts companies whose box office revenues have been decimated by the coronavirus shutdown.

Opera Australia's chief executive Rory Jeffes said his company was still at the point where there were "enormous threats to the existence of the company in 2020" and into 2021.

"It's going to be beyond September until we're back in the theatre with sizeable audiences, so while we are subject to health restrictions we are going to need support," he said.

"NSW is the home of so many great arts and cultural institutions and live performance is going to be one of the last sectors to generate its own income."

The $50 million initiative is on top of $6.34 million announced last month by the government arts agency, Create NSW, to support independent artists and small to medium arts, screen, and cultural organisations.

Under this latest plan, not for profit organisations funded by Create NSW are eligible along with other arts bodies based on an assessment of their economic and cultural importance.

More than 100 performing arts companies, museums and galleries and festivals could qualify.

Successful organisations can use approved funding to cover urgent expenses such as rent, utilities, and staff salaries; as well as funding sets, costumes and commissions for new productions when they reopen.

Create NSW will assess an organisation's finances before making recommendations to NSW Treasury for the release of funds.

"The Rescue and Restart package is intended to assist NSW arts and cultural organisations to hibernate, so they are in a strong position to restart operations when health guidelines permit," he said.

"We eagerly await the detail and remain hopeful this assistance may ameliorate the catastrophic circumstances we are in," he said.

"Our primary concern is not to lose any organisations through the negative commercial consequences of COVID-19. The secondary concern is to replace the hard-fought cash lost by those companies who are drawing down heavily on their reserves."

Mr Jeffes said the initiative would enable companies "like us who employ large numbers of artists ... to give them a sense of hope that after the stand-down they will be able to do what they know best - to delight and inspire audiences". 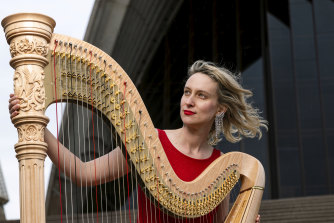 Harpist Georgia Lowe has lost 40 to 50 per cent of her income in the shutdown.Credit:Dominic Lorrimer

Harpist Georgia Lowe is one of those artists, a casual musician with Opera Australia Orchestra and Sydney Symphony Orchestra. She has lost 40 to 50 per cent of her income in the shutdown.

Lowe now plays the occasional digital concert and teaches. She misses stage performances: "Not just the financial side of it, but the stage, the audiences, the feedback after – it really gives you a high."

Messi is healthy and ready to train. He will be able to play against Mallorca
Gasperini on criticism from Valencia: This controversy is offensive and ugly
Giovane Elber taped his mouth shut to avoid getting a red for talking. But all the same I left – I hit the opponent with an elbow
Barcelona will not receive additional funds for transfers in the summer. The club will only be able to use the money from sales
Barcelona offers 80 million euros and Firpo Inter for Lautaro
In Denmark, they rethought Matchday: they collected 8 thousand in a car theater and are sure that you can make money on it
Lallana is likely to move to Leicester on a free transfer
Source https://www.smh.com.au/culture/art-and-design/nsw-arts-companies-win-50-million-lifeline-20200523-p54vpw.html?ref=rss&utm_medium=rss&utm_source=rss_feed

'Nothing is stopping us': Black Lives Matter protesters to push ahead

‘Little faith left in the system’ as premiers ‘cower to left-wing protesters’: Credlin

‘Pathological hypocrisy’ at the heart of UK race-based protests

'Football needs a home': FFA to lobby government for new base

Agony and ecstasy of ballet captured in Chengwu Guo documentary

'I want to prove it wasn’t a fluke': Innes chases Stradbroke dream

Police search for Perth teenager missing since May

AFL players to thrill and chill at new-look Big Freeze

Australia watches in horror as US goes to the brink

This NRL club is rotten to the core

Lions take a knee in stand against racism

Police accused of brutality in Buffalo, NY as elderly man pushed to the ground

‘Do not go, do not attend: Health Minister urges Australians to avoid mass protests

One-off payments offered to workers struck down with COVID-19

‘He was cheating on his lunch break’

McGuire to broadcast AFL across the States

Tedesco cleared of coronavirus as Bulldogs sweat on Lamb result