Crown’s casino licence for Barangaroo was suspended in late 2020 amid the Independent Liquor and Gaming Authority’s damning public inquiry into its operations, which found Crown was unfit to operate.

The inquiry’s report, released in February last year, found Crown needed a management overhaul if it ever wanted to hold a casino licence, and the state’s gambling regulator should reconsider James Packer’s involvement.

The gambling watchdogs in NSW and Victoria have given the green light for Blackstone’s 8.9 billion takeover bid for Crown.

On Thursday Crown confirmed that the Victorian Gambling and Casino Control Commission (VGCCC) and the NSW Independent Gaming and Liquor Authority had approved Blackstone’s proposed acquisition.

VGCCC said it the approval came with “stringent conditions which balance delivering stronger controls on the casino and ensuring it continues to be the flagship casino in Australia”. 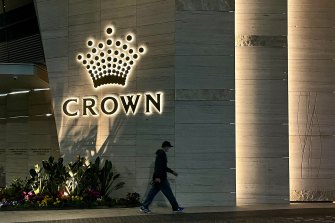 Crown’s buyer Blackstone has received the tick from regulators in NSW and Victoria.Credit:Will Willitts

Crown is awaiting the go ahead from WA’s gambling regulatory body before it seeks final approval from the Federal Court.