It may have not been as easy as post-game beers at Penrith Leagues club, but Panthers fans have managed to make the 2020 season work.

Ahead of Sunday's grand final, photographer and Panthers fan Lyndal Irons has shared her new project Outside the Stadium which has captured how Penrith supporters have managed to stay connected through a season disrupted by coronavirus. 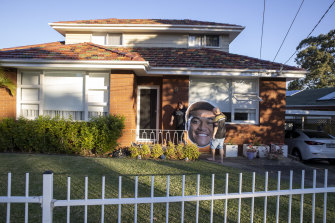 Paul Coles, Panthers supporter since 1990 and finance Tania Jessup carrying the head of winger Brian To'o . They run the Facebook fan page Panther Pulse. Paul surprised Tania with a proposal on the field at Penrith Stadium just before the start of their final home game for the 2019 season.Credit:Lyndal Irons

The project was commissioned by the Penrith Regional Gallery, with Ms Irons capturing the "quiet moments" of fans over the last month in the lead up to the grand final.

While being locked out of Penrith stadium, many took to online forums or Facebook groups to connect, Ms Irons said. Others decorated the footpath.

One woman from Warrimoo spent the COVID-19 season cultivating a patch of grass she sampled from the stadium, just so she could have a "sacred patch of turf" right at home. 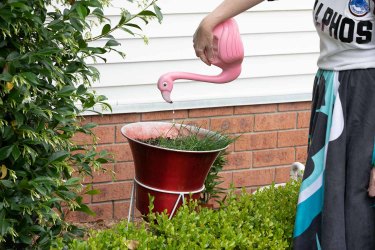 "It's been a difficult year for fans," Ms Irons said. "We thought it would be interesting to look at the connection between town and team and the way people are creatively looking to connect and demonstrate their fandom outside the stadium context."

Ms Watling started supporting the team soon after migrating to the Penrith area from the UK in 1978, where she found a family-like community to which she could belong. 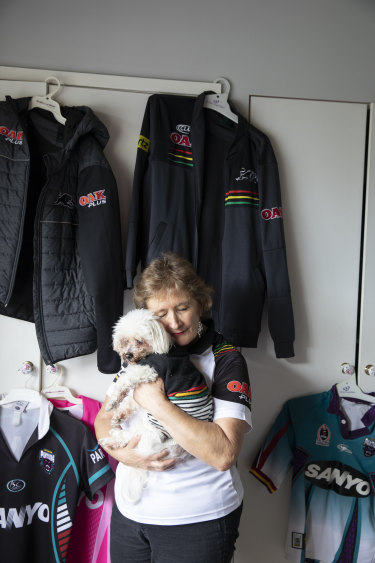 Sue Watling and her dog Angel are both keen Panthers supporters with matching jerseys. Sue took to the team soon after migrating to the area from the UK, finding a family-like community to belong to. Sue says "When we had Trent Merrin he was like an ambassador for the club. And we’ve got that with James Tamou. You see ‘em, they go around the schools, they go around the hospitals. And I don’t know about other clubs, but that’s what we have, and when you see it on 360 and 100% Footy, that’s what they say about us. The west gets together, you know?"Credit:Lyndal Irons

"They're some of the most passionate people I've ever met," Ms Irons said of her photography subjects. "People have told me that the football season is when they're motivated to contact their brother once a year, or it's when they see their dad at games.

"It's not just about teams winning or losing, it's a massive part of people's social lives."

Another photo captures Paul Coles and fiance Tania Jessup, who have been running the Panther Pulse Facebook page to keep fans connected through the COVID-19 pandemic.

Mr Coles proposed to Ms Jessup before the start of Penrith's final home game for the 2019 season. When the season was cancelled this year due to COVID-19, Ms Jessup broke down in tears.

"In the world of professional football, Penrith is still such a local team in many ways," she said. "The club and the stadium has such a geographic footprint in Penrith." 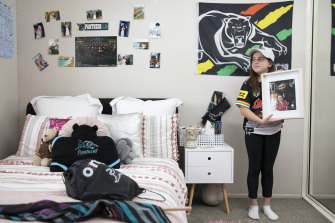 Rylee Randall, Penrith, is an 11 year old super fan pictured holding a memento of the first time she met her absolute favourite player, Josh Mansour. "I had a cake for my 10th birthday and it was a Josh Mansour jersey with a number 2 and it had Mansour on it, and it had photos of the times I met him. And I’m kind of like an over-obsessive fan. Everything I have is Panthers themed … everything I do is Panthers". Credit:Lyndal Irons

Ms Irons has been taking these photographs since Penrith's final home game on October 2.

The photographs will be displayed on the windows of the Joan Sutherland Performing Arts Centre after the grand final - whatever the result may be.

"As for the team itself, there is certainly that underdog narrative," Ms Irons said. "People say they really feel the team is playing with and for each other, and it's not just about ego or money."

'Outside the Stadium' by Lyndal Irons documents Panthers fans during the 2020 NRL finals season. Commissioned by Penrith Regional Gallery for presentation at the Joan Sutherland Theatre from October 31.

Liverpool are Interested in 21-year-old Leipzig defender Konate
Niko Kovac: I'm Waiting for Golovin to return. But it might be better to wait another week or two
Suarez's Italian language examiners were suspended for 8 months. An investigation is underway against the Director of Juve Paratici
Zinedine Zidane: I Never felt untouchable at Real Madrid. Criticism is normal
Marca made a Grand Declaration of love to Ramos. On the front page-100 reasons to extend Sergio's contract with Real Madrid
Manchester United can invite Tuchel. The coach of PSG is Interested
Napoli stadium renamed in honor of Maradona
Source https://www.smh.com.au/sport/nrl/online-forums-and-nail-arts-how-panthers-fans-built-the-momentum-from-outside-the-stadium-20201023-p5683t.html?ref=rss&utm_medium=rss&utm_source=rss_feed

A lack of strong policies and strong leadership

What is forest bathing and should I try it?

Outcry as another suburban motel is used to detain refugees

As the commute returns, city workers jump on electric bikes

‘EXPLOSION OF CASES’: US suffers ‘deadliest stretch’ in history

Move over, Blue Poles: Jeff Koons is about to deliver us his startling new artwork

'I was broken': The crisis that led one of the world's best ballet dancers to call Australia home

She fell in love with a man called Trust: 'I remember looking at him and just knowing'

Barry Gibb: 'I pray for music to come back in a more romantic way'

The multifunction outfit so right for our times

All over the US, people are having awkward conversations

How do I survive a dinner party dress-up?

Even in the age of lockdown and masks, lipstick holds lasting power

Budgie smugglers are back – and more brief than ever

If comfort is the legacy of pandemic fashion, where do heels fit in?

Smarten up your summer skincare routine with sustainable sun protection

Morrison faces a balancing act in dealing with China's wrath

Parramatta the perfect setting for our next step as a nation

Recovery vs regression: How countries coped with COVID

Why we love explainers

Doyle lands some big ones but throws Gosford back

Tigers had to straighten up 'irritated' Hardwick to avoid derailment