Podcasts can be incredibly niche affairs, allowing creators to indulge in their obsessions without chasing mass market appeal. Case in point is comedian Tim Ross' latest, House Stories; a short run series on the rarely seen tapestries of the Sydney Opera House.

When I mentioned how niche the subject matter was, Ross laughed and pointed to the recently wildly successful Netflix documentary, My Octopus Teacher, as evidence that "a great story is a great story, despite what it’s about." 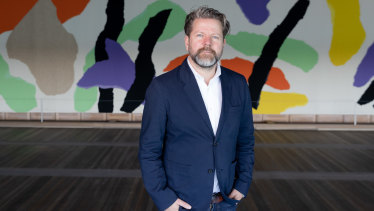 The tapestries were commissioned by the Sydney Opera House, and were an immediate hit with the public, Ross said, yet these incredible artworks were taken down after just two years on display.

"Everyone loved them. The explosion of colour, when you come into the theatre, to get you ready for a performance…" They were possibly too popular. Rumour has it the tapestries were removed after theatre companies complained they were overshadowing the performances on stage.

The tapestries frame each episode, giving Ross an excuse to explore Australia's modern history, and our sometimes cavalier attitude toward art, architecture and design. It also becomes a fascinating oral history of the Sydney Opera House.

"A million years ago, in the very early days of podcasting, I was fascinated by the opportunity as a broadcaster to do something a little more niche. I had a quite bonkers podcast called Original Pirate Material… I understood its potential right away," he said

But until now, Ross' main focus has been on his stage show, Man About The House, which has toured modern architecture venues around the world.

"I love working live, after spending too much of my life behind a microphone. But this year changed all that… It happened pretty quickly, all the plans for a national tour and other things just disappeared."

Ross began looking for new projects with a "digital bias", and remembered an event he attended at the Sydney Opera House a year earlier.

"I’m obsessed with the Opera House. You can’t get sick of it, you can’t get bored with it. There’s something about the building that stirs up controversy. And it disappoints people associated with it in some ways, and it’s broken a bunch of people's hearts. But of course, it’s also made a bunch of people really, really happy."

Peter Wells interviews Australia's best podcasters every week on his podcast, Meta. Subscribe in Apple Podcasts or wherever you listen to podcasts.

Chiesa scored for the first time for Juventus-Dynamo Kyiv
Griezmann scored for the first time in 3 consecutive games for Barca. He has 5 goals in his last 7 matches for the club
Braithwaite has scored 5 (4+1) points in Barca's last 3 games. He had not scored in 13 games before
Pavel Nedved: Juventus doesn't depend on Ronaldo. Any team will miss such a player
Holand and Jan will not play Lazio due to muscle injuries
Van Persie about meeting Maradona: he kissed my left foot and said it was the same as his
Bale doesn't need to prove anything. His presence inspires the Tottenham players. Davis on the midfielder
Source https://www.theage.com.au/culture/tv-and-radio/opera-house-s-tales-of-tapestries-20201019-p566cw.html?ref=rss&utm_medium=rss&utm_source=rss_culture

The day she was meant to be put down, rescue dog Maya found her calling

The age of tech has been an age of stagnation

'This is not going to be easy': Tech billionaire on a collision course with Microsoft

Should Queensland's Chief Health Officer retain 'unfettered power'? Public to have their say

Biden adviser says US stands 'shoulder to shoulder' with Australia

American Airlines puts Boeing 737 Max back in the air

No time for fringe dwellers as Wallabies go all out

Tim Horan: How rugby can win over a new legion of fans

Hodge set to start at fullback as O'Connor return confirmed

Arecibo Observatory Instrument Platform Seen Before and After Collapse

Snow Falls on Tumbleweed Snowman as Temperatures Drop in Albuquerque

Jet Disappears in Cloud of Snow at Rochester Airport

'Plenty of people out of pocket': ASX outage could trigger class action lawsuit

Ivanka Trump’s time at the White House is about to end. Is her political career about to begin?

New Hampshire Legislators Bundle Up for Outside Session Amid Coronavirus Concerns

‘There’s Nothing I’d Like Better Than a Pint’: Irish PM Defends COVID-19 Restrictions

Damning figure that shows Budget is a bust

Brief relief before heatwave back with a vengeance

ABC right to pop Canberra bubble on behalf of voters

'Somebody could be held out for five years': De Belin's lawyer slams NRL rule

How do we find a better place with China? Hint: don't start from here

Your Daily Horoscope for Thursday, December 3

The rise of health and wellness trends for dogs

Andrew Bolt does the bolt to the coast

Washington's the limit for Sky; Bolt for the coast

Takeover accounts: Federal police to get powers to tackle the dark web

Being acknowledged is the first step to being included

The tale of the lonely button wrinklewort

‘Tis’ The Season For a Blizzard’: Snow Blankets Northeast Ohio

Two Hospitalized After Stabbing in The Hague

Speaking to a robot could flag early warning signs of dementia

Outlandish claims, no matter how disgusting

Jenni primed to strike in Cup, but is there a flaw?

Drone Footage Shows Damage After Tornado Touches Down in Montgomeryville

How Queensland compares in the battle of the budgets