The state government's reluctance to "cede control" over who can come into WA to the border policies of other states remains the main barrier to WA reopening to other COVID-free jurisdictions.

Across the nation, every jurisdiction is closed to Victoria – and most to New South Wales. 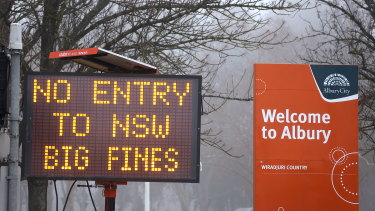 Every jurisdiction remains closed to Victoria following a second wave of COVID-19 infections in the state. Credit:Getty

However, WA Chief Health Officer Andy Robertson said weak points in the South Australian and ACT border policies – which permit travel from NSW – were causing concern for the government as they could lead to cases border hopping into WA if it were to partially reopen.

In health advice provided to WA Police Commissioner Chris Dawson on October 14, Dr Robertson said Victorian cases would likely continue to seep into other states, saying other border measures were "unlikely to be sufficient to prevent importation and community spread, particularly to neighbouring states, with ongoing reports of imported cases in NSW and South Australia".

An analysis of the success of each jurisdiction's border policy in containing the interstate spread of coronavirus since Victoria's second wave closures found a total of three cases breached the protective measures over four months.

A cluster was sparked in Queensland in July after two women returning from Melbourne via Sydney allegedly lied on their border declaration forms in order to skip 14 days mandatory hotel quarantine.

Their infections initially led to a cluster of five cases and were the likely source of another cluster of at least 48 infections.

The third case was a truck driver who travelled from Victoria into South Australia by road in July. As the man was considered an essential worker, he was exempt from quarantine requirements. His infection sparked a cluster of five cases.

Both outbreaks have since been contained and South Australia and Queensland have returned to their elimination status of the virus.

Just one case seeped into WA from Victoria as a result of the second wave. The returning fly-in, fly-out worker was quarantining at home when his infection was detected and posed no threat to the community.

It is a similar story for the 35 other cases which seeped from Victoria into other states, with 33 being contained through the arrival state’s quarantine requirements.

However, in the days prior to the borders being closed between the ACT, NSW and Victoria on July 8, two cases entered the ACT without restriction and five entered New South Wales, some leading to community transmission.

What is the likelihood someone would border hop?

The recent arrival of New Zealanders border hopping into Perth following the opening of a travel bubble between NZ, New South Wales and the Northern Territory provides an indication of how willing people are to get to WA after more than six months being locked out.

In the first week of the trans-Tasman travel bubble, more than 100 Kiwis landed at Perth Airport, most with the required exemption to enter WA, and were placed into hotel quarantine. 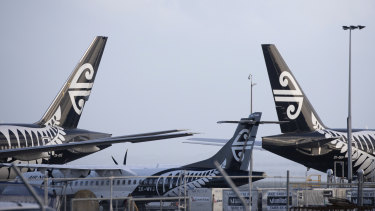 WA authorities are annoyed New Zealanders travelling to Australia under a travel bubble ended up in the state.Credit:Bloomberg

“Of course you can say you don't want people coming from New South Wales to South Australia then going to Western Australia, you can stop that – and to a certain extent you can," he said.

"But what we've learnt is that people are incredibly inventive and as a result of that, they would do and say a range of things to circumvent jurisdictions and the rules they have in place.

"From that point of view, Western Australians are right to observe the travel bubble proposal with some caution.

"At this point in time we believe, and the events of this week bring into sharp focus, that a travel is by its very definition easily popped."

Queensland – which like WA has also eliminated community spread of coronavirus – currently has its border open to South Australia and the ACT, meaning it is susceptible to people from New South Wales border hopping into the state.

A spokesman for Queensland Police said anyone entering Queensland was required to complete a border declaration indicating whether they had been to a COVID-19 hotspot in the past 14 days.

"Officers also use available information and intelligence from a variety of sources to verify their declaration," he said.

"The QPS has been satisfied with the overall compliance of the Chief Health Officer's border direction with only a small percentage of travellers failing to comply.

"On one occasion, a 22-year-old Weipa man was issued a $4003 infringement notice after being intercepted in Cairns Airport on August 4 after flying from Canberra. Police allege he failed to declare he had been in Sydney, a COVID-19 hotspot, two days prior." 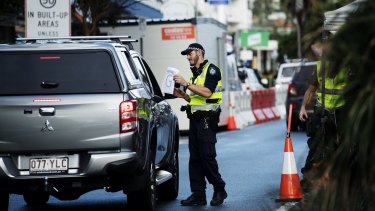 A police checkpoint in Coolangatta on the Queensland-NSW border.Credit:Elise Derwin

Since July 10, Queensland police have issued 176 penalty infringement notices and served 20 notices to appear in court for non-compliance with a border direction.

Since August 8, 355 travellers have been refused entry at Queensland airports while 6,160 vehicles have been turned around at the road border.

What’s next for the border movements?

During a national cabinet meeting on September 4, all Australian jurisdictions except for WA agreed in principal to move to a national hotspot border policy by Christmas.

The policy, which is still being finalised, would ban travel from metropolitan areas which record a rolling three day average of 10 or more locally acquired cases of COVID-19.

By the drafted definition Australia could open now, according to statistics provided by Federal Deputy Chief Medical Officer on Friday.

"Of those, almost 80 per cent are actually overseas acquired, so that's back to that first wave you may remember early on in the pandemic where most of our cases are coming from overseas, [with] very few local cases.

"In fact, the 14-day rolling average now in Victoria is continuing to decrease. It's now 5.8 cases per day and 3.1 cases per day in New South Wales and that's stable with no other locally acquired cases elsewhere in the country."

In the meantime, NSW Premier Gladys Berejiklian said the border between New South Wales and Victoria could be reviewed in three weeks.

"We are very keen to see what happens in Victoria once further restrictions are eased because that's the real test," she said on October 19.

"And if Victoria demonstrates that they've ... upped their contact tracing capacity, that they're able to demonstrate they're not going to have uncontrolled outbreaks while they're easing restrictions, well that will give us confidence to open the borders."

Laporta on Messi's future: This is Barca's priority. I don't think Leo only cares about money. All the clubs in the world want to get it
The first conference League final will be held in Tirana on 25 may 2022
Spain will play Italy and France will play Belgium in the Nations League play-offs. The final tournament will be held in Milan and Turin
Solskjaer about Fred: He was lucky to stay on the field in the 1st half. His second yellow is not a foul
Real can fire Zidane if the club loses to Gladbach in the Champions League (COPE)
Barcelona will not pay players' salaries for January
Ramos is leaning towards leaving Real Madrid (Onda Cero)
Source https://www.theage.com.au/national/western-australia/other-interstate-border-policies-are-working-to-stop-covid-19-despite-wa-chief-health-officer-s-advice-20201023-p5683y.html?ref=rss&utm_medium=rss&utm_source=rss_feed

Two-year ban to a month: Naden could be first athlete in world to use new WADA code

Race-by-race tips and preview for Kensington on Friday

'No strategy': Drug possession compromise on the table to end bitter cabinet division

Volunteering is in a slump - it's time for some caremongering

Your Daily Horoscope for Friday, December 4

When family gets in the way of work

From the Archives, 1975: Hysteria as Bay City Rollers play Sydney

A not-so happy ending from Monument for porn-star pair

Our decision not to upset an aggressive ally

Ditch the wishlist and bring back the spontaneity of gift-giving

Call of the wild

Abolishing the law against public drunkenness is an important step

'Not a way to live': Scientists brace for bleak Christmas as COVID cash crunch hits research

Premier oversaw fund that set aside $5.5m for project pushed by Maguire

UN agency to remove cannabis from list of most dangerous drugs