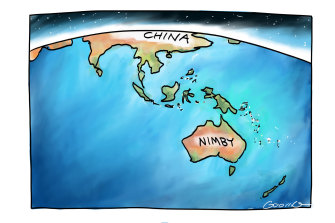 We were perplexed to read “Boxed In” (Sunday Age, 29/5), featuring a photo of Liberal leader Matthew Guy with Nicole Ta-Ei Werner and Gladys Liu – two Asian-Australian Liberal women. Then Jon Faine slammed the Liberals for, supposedly, lacking diverse candidates. He is wrong.

Fantastic female candidates have been chosen to replace outgoing men in the Liberal seats of Kew and Hastings, in Jess Wilson and Briony Hutton. We have female and ethnically diverse candidates in winnable seats across the state.

All have their own stories. Nicole’s maternal grandmother survived the Japanese invasion of Malaysia in World War II, hiding in the jungle. She is illiterate to this day. Nicole’s mum also grew up in poverty, but was determined that her children would have a strong education. Matt, the biological son a Greek immigrant, was born into the care of the state. If we are not diverse enough, who is
Nicole Ta-Ei Werner, Liberal candidate for the state seat of Box Hill and Matt Bach, state Liberal MP for the Eastern Metropolitan Region

Sir Gerard Brennan, as a judge of the High Court of Australia in 1992, wrote the lead judgment in the case of Mabo v Queensland, which abolished the notion of terra nullius and laid down forever the notion of prior Aboriginal occupation of Australian land. (The Age, 3/6). Would it be a more suitable Australia Day than January 26?
Barry Clark, Anglesea

The news we really want

Even if I am not much of a cook, it was inspirational to see vintage entrepreneurs like Maggie Beer and Stephanie Alexander featured on the front page for their skills and friendship (Sunday Age, 29/5). It makes a change from badly behaved politicians and footballers.
Hazel Edwards, Blackburn South

Geoff Parkes is to be commended for his efforts to get some compensation for “nashos” (national servicemen) who did not serve in a war zone (Letters, 4/6). There were, however, some benefits. I was supported when completing my tertiary studies with all fees, books and stationery paid, as well as the payment of the basic wage.
Chris Vasilopoulos, Fitzroy

Listening to the voters

“Unlike the foot soldiers of the major parties, [Monique] Ryan’s volunteers did not attempt to persuade voters. Instead, they asked what mattered to residents.” (Sunday Age 29/5). Wow, what a novel idea. I hope it catches on.
Anne Heath Mennell, Tenby Point

Re ‘Win’ for Premier on candidate picks″⁣ (The Age, 4/6). Has Victorian Labor learnt nothing from the federal election? Local branch members and their communities will not be too pleased with captain’s picks being jettisoned into Labor preselections without a local member plebiscite occurring first.
David Burt, Traralgon

The birth of a book

Jo Stanley’s article on writing your memoirs (Sunday Life, 29/5) resonated with me. I found the experience confronting but cathartic as well. I have just completed my book which is being published. When the completed copy was handed to me, I felt emotional. It was like having just given birth and I was holding the offspring.
Barbara Cohen, Brighton East

I travelled in Spain recently. Trains between Madrid and Barcelona leave on the hour. Travelling at about 300km/h, it takes three hours and has reduced air traffic between these two cities by about 60per cent. Links between other cities are as fast and often as frequent. Spain is committed to generating 74per cent of its energy sustainably by 2030.

For years, we have heard about the exorbitant costs associated with building a fast train network in Australia, but not the cost of not building it. The professionals we don’t train or employ to design and build it, the lost employment opportunities for people required to maintain and run it, and the resignation that the only way to get around, at great expense to our wallet and climate, is to fly.
Carolyn Cliff, Armadale

It is uncertain which is the more telling reflection: Tony Wright’s article – “Libs’ ‘forgotten people’ took the cash and ran” (The Age, 4/6) – or his (unfortunately ignored by some voters) damning article – “Liberals as far from Menzies as imaginable” (The Age, 17/5/19).

One can only agree that Tony’s father, like my Pop who was a staunch admirer of Robert Menzies, would be greatly disheartened. To say the least. Wright continues to write wonderful, evocative and pertinent articles.
Greg Norton, Box Hill

Clearly Victoria has a problem valuing our trees (Sunday Age, 29/5), whether it is in our parks, leafy suburbs, housing developments or forests. The confluence of poor planning regulations, ineffectual environmental laws, as well as meagre climate policies reflect a wider problem about the way we exploit our natural resources.

Our trees, vegetation and biodiversity are being extinguished at record levels, at the very time that we are also reaching record breaking temperatures on land. We have to reset our priorities to protect the very things that protect us.
Brenda Tait, Kew