More than 100 new emojis - including the coronavirus, the transgender flag and bubble tea - are set to be added to the pool of hundreds of expressive symbols on World Emoji Day on Friday.

World Emoji Day is held on July 17 each year because that is the date displayed on the calendar emoji, and although it is an "informal" day, many big tech companies including Apple and Samsung use it to launch their latest emojis. 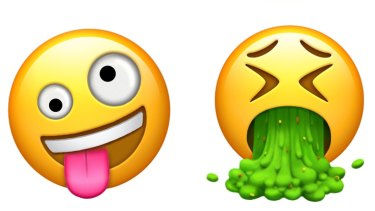 New emojis including a dedicated coronavirus emoji will join the favourites above.

Coronavirus had until now been represented in emoji form with the more generic microbe emoji.

Pop culture researcher Jess Carniel from the University of Southern Queensland said the additions each year usually filled some conversational need that was not being met with the current crop of emojis.

“I don’t know if people still want to be reminded in their text messages about the coronavirus, but that’s one of the emojis that are coming out, along with a group of related ones, some sciencey ones,” Dr Carniel said.

“And then in a big development this year you can actually 'sequence' emojis to create different emojis, so for example if you have the rainbow emoji plug the white flag emoji, it creates the rainbow flag.”

A small group of present sequences could be expanded in the future in the same way the base group of emojis had been, Dr Carniel said.

“It really illustrates the way in which emojis are part of our language now, and the way we can use them with the same kinds of rules we might use for words or letters,” she said.

“You think about the letters A, C and T, they’re just individual letters but you put them in the right order and you get 'cat' and this is the same sort of thing, it adds a new element to the way we communicate.”

Which emojis are available anywhere in the world is regulated by a single body, the Unicode Consortium, which sets the global standard for the underlying computer code that generates emojis.

They need to agree because all devices use the same code to generate the emojis; without it, devices from one manufacturer would not generate emojis sent from a device made by a different company.

Emojis were first developed on Japanese mobile phones and by the early 2010s had spread worldwide, and have since become increasingly integrated into language, especially on the internet.

In 2015 the Oxford English Dictionary gave emojis added legitimacy by naming the “Face with Tears of Joy” emoji its Word of the Year.

Emojis have also started to pop up in more official contexts, for example in Queensland where you can now get an emoji licence plate.

Dr Carniel said it would be some time before official documents or work correspondence would be conducted purely in emojis, but said they had become an increasingly important part of informal writing online.

“We do have particular boundaries still for different modes of communication, we talk to friends and family via text and social media in a different way from our boss, for example,” she said.

“But they are incredibly useful for conveying certain ideas and feelings. In fact, sometimes they can be more articulate for conveying those feelings than words themselves.”

Suarez made 9 of 24 passes, leading from the center of the field in the match against Bayern
Manchester United presented their away form for the 2020/21 season
Ferdinand on Barca breeding: Bad. They still rely on old-timers
Inter wants Perisic back, even if Conte remains in the team. Bayern hopes to buy the player for less than 20 million euros
Rudi Garcia on Lyon's chances against city: the quarter-Finals showed that the favourites can also be beaten
CSKA agreed a 5-year contract with Fuchs. The transfer is estimated at 7-10 million euros
Ferdinand on Messi at Barca: Will he want to stay, given the results and the team's performance? Does he have time to wait?
Source https://www.smh.com.au/national/queensland/our-phones-are-about-to-get-coronavirus-among-100-other-new-emojis-20200716-p55coe.html?ref=rss&utm_medium=rss&utm_source=rss_national