Part-time pay, full-time super: How one company aims to close the gap

When EnergyAustralia decided to revamp its parental leave policy, it wanted to not only encourage men to take time off when they had a baby but also tackle the gender superannuation gap.

“We know that women retire with significantly less super than men,” the energy retailer’s people and culture executive, Jodie Haydon, said. “That’s due to the double penalty of time out of work while caring for children and then returning to work part-time.” 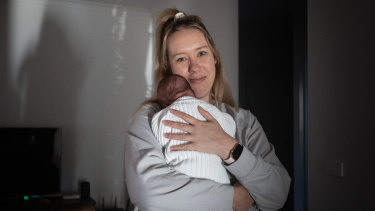 EnergyAustralia employee Cassandra Beswick is delighted she will be paid a full-time super benefit when she returns to work part-time.Credit:Jason South

Under its new policy, EnergyAustralia will provide 20 weeks’ paid parental leave to new mothers and fathers, with superannuation paid on both paid and unpaid leave.

In an effort to further close the gender super gap, employees who return to work part-time will be paid super as if they were full-time until their child turns five.

EnergyAustralia employee Cassandra Beswick, whose son, Kendrick, was born on May 21, said it was a relief to know she would continue accruing super while on parental leave.

“Knowing that I will also not be disadvantaged by returning to work part-time definitely makes me feel a lot more secure,” she said.

However, Wooldridge said the biggest reason for the gender super gap was the gender pay gap, with more than 85 per cent of Australian employers still paying men more than women on average.

Three in five employers now offered paid parental leave, the census found, but only 12 per cent of those who took it last year were men.

Six per cent of employers offered more than 18 weeks, although the most common length of paid primary carer’s leave is between seven and 12 weeks.

The agency said that the employers leading the way were offering gender-neutral parental leave that could be taken by either parent with no qualifying period, with leaders in the field offering as much as 26 weeks.

In 2019, alcohol company Diageo announced all Australian employees would be eligible to take 26 weeks of paid family leave regardless of gender, carer status or length of service.

The same year, ING became the first bank in Australia to introduce a gender-equal paid parental leave scheme, removing the labels of primary and secondary carer, and providing all parents with access to 14 weeks of paid leave. This led to more fathers taking it up: In the last year, 59 men and 50 women took paid parental leave, according to the Family Friendly Workplaces report, Bridging the Work and Family Divide.

Parents at Work CEO Emma Walsh said it was business that was leading progressive policy changes around parental leave in Australia.

She said the government-funded parental leave scheme – which provides 18 weeks of paid parental leave at the minimum wage for the primary carer and two weeks for “dads and partners” – was one of the least generous among OECD countries.

Walsh is also disappointed the Labor government has shelved its 2019 election pledge to add superannuation to the government’s paid parental leave scheme.

Minister for Financial Services Stephen Jones has said the government needs to complete an audit before determining whether it can add super to the scheme in its first term of government.

“I think that corporate Australia, in particular, continues to pave the way to show what a great scheme could look like,” Walsh said. “Progressive organisations do see it as a real talent-attraction strategy.”

Industry super fund HESTA, which contributes super for employees on paid and unpaid parental leave for up to 12 months, said progress would be slow unless the super gap was seen as a societal issue rather than a women’s issue.