Sweeping cuts to penalty rates have failed to deliver the jobs boost promised three years ago when workers were told to accept lower pay for the good of the economy.

A new analysis finds the lower rates did not lead to significant new jobs in hospitality and retail, the two sectors where workers lost their old rates for working Sundays and public holidays. 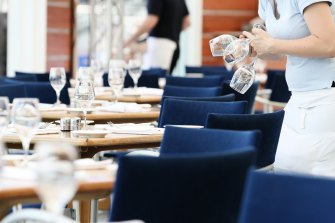 Today, an estimated one-third of the workforce work part-time.

Labor will use its findings to push for a “decent wage” for millions of workers in the wake of the coronavirus crisis, just as the Morrison government considers workplace reforms to fix “rigidities” in the rules.

The Coalition accepted the cuts to penalty rates when the Fair Work Commission announced them in early 2017 amid claims that employers would use the savings to hire more staff or keep workers on for more hours.

Labor innovation spokeswoman Clare O’Neil said the new analysis of figures from the Australian Bureau of Statistics refuted those claims.

“Wages were cut for no economic benefit. And the government stood back and did absolutely nothing,” she said.

“While jobs and hours worked across the economy grew significantly over the relevant period, the number of jobs and hours affected by the penalty rate cuts actually fell or were flat.”

Australia had 732,000 sales assistants and salespersons in May 2017, before the penalty rate cuts began, but had only 694,000 in November last year.

While the number climbed to 710,000 in February this year, before the coronavirus crisis forced huge job losses, it remained below the level before the penalty rate changes.

The number of fast-food cooks fell from 48,400 before the cuts to 47,700 last November, Labor said in its analysis of the official figures, but the results across job categories varied widely and some rose or fell at different points in time.

Labor said there were 522,000 people employed as managers in hospitality, retail and services but this had fallen to 518,000 by February this year.

Ms O’Neil, whose portfolio includes the future of work, said the results meant Labor and the unions would push for better pay rather than accept claims that lower rates would create jobs.

“We are currently on track for the future of work in Australia to be some of our lowest paid workers getting paid even less for absolutely no benefit in terms of more jobs and additional shifts,” she said.

“Parts of the country are racked with under-employment, and insecure work is like a cancer, eating away at the dignity of Australians.

“We can and should seek to do better by our workers on the other side of this crisis.”

Ms Birch cautioned against assuming causality between the penalty rate changes and the jobs data.

AMP Capital senior economist Diana Mousina said there were big differences in outcomes, with a strong rise in part-time jobs in accommodation and food services since late 2017.

“Over the year to November, annual growth in part-time jobs in accommodation and food was up by 3.5 per cent,” Ms Mousina said.

“And in February it was 9.1 per cent higher over the year.”

Ms Mousina said the retail sector had seen disappointing jobs growth in both part-time and full-time roles but this was shaped in part by the broader struggles of the retail sector and the structural decline in department stores.

“Before COVID the consumer backdrop was already weak in Australia – low wages growth, high household debt and poor confidence, which doesn’t bode well for the retail sector,” she said.

Mourinho on the NPL restart: the Players in Germany are already giving the world what they love, but we are not. We want to play
Lillian Thuram: my Classmates made me believe that being white is better. These were 9-year-old children
Manchester United are ready to raise the salary of England U20 midfielder Gomez to 1.5 million pounds. They are Interested in Barcelona and Chelsea
Tula Arsenal confirmed the hire Lisova and Lomovichi to the end of the season
Lautaro's compensation will only be valid from July 1 to 15. Barcelona must pay 111 million euros in one tranche
Florentin pogba signed a 3-year contract with Sochaux
Troy Deeney: People wrote about my son: I Hope he gets the coronavirus. This is the hardest part
Source https://www.theage.com.au/politics/federal/penalty-rate-cuts-did-not-create-jobs-labor-20200522-p54vn7.html?ref=rss&utm_medium=rss&utm_source=rss_feed

Paper cuts a wake-up call for a nation of locals

Victorians dobbing each other in led to more fines, says police chief

Cricket Australia's cash crisis claims to be put to the test

Bulldogs look to cardboard cut-outs of fans at games

‘NOTHING WAS DONE’: Teen boys’ home was in horrendous condition

Experts recount cost of bushfires and government must listen

Not so smart money: Inside the Dally M betting scandal

'These are not Mickey Mouse': TAFE NSW swamped by 100,000 enrolments for free courses

One man dead in shooting as Minneapolis protests turn violent

Countdown Show: KFC SuperCoach is back!

Offshore detention in PNG not value for money, Auditor-General finds

Troubled cargo ship to be unloaded at Port of Brisbane

Race-by-race tips and preview for Goulburn on Friday

Man charged with murder and aggravated burglary over Epping death

Bodies of man and woman found at home in Notting Hill

Lowe can't go lower - Morrison will have to lift the bar

These vine-clad hills will transport you to Italy

'Pretty decent injury': Hamstrung Franklin could miss half the season

The art of being versatile in life

Suspect in Kyoto anime arson recovers enough to be arrested

Big sprays: Booing could be a problem when crowds are allowed back at the footy

How one man accidentally bought a house

How working from home could save you $7000 a year

AFP sued by WorkCover over culture of bullying and harassment

'Not doing too well': Trip to visit dying mother derailed by quarantine

'There is no rush': Bott happy for Mr Dependable to earn his stripes

Yes, there is a right (and wrong) way to burn a scented candle

Workers ready to trade away arcane conditions, but a wage freeze is no way to start haggling

'She wants to win and get better': Day breaks through Sydney ranks

'She went there': bird watcher reflects on woman's racist remarks and her fate

Back to roots of music, jazz vocalist sings from home

Towards nothing: the sorry fate of a road safety summit

Latrell Mitchell returns at 106kg and ready for 80 minutes in the No.1

I'm quietly confident, but the Eels still have one Achilles' heel

SpaceX axes historic launch: Find out when it will lift off