Perrottet looks west to keep Coalition on the rails before election

As the former federal government was hastily announcing commuter carparks in Coalition seats ahead of the 2019 election, their state counterparts in NSW were shaking their heads. None too subtle hints to join forces to build big, nationally significant projects fell on deaf ears.

So, Canberra was left to focus on the small beer projects and NSW pushed on with its agenda. Since it swept to power more than a decade ago, the state government has been a big builder, pursuing mega developments and positioning itself as an infrastructure government. There has been a palpable sense of pride from ministers at the number of cranes in the sky – current count is 382, according to the latest crane index. Even the ongoing disruptions to the city have been sold as a positive, although frustrated commuters probably do not agree. 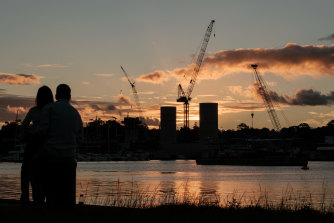 Work on the Rozelle Interchange, part of WestConnex.Credit:Oscar Colman

Sydney has resembled a permanent building site, as the government got on with constructing new roads and rail across the city. But after more than 10 years, the market has hit saturation point. The government now has to rethink it strategy and story ahead of an election just 10 months away. Its first step is to hit pause on some of its megaprojects, ones which have been announced amid plenty of fanfare but without much substance (such as a sound business case).

Some of these projects, including a link from Sydney’s northern beaches to the CBD, which was former premier Gladys Berejiklian’s pet project, have been election promises. Putting them on ice is a major political gamble, handing the opposition ready material with which to campaign.

Infrastructure Minister Rob Stokes has for months been sounding warning signs that delays to projects – although not cancellations, as he is at pains to stress – are inevitable. A perfect storm of labour shortages exacerbated by the COVID-19 pandemic and the eastern seaboard states playing infrastructure catch-up means the construction industry is at capacity. This week, the government’s own independent experts within Infrastructure NSW, the body originally set up to advise the O’Farrell government on mega projects after their landslide win in 2011, provided the perfect cover for the government to press pause. 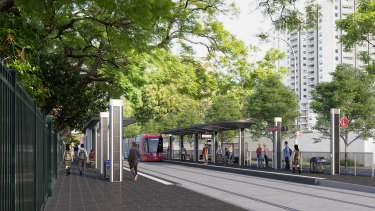 An artist’s impression of a Parramatta light rail stop at Harris Street.

In its five-yearly strategy issued on Tuesday, the independent body recommended that big projects – including the Beaches Link and the second stage of the Parramatta light rail – be put on hold. A host of others should also be delayed, including several dams. Infrastructure NSW wants the government to retain its level of infrastructure spending but redirect its $27 billion annual capital investment to smaller projects, which will deliver more immediate bang for the government’s buck.

Advice from the independent experts does not, of course, factor in the political implications of not delivering promised public transport or roads, especially in the electoral battleground of western Sydney, where the March election will be won and lost. On the same day its own experts released their report, the government had already taken the second stage of Parramatta light rail to its expenditure review committee for approval. It is one mega project from which the government does not want to risk walking away, and is prepared to ignore advice.

There are sensible reasons to continue with the next stage. All the tracks have been laid for the first section and passenger services will start next year, so it makes sense to keep going. Its price tag is likely to be significantly lower than other projects. The Beaches Link, for example, will be as much as $12 billion and is years away from even starting.

The extension, which is desperately needed for the public transport wasteland of Wentworth Point, will be a major selling point for the marginal Liberal seat of Paramatta, on which NSW Labor has its sights, especially after the party’s success there in the federal seat.

Speaking to the Herald ahead of the masthead’s infrastructure summit on Wednesday, Perrottet was adamant that the decision to push on with the second stage of the Parramatta light rail was above politics. Indeed, of all the projects, it made the most sense to proceed, he said. Never mind the advice from his own panel.

But the reality is, regardless of the logic behind the decision, Perrottet knows that he must show that his government is absolutely committed to western Sydney. He has to go to the election with one big ticket item for the west. His government can probably risk abandoning a project in the northern beaches. The same cannot be said for western Sydney.

The Opinion newsletter is a weekly wrap of views that will challenge, champion and inform your own. Sign up here.