Policing by numbers: why targets lead to abuse of power

Data obtained by Greens MP David Shoebridge reveals NSW police have been using numeric targets, which each command must meet, for stop-and-search and move-on directions. Numeric targets for police powers have no place in modern policing. 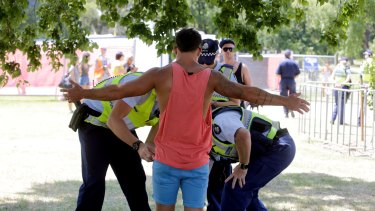 I say this as a researcher of both criminal law and criminology. From a legal perspective, targets are dangerous because they risk facilitating police abuse of their powers. An internal Victoria Police inquiry found in 2018 that targets for random breath testing were a key reason why police fabricated evidence to meet these targets.

To justify a stop-and-search, police must have a reasonable suspicion that the person has something unlawful on them. But an organisational imperative to meet targets incentivises police to conduct searches to meet the target, rather than meet the legal criteria according to each case.

Lawyers have been long concerned that police conduct arbitrary searches without reasonable suspicion. The Law Enforcement Conduct Commission (LECC) recently heard evidence that police do not lawfully apply reasonable-suspicion standards and don’t always record the reason for the search. Worryingly, strip searches more often than not find nothing illegal. This is consistent with evidence globally that very few general searches find anything and are disproportionately targeted at minorities and Indigenous people.

We know that in 2017 only 9 per cent of all searches resulted in an arrest because something unlawful was found. Last financial year there were almost 250,000 searches. When the majority of searches result in "no finds" it is a worrying indicator that police suspicion may likely not be reasonable. NSW Police and the LECC should audit every stop-and-search and move-on direction to see if reasonable suspicion is recorded, and if it is justifiable.

The debate in criminology about the effect of policing on crime is contested and there is no consensus.

Let's put to one side, for a moment, the fundamental issue that stop-and-search directions may not be for the purpose of crime prevention, but for investigating offences. If the majority of searches find nothing related to a crime, then the deterrent effect on a person who has done nothing appears dubious.

Police rely on a recent study by the NSW Bureau of Crime Statistics and Research, which found stop-and-search and move-on powers have a long-term impact on property offences but not assaults. However, this was a correlation, not a definitive cause of the reduction in crime. The study did not control for variables that are also recognised as having an impact on offending, such as changes in the economy.

More importantly, as BOCSAR recognises, the findings do not answer the question of whether the costs – such as the adverse consequences on civil liberties – are justified. The 10 per cent increase in searches required for a 2.43 per cent reduction in property theft would certainly risk systemic abuse of police powers.

Instead of targets for police powers there should be targets for justice outcomes that our communities desperately need, such as police targets to increase the rate of successful prosecutions for violence. That would mean ensuring well investigated briefs of evidence. Violence against women is the one category of offence that has been increasing, not decreasing, over time.

Police should establish a target for the number of young Aboriginal people they divert from the criminal justice system, as required under the Young Offenders Act.

And critically, our government needs to take more notice of the evidence that addressing social inequalities and the economic causes of crime provide a more powerful and effective form of justice than increasing police power.

Dr Vicki Sentas is a senior lecturer in the faculty of law at the University of NSW.

A low-fibre diet could lead to high blood pressure: study

Stop calling teens lazy, useless, and entitled if you won’t hire them

Epidemic must not be allowed to unleash AIDS-style hysteria

These designers are opening their fashion week shows to the public

'Zonked out': fears over too many prescription drugs in aged care

Governments urged to invest in roads, water, telecoms to protect against natural disasters

The end of coal-fired power can be managed or messy

Future on the land can be bright with the right leadership

A correct decision made for the wrong reason

Perfection at the park

Why you are feeling the pinch: Cost of living soars

The case for and against compulsory 12 per cent super

Australia Day honours are 'not the Logies', says Kennerley

What are you willing to pay for? (And what do you expect for free?)

The magic of capitalism: you're working less time to buy your daily bread

Your Daily Horoscope for Wednesday, February 26

When doing nothing might just be the best option

'The stakes are high': Australia urged to do more to avoid China-Taiwan conflict

The workplace right older workers don’t know they have

From the Archives, 1975: A grand splash of colour for League fans

CBD Melbourne: AusPost's nice work, if you can get it

'Lowest point of my life': Debra's long road back from sleeping in her car

Gobbo to sue police again, will claim they failed to protect identity

The changing face of earning a living

At least 15 dead in Iran from coronavirus

If Arndt knows what chivalry is, she'll give her Order of Australia back

Australia has ‘on a number of occassions’ deported spies: Peter Dutton

Man charged with murder over killing of Tony Mokbel associate

1000 locked down as virus hits resort

'You could go to two months': IOC heavyweight says time on Games' side

More Queensland students pulled from NAPLAN than other states

Calculating value of a home for aged care, pension purposes

Labor have ‘not just doubled down’ on its climate policy

‘Irresponsible road users wreck it for everyone’: NSW Transport Minister

Patterson shines as Test hopefuls fire blanks for Australia A

Gesticulating misophones on the move

Perth mops up after hail, heavy rainfall hits the city in peak hour

Sutherland leaves Bushrangers in control against Bulls at Gabba

Sports Minister: Australia will not risk health of Olympic athletes