The 23-year-old Australian, who is based in Melbourne, won the first set and had been in a position to go up two sets to one when he led 5-3 in the third set, but Garin, who won the French Open boys' singles title in 2013, stepped up again.

Some rare rays of sunshine bathed the Court Philippe Chatrier but Djokovic was not in the mood for enjoying a break in the weather as he won in 83 minutes, thrashing outclassed Lithuanian Ricardas Beranki 6-1, 6-2, 6-2.

As in his first round against young Swede Mikael Ymer, the 33-year-old met minimal resistance and with 153rd-ranked Colombian Daniel Galan up next, his only concern will be that he might arrive in the second week without a meaningful test.

Berankis, ranked 66th, managed only five games in his previous grand slam match against Djokovic at the 2013 US Open and it proved a carbon copy this time. 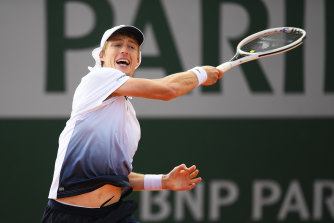 "Right from the blocks I want to bring in the intensity," Djokovic, unbeaten this year apart from his default at the US Open, told Eurosport. "I managed to do that in the past two matches. It's exactly how I want to roll into the match."

Djokovic's victory was his 70th at the French Open, moving him into joint second place on the all-time list with Roger Federer and a whopping 25 behind 12-time winner Rafa Nadal.

Meantime, fifth seed Stefanos Tsitsipas produced a clinical performance to outclass Uruguayan Pablo Cuevas 6-1, 6-4, 6-2 to advance to the third round.

The 22-year-old Greek needed more than three hours to rally from two sets down and beat little-known Spaniard Jaume Munar in round one and he could not have hoped for an easier second match.

Tsitsipas broke the 34-year-old Cuevas' serve six times while facing a single break point during his own service games and closed out victory in 88 minutes.

He converted his matchpoint when Cuevas sent a service return long and will next meet Aljaz Bedene, who defeated Nikola Milojevic 7-5, 2-6, 6-1, 7-6(4).

Former champion Jelena Ostapenko made a big statement by dismissing Czech second seed Karolina Pliskova 6-4, 6-2 in the second round in Paris.

Latvia's Ostapenko missed two match points after a double-fault but composed herself on the third opportunity to wrap up the contest in 69 minutes.

Karolina Pliskova's upset was not the only shock of the day as men's ninth seed Denis Shapovalov lost after a five-hour thriller against Spaniard Roberto Carballes Baena, who prevailed 7-5, 6-7 (5-7), 6-3, 3-6, 8-6.

"I'm really happy that I was able to bring myself to a winning position, and then in the end it's just a little bit unlucky," Shapovalov said.

Nagelsmann victory over Istanbul: Not fully satisfied with the game Leipzig was fatigue, not the most effective pressure
Goalkeeper Brugge Croat about 2:1 with Zenit: We proved that we should not be considered outsiders of the group
Manchester United won again in Paris with a late Rashford goal. An unexpected hero - a 22-year-old reservist who has not been on the field since December 2019
Jurgen Klopp: first Oliver didn't see the moment, then VAR forgot the rules. And the consequences came only for van Dijk and Tiago
Favre on the defeat against Lazio: Dortmund lacked determination. We needed to play an outstanding game, and we didn't
Lampard on 0:0 with Sevilla: I think both teams are happy with the draw
Tuchel Pro 1:2 with Manchester United: PSG were not on the pitch in the first half. One of the worst games of the team
Source https://www.theage.com.au/sport/tennis/djokovic-barely-breaks-a-sweat-to-advance-to-french-open-third-round-20201002-p5618j.html?ref=rss&utm_medium=rss&utm_source=rss_feed

Jury trials to return to Victoria in 2020

From Brad to Baz: Here's some early advice for Perth's new Lord Mayor

How to get your hands on a Claremont apartment for under $400,000

Time for WA to work smarter, not harder, when it comes to border lockdown

‘Arrogant’ Broncos told to ‘nick off’

WA girl, 11, who was victim of child sex abuse dies of self-harm

What a burden: the subtle pressure in Albo’s childcare vision

ASX futures higher on hopes of US stimulus deal

'Amateur, to be honest': Silvagni lashes out at the Blues

There are many reasons for the second wave

Motorist stabs passenger as the pair drive along a suburban street

That strange feeling of a city missing its grand final vibe

From the Archives, 1967: Geelong and Richmond in a grand final thriller