Premier Daniel Andrews has said 100 Australian Defence Force troops may have been offered to Victoria to help police ensure people were isolating at home, rather than to provide assistance with hotel quarantine.

The ADF on Friday issued a statement saying Defence Chief General Angus Campbell had issued orders for the ADF to be prepared to provide 100 personnel to each state at short notice. 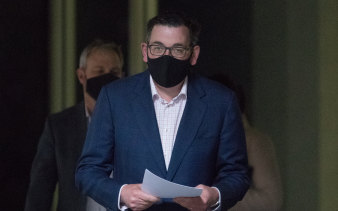 It said this was to "support potential requests for assistance from the states and territories for quarantine compliance monitoring and checking of self-isolation orders".

However, Mr Andrews – who told a parliamentary inquiry on Tuesday the ADF did not offer any support to Victoria’s hotel quarantine regime – has suggested the troops were on standby to assist with door knocking and back up for Victoria Police.

Mr Andrews said he was not disputing that 100 ADF personnel were on standby, but questioned whether they were for the purpose of Operation Soteria or Operation Sentinel.

"That (hotel quarantine) program is entirely different to ADF support to checking whether people are ... isolating at home, that's a very different program," he said.

A Defence source told The Age the ADF personnel were on standby for requests for assistance from the states and territories and not any particular operation.

The issue is fraught because genomic sequencing has indicated that a majority of Victoria's second wave of COVID-19 stemmed from breaches in hotel quarantine.

Mr Andrews has been repeatedly interrogated about the bungled hotel quarantine program at his daily press conferences and asked why private contractors were used to provide security rather than ADF troops, who assisted in Queensland and New South Wales.

Defence Minister Susan Reynolds has said ADF support was offered on multiple occasions and either refused or not taken up by Victoria.

"On March 28, 2020, Victorian authorities advised that Victoria was not seeking ADF assistance with mandatory quarantine arrangements," Senator Reynolds said in a statement on Tuesday.

He said he did not seek, nor did representatives of the ADF offer assistance as part of the hotel quarantine program on March 27 and 28.

Mr Andrews said Commissioner Crisp's statement was completely in accord with what he had said.

"I'm not going to, from this podium, conduct an argument with federal ministers, no matter how many of them you want to quote to me," he said.

"I am focused on one fight only and that is against this virus."

He said a request for assistance from the ADF was later superseded by a decision in June to use Corrections Victoria to supervise a reset of the hotel quarantine program after a breakout of coronavirus clusters.

"No criticism of anybody in the defence force but I think we can all agree that the people who run our jails are uniquely qualified to keep people locked up," he said.

Meanwhile, Chief Health Officer Brett Sutton has written to the Legislative Council re-emphasising his view that MPs and their staff who live outside Melbourne should not attend Parliament due to the "unacceptable risk posed by individuals travelling into the metropolitan area and then back into regional communities".

However, given some regional members did intend to attend the upcoming sitting, Professor Sutton recommended they avoid car pooling (other than with members from their household) and consider a self quarantine for 14 days when they returned home.

Barcelona's Interest in Isak Increased after Koeman's appointment. Larsson has a high opinion of the player (Mundo Seportivo)
Manuel Pellegrini: When you play against Real Madrid and var, it's too much
PSV and Porto are Interested in Barcelona midfielder PUC. He doesn't want to leave the club
Puyol about Barcelona: If we want to win the championship, we need to perform very well
Schalke sacked Wagner. The team has not won the Bundesliga since January
Iacini on 3:4 with Inter: Even a draw would be an unfair result, given how many chances Fiorentina created
Ramos Pro 3:2 with Betis: the Referee tried his best and didn't do anything intentionally
Source https://www.smh.com.au/national/victoria/premier-daniel-andrews-questions-purpose-of-adf-troops-20200814-p55lx5.html?ref=rss&utm_medium=rss&utm_source=rss_feed