No Andrews government minister has taken responsibility for the use of security guards that led to a second surge of the deadly COVID-19 virus in Melbourne.

And no senior government figure has even acknowledged they knew in advance that private guards would be hired for Victoria's botched hotel quarantine program. 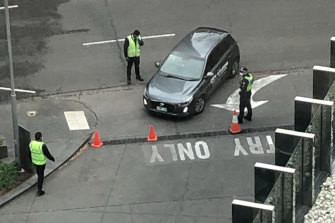 Guards and police at the entry of Crown Promenade last week. The hotel is one of 15 quarantine hotels in central Melbourne where returned travellers must spend 14 days in isolation.

At least five state government departments were involved in the decision to deploy private security guards, instead of soldiers or police, to keep watch over returned travellers locked in hotel rooms.

At least five travellers from Victoria's coronavirus hotspots were detected at Sydney Airport, where they face fines of $11,000 or six months' jail under NSW border restrictions, after flying in on Thursday.

The government is trying to contain outbreaks in the Melbourne's north and west, many of which have been traced directly back to the isolation hotels.

A $3 million inquiry into the scandal has been set up to find answers about the decision making at the start of the quarantine program.

Details emerged on Thursday of a bureaucratic snarl involving the departments of Health, Jobs, Premier and Cabinet, Emergency Management Victoria and the Victoria Police, which resulted in the decision to hire the private security firms whose employees are being blamed for carrying the virus from the hotels into the community.

The agencies and departments, working under the umbrella of Emergency Management Victoria, have wide powers to make far-reaching decisions when operating in an officially declared state of emergency.

Police and Emergency Services Minister Lisa Neville avoided questions on Thursday about which of her cabinet colleagues were involved in the rapid planning of the quarantine hotels program.

It remains unclear if any Labor government minister or Premier Daniel Andrews knew before the hotels began receiving returned travellers for their mandatory 14-day quarantine that private security would be used to guard the sites. 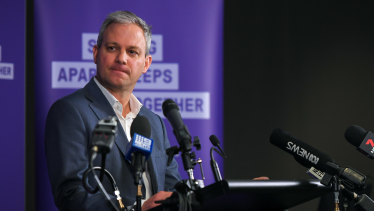 There are now 415 active cases of the virus in Victoria and there have been a cumulative 332 infections since the pandemic began which authorities believe have been acquired in the community.

Both Professor Sutton and Chief Commissioner Patton said on Thursday that they played no role in the snap decision in May to draft in three private security firms to guard the hotels housing the returned travellers.

Senior state bureaucrats were given little more than 24 hours to put a plan in place to begin receiving returned travellers after the national cabinet approved the policy on March 27, with flights carrying returnees due at Tullamarine from midnight the following day.

The government has confirmed it bypassed the usual tender process when it hired security outfits MSS, Unified and Wilson to deliver security arrangements within the hotel quarantine program, citing the urgency of the effort.

The hotel quarantine program has now been placed under the supervision of prison service Corrections Victoria, while retired judge Jennifer Coate begins her inquiry into the debacle with a reporting date set for September 24.

The terms of reference for the inquiry require Justice Coate and her staff to inquire into the actions of the government, its agencies, contractors and hotels.

Professor Sutton said on Thursday that he had had nothing to do with the decision to hire the private contractors.

"It [the decision] wasn't mine, I haven't been involved in the governance and operation," he said.

"But it was jointly oversighted by emergency management within the Department of Health and Human Services, Emergency Management Victoria and Department of Jobs Precinct and Regions.”

Mr Patton said he had not personally been involved in planning the quarantine effort but indicated that police had a role in the decision making.

Asked if police had refused to have officers stationed inside the hotels, he said he had had no discussions about the program.

“I certainly haven’t had any conversations in relation to the quarantine,” Mr Patton said.

“Decisions were being made with other organisations on what was the most appropriate way for quarantine to be looked after.”

Police Minister Lisa Neville, the only senior Labor government minister to talk to the media on Thursday, was reluctant to speak about the role of ministers in the decision to hire private security, saying the inquiry would look at all aspects of the affair.

The minister stressed the fast-paced environment facing the government’s departments and agencies when they put the quarantine system in place.

“There are a range of people that are involved in making decisions about how you implement a quarantine decision of that nature,” Ms Neville said.

“We did it in 24 hours, decisions were made by various agencies, and I’m not going to throw anybody under the bus, rightly or wrongly.

“Let’s see what the inquiry finds about those decisions.”

When asked why Victoria's quarantine was run differently to other states, Ms Neville said: "Every state runs their emergency management system in a very different way. In NSW it’s run by the police ... that is not the case in Victoria. In health emergencies, it’s health."

The secretaries of the departments of Jobs, Precincts and the Regions, Premier and Cabinet, Health and Human Services and the Emergency Services Commissioner either declined to comment on Thursday or did not respond to requests for comment.

Wilson Security said in a statement that it does not provide security services to the Rydges on Swanston or the Stamford Plaza , the two sites confirmed as part of the outbreaks.

The security firm said it used proper hygiene practices and protective equipment at the hotels where it was operating and that none of its workers had tested positive to the virus.

Latvian Stepanov is Wenger's worst transfer. Arsene did not understand that Bergkamp admired him for a joke – and signed
Berbatov – Bale: Gareth, I want to see you play football!
Arturo Vidal: Bayern are always the favourites, but Barcelona is the best team in the world
Kike Setien: Lewandowski is a great player, but he is not on the level of Messi
The great Milan of the noughties are already coaches: Gattuso is rebuilding Napoli, Shevchenko is going to the Euro, some are still at the club
The Premier League will not have a winter break in the 2020/21 season. Start-September 12, end-may 23
Liverpool have entered talks with Bayern over Tiago
Source https://www.theage.com.au/national/victoria/premier-s-team-takes-cover-over-hotel-quarantine-20200702-p558ip.html?ref=rss&utm_medium=rss&utm_source=rss_national