Victoria’s health department has been forced to release emails previously withheld from the hotel quarantine inquiry that reveal a bitter internal turf war about who should have been in charge of the program.

An April email exchange between Chief Health Officer Brett Sutton and Euan Wallace, who was then the chief executive of Safer Care Victoria and is now secretary of the Department of Health and Human Services, reveals the extent of the tension between the public health team and emergency management officials. 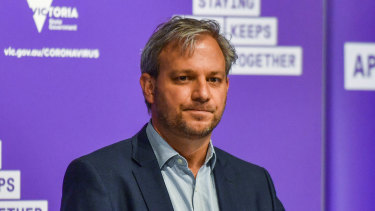 In the exchange, Professor Sutton describes the exclusion of him and his staff from the Operation Soteria quarantine program as “astounding” and leading to "moral and legal" unease.

Professor Sutton said in a second supplementary affidavit, which was part of a late Friday afternoon dump of new information from the inquiry, that he had forgotten about the April 13 email exchanges with Professor Wallace when he made his initial witness statement.

The emails were discovered during a recent forensic search of DHHS databases and released by the hotel quarantine inquiry, headed by retired judge Jennifer Coate.

The inquiry was established by Premier Daniel Andrews in July to give Victorians answers about how the second wave of COVID-19 got into the community, killing more than 800 people and plunging the state into a lockdown of more than 100 days.

The latest material produced to the inquiry sheds little to no light on why private security guards – who have been blamed for seeding the virus into the community and triggering the second wave – were preferred over police and ADF personnel for a crucial role in the state’s pandemic defences.

It does, however, put Victoria’s former top bureaucrat, Chris Eccles, at odds with former police chief Graham Ashton over the contents of a telephone conversation they had shortly after a critical March 27 national cabinet meeting where the decision to forcibly quarantine all returned travellers was taken.

Mr Andrews, in a new affidavit, reiterated he had no involvement in the decision to use private security and did not give Mr Eccles any instructions to that effect. 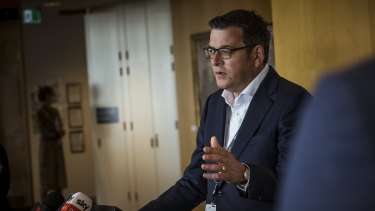 The newly revealed emails show Professor Wallace contacted Professor Sutton on April 13 to say he had heard about a “bit of tension” between the public health team and the emergency management area. Professor Wallace added that he had identified gaps in the health and wellbeing arrangements for hotel quarantine.

“I really wanted to get your view re: governance etc. I understand that the persons are detained under your order. Assuming this is correct, this brings with it a level of accountability/responsibility for the health and welfare of those detained,” Professor Wallace wrote.

“Is that a cause for concern to Annaliese [Van Diemen, the then deputy chief health officer], Finn [Romanes, deputy public health commander] etc? Is that the main pressure point or is there something else?”

In response, Professor Sutton emailed later that day: “I think the main point of tension is exactly that, Euan.

"Operation Soteria was – as an illustration – set up and put into place through EMV [Emergency Management Victoria] / State controller without even getting my approval or even input. Annaliese was similarly excluded. That, in and of itself, is astounding to us.

“It was seen as an almost wholly logistic exercise ... there is clearly a disconnect with our EM [Emergency Management] colleagues, perhaps especially in EMV who understood their role as controller of the scheme and effectively excluded those with significant accountability. That is a source of unease – moral and legal!”

None of these emails was provided to the inquiry by DHHS, and they were discovered only after The Age revealed last month that other crucial emails contradicting Professor Sutton’s initial testimony had also been withheld.

Professor Sutton conceded in one of two new affidavits that there was an “apparent inconsistency" in his original evidence to the inquiry.

In October, The Age revealed that a March 27 health department email chain seemed to suggest that Professor Sutton knew about the use of private security in hotel quarantine, which he had denied in his original evidence to the inquiry. That email had not originally been revealed to the inquiry.

In his most recent statement, Professor Sutton said that in late September and early October, lawyers from the health department and its law firm MinterEllison had raised the March 27 email with him and told him it mentioned private security.

However, he insisted in the statement released on Friday that the email chain did not contradict his original evidence.

“I told Ms Bedford [a MinterEllison partner] that I did not consider that I needed to change, clarify or explain my evidence,” he stated.

However, he said he had not given any instructions to the department’s lawyers on what documents to provide to the inquiry, as it was not his place.

Professor Sutton explained in his new affidavit that he had been extremely busy during this period and had only skimmed the March 27 email chain and did not take in its contents.

In relation to a second email on April 1, sent by Dr Romanes, which said Professor Sutton was on top of an unbreakable chain of command for hotel quarantine, the Chief Health Officer said he was aware of this email when he made his original statement to the inquiry and gave verbal evidence in September but had not addressed it because he felt it did not reflect the “actual position”.

He maintained that he viewed the Jobs Department and the emergency management area of the health department as having governance responsibility for hotel quarantine.

Justice Coate is due to hand down her final report no later than December 21.

Richard Baker is a multi-award winning investigative reporter for The Age.

Tammy Mills is the legal affairs reporter for The Age.

Chip Le Grand is The Age’s chief reporter. He writes about crime, sport and national affairs, with a particular focus on Melbourne.

The main veteran left Chelsea. For 9 years, Lucas Piazon played for the club three times!
Ronald Koeman: Suarez is a great player, but Barcelona made a decision. I don't like answering questions about him
Fonseca could be sacked if Roma fail to beat Spezia. Allegri and Mazzarri are contenders for the post
Mick McCarthy in charge of Cardiff until the end of the season
Aston Villa buy from Marcel Sanson for 14-15. 5 million pounds
Dzeko was removed from the Roma squad after a conflict with Fonseca. The striker was offered to West Ham
Ronald Koeman: We haven't scored 7 out of 12 penalties this season. This is too much, something has to change
Source https://www.smh.com.au/national/victoria/previously-withheld-hotel-quarantine-emails-show-sutton-s-turf-war-with-emergency-managers-20201127-p56iom.html?ref=rss&utm_medium=rss&utm_source=rss_national

Holiday at home in this Bridgewater stunner

‘We’re certainly busy’: behind the boom in overseas film and TV production

The Trump era is over, not with a bang but with an elegant troll

How safe is Anthony Albanese and how long does he have as leader?

Where are we going with Australia Day?

Meeting the work test while working in a family partnership

The truth about January 26

It’s getting hot in here, Australia: let’s cool it, as a matter of honour

What Donald Trump and I have in common. And it’s not hair colour

‘I can’t say how grateful I am’: Two halves whole again as DCE, Foran reunite

‘Families are making a choice’: Concern as preschool enrolments drop during pandemic

‘I understand that loss means so much’: How fatherhood changed Bondi Rescue lifeguard

‘A moment of unity’: Australia Day stirs debate despite COVID-19

The most UnAustralian Australians of the Year

'I wrapped myself in a damp towel': Sydneysiders risk health inside hot homes

Security, cleaning and safe food delivery: What it can take to be exempted from hotel quarantine

US under Biden to test Morrison government's do-little climate stance

The chequered past of Kate Ritchie’s young suitor

Revealed: The secret to skipping hotel quarantine and who is getting the exemptions

Inside tennis lockdown: a small price to pay for the freedom beyond

‘It’s exhausting’: Return to office will be wobbly, handle with care

One and free? Why First Nations people struggle with Australia Day

Democracy only works with the consent of the governed

New gun in town for Kings of the north

Scorchers push Stars to the brink of oblivion

The best way to borrow for an investment property

Ben Lawson: why I penned the poem To My Country

Smoke on the water: How Fraser Island is rising from the ashes

The first months were hard, then Nibal learnt the best thing about Australia

A gap year around Australia changed our family

How Bambi Northwood-Blyth perfected the art of dressing for work

The road ahead: where AFLW clubs stand

Recharged Barty ready to make up for lost time

We owe a duty to advance Australia fair

‘Sometimes I experience nothing, other times it’s rampant’: Sexual material warning on Roblox

Star’s warning after nightmare over

Freedman speedster could be Golden

Don’s gone but orange really is the new black

BRACE FOR IT: The last massive hurdle Aussie economy has to face