Construction on a billion-dollar coal mine in central Queensland is set to begin after mining leases were handed over by the Palaszczuk government on Tuesday.

The Olive Downs project has been given approval by state and federal governments to clear 5500 hectares of koala and glider habitat, about 343 times the size of Roma Street Parklands. 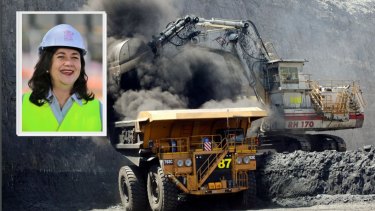 The Queensland government has given final approvals for a new coal mine in central Queensland.Credit:Facebook/Robert Rough

Premier Annastacia Palaszczuk granted the leases to private equity group Pembroke Resources, as part of its latest pitch to regional Queensland one month out from the state election.

"As Premier of Queensland I have been out in the regions, I have always backed the regions."

The metallurgical coal mine, 40 kilometres south-east of Moranbah, will be allowed to extract 15 million tonnes of coal each year, with most destined for Asia.

The mine will export hard-coking coal for steel production and is much less controversial than Adani's Carmichael mine in the neighbouring Galilee Basin, which will produce mostly thermal coal for power generation.

The federal government signed off on the mine in May, on the condition the mining company contributed $1 million "to improving long-term conservation of koalas and greater gliders in the Bowen Basin".

Other environmental conditions placed on the mine included a 34,000-hectare offset property to relocate wildlife and "a comprehensive monitoring and management program" to ensure the project did not affect groundwater-dependent ecosystems.

No objections were lodged by environmental groups during the month-long public consultation period in 2018, a spokesman for the Premier confirmed.

The owners also signed an agreement with traditional owners to provide employment opportunities.

Pembroke estimates the mine will generate $5.5 billion in royalties to the state government over the mine's life, or about $73.3 million a year.

"This coming from a Premier who has moved the goalposts on projects like Adani and New Hope ... trust me, no one is going to believe the Premier when it comes to the resources industry," she said.

The final approvals for Olive Downs comes as a crucial royalties deal with Adani languishes, 12 months after the deadline passed.

Ms Palaszczuk committed to finalising the deal on September 29, 2019, but no agreement has been reached between the government and the Indian mining giant.

Khabib on meeting with Ronaldo: I was wondering how he keeps this fire going for 17 years. Motivation, discipline, as I understand it
Asensio on Real Madrid: One of the best squads in the world. Atletico and Sevilla can become our competitors in La Liga
Manchester United issued a warning to Greenwood due to his discipline problems. He was not in the squad for two games in a row
Raheem sterling: we Need to fight insults on the Internet. Do people want to change something?
Mourinho on Europa League: it's not fair that you get clubs from the Champions League in the play-offs
In real Life, they thought about changing the coach. Candidates - Pochettino and Raul (As)
Khabib: I like Football more than MMA. There is no need to beat, break. Just by beauty you show what a professional you are
Source https://www.smh.com.au/politics/queensland/qld-approves-mine-that-will-create-1000-jobs-but-destroy-koala-habitat-20200929-p5606f.html?ref=rss&utm_medium=rss&utm_source=rss_feed

'I haven't had that feeling yet': Smith throws retirement curveball