Race-by-race guide and tips for Ballina on Tuesday

Track heavy 8/9 and rail true so expect or on near the pace early before late trend wider.

Consistent three-year-old Murwillumbah filly 2. Hollywood Dreaming from the Matt Dunn stable is at peak fitness after four runs, draws the inside, and gets conditions to suit after surging home to win her maiden at home last start in soft going.
Dangers: Watch the market around Gold Coast filly 3. Sukoshi who was only average third-up in a BM 62 at Ipswich, but best form is clearly on rain-affected going. Include Coffs Harbour four-year-old 5. Beat That first-up if you are playing the wider exotics.
How to play it: Hollywood Dreaming to win
Odds and Evens: Split 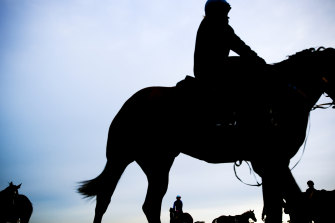 Tricky restricted sprint in these conditions. Grafton five-year-old gelding 6. Tobasco from the John Shelton stable nearly always improves sharply when he gets on to a wet track. Finished close-up in his last two at Taree in soft going against better opposition, and drawn to get a charmed run.
Dangers: Coffs Harbour mare 7. Secrets No More has a poor winning strike rate from 52 starts, but also relishes rain-affected going. Charged home from well back to win last start at Port Macquarie on a soft 7 rating. Murwillumbah filly 3. Devine Grey resumes for a leading stable, and did win her maiden fresh at home late last year. Will drift a fair way back, and trial was only fair when scouting wide from well off the speed. Keep four-year-old mare 2. Be Watchful safe resuming for local stable without a public trial.
How to play it: Tobasco to win
Odds and Evens: Split

Fingers crossed, but this can finally be the breakthrough race for Coffs Harbour five-year-old 1. Guest fourth-up from the Jim Jarvis yard at his 24th start. Perennial back-marker who flew home to just miss on a heavy 8 in a deeper maiden at Port Macquarie, and is well suited under the set weight conditions.
Dangers: Progressive Murwillumbah three-year-old 3. Hogan's Dare was heavily backed when just missing charging late at home second-up, and is ready to win, although the inside gate may not suit his natural pattern. Grafton four-year-old 2. Haven Road has run three consecutive close seconds, and prefers rain-affected ground. Drawn to roll forward and give another big sight on speed.
How to play it: Guest to win and box trifecta 1,2,3
Odds and Evens: Split

Thin and very tricky maiden, with plenty either on debut or resuming, so the market will have a big say, especially on those who have changed stables. Local three-year-old gelding 2. My Cousin James (One Lickety Split x Ancient City by Denon) debuts off a dominant soft track trial win, and appears well placed.
Dangers: Former Victorian filly 11. The Red One resumes for new Coffs Harbour yard, and showed enough in first prep to be competitive here. Include Gold Coast three-year-old 1. Cubic Zirconia who returns for his first run in nearly a year, and has trialled OK. Watch the betting on former Albury-based two-year-old filly 6. Angama who resumes for new Grafton stable without an official trial; and local filly 4. Colour Chart (Master Of Design x Colourist by Danzero) who debuts off a quiet trial.
How to play it: My Cousin James to win
Odds and Evens: Split

It doesn't get any easier here, with several chances, headed by former Bjorn Baker-trained three-year-old gelding 3. Dollareuro having his first run for the Edmonds stable at Bundall fresh for only his third start. Nice trial at the Gold Coast is a strong pointer.
Dangers: Murwillumbah filly 11. Allares showed good improvement second-up in a deeper maiden, although drawn off the track. Former Victorian having his first start for new Grafton stable, three-year-old gelding 2. Alkaamel would need to show a bit more, but bred to handle the ground. Watch the betting on US-bred Queensland four-year-old 1. Add Me Some (Ad Valorem x Alameda by Frisco View) who has had a stack of trials, winning the latest. Coffs Harbour mare 12. In For A Dollar like many needs to improve, but gets the blinkers on; while Grafton three-year-old 8. Quarter Charge can also improve sharply against this lot.
How to play it: Dollareuro to win and first four 2,3,11/1,2,3,8,11,12/1,2,3,8,11,12/1,2,3,8,11,12
Odds and Evens: Split

Keen on three-year-old Gold Coast filly 2. Take Tea from the Less Kelly yard fourth-up. Has been hitting the line well in better races over the border, and peaks here with a 2kg claim in ground she appreciates.
Dangers: Liked the way Gosford five-year-old 1. Balmaceda swept home into a place resuming off a break this grade at Grafton. Took on tougher company in autumn, and already a second-up winner. Warwick Farm five-year-old 3. Damit comes out of that same CL3 at Grafton when finishing OK third-up, but would need to find a length to trouble the top two; while include Murwillumbah three-year-old 4. In Waves who has been solid enough through the line in four runs this prep, prefers wet tracks, and is sneaking down in the weights.
How to play it: Take Tea to win and trifecta 1,2/1,2,3,4/1,2,3,4
Odds and Evens: Split

We close with a fairly even battle. Like progressive four-year-old Murwillumbah gelding 4. Stuck With You from the Dunn yard coming back from metro class fourth-up in his first prep. Already shown a clear liking for rain-affected ground, and draws to park off the speed and finish over the top.
Dangers: Lismore three-year-old filly 3. Amirykal is also well placed third-up, despite a sharp rise in weight. Scored an impressive CL2 win resuming in the heavy at Grafton before brave in a much tougher highway finishing only 2.6 lengths from the smart Rothenburg. Gold Coast four-year-old 1. San Pierre will find this easier than his last couple, and can peak third-up; while Gold Coast three-year-old 5. Epplause is best of the rest coming off a dominant all-the-way maiden win in soft ground at Casino.
How to play it: Stuck With You to win and quinella 3 and 4
Odds and Evens: Split

Lewandowski on Chelsea: They are playing very well, but we are Bayern
Juventus wanted to sign defender Akieme, but Barcelona refused
Lazio has agreed with Mayoral and will offer real 15 million euros
In Romania, a special champion: everything was decided in the match, the format of which was chosen 3 hours before the whistle
Danny rose: I was stopped by the police last week: is This a stolen car? Where did you get it?. And this happens regularly
Barcelona refused to sell for 60 million euros Trinca u, bought from Braga for 31 million. The club count on him
Chelsea will compete with Everton for Regilon. Real Madrid is ready to sell him
Source https://www.theage.com.au/sport/racing/race-by-race-guide-and-tips-for-ballina-on-tuesday-20200713-p55bkl.html?ref=rss&utm_medium=rss&utm_source=rss_feed