Asian markets look set for a cautious start Friday after US shares edged toward an all-time high and Treasuries climbed as traders digested some mixed economic data and the latest spate of earnings.

Japan is closed for a holiday. The S&P 500’s biggest three-day advance since April took the gauge closer to a new peak. 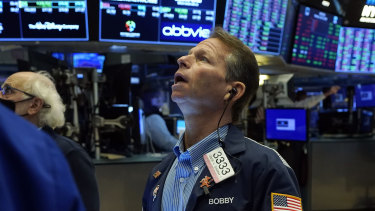 Longer-term Treasuries snapped a two-day decline and strong demand for an auction of 10-year inflation-protected securities produced a record-low yield.

The dollar was little changed and the euro lagged its Group-of-10 peers on the European Central Bank’s plan to maintain its ultra-loose monetary policy as long as needed.

Global stocks are on course for a modest weekly gain, bolstered by generally robust corporate earnings and stimulus support. At the same time, 10-year US Treasury yields are set to decline for a fourth week, which for some may signal concerns that economic growth could be peaking in part as the delta coronavirus strain forces mobility curbs in some countries.

The latest US economic reports were mixed, showing sales of previously owned homes rose for the first time in five months, while jobless claims unexpectedly climbed.

“There’s going to be some choppiness in the market in the second half of the year, but we think it’s going to trend higher,” said Victoria Fernandez, chief market strategist at Crossmark Global Investments.

“We have so much liquidity in the market right now, you have companies with a tremendous amount of cash on their balance sheets, you have rates at tremendous lows.”

Elsewhere, oil rose to the highest in a week amid expectations of tightening supplies as demand recovers. Bitcoin held above $US32,000.

‘We’re being treated as mugs’ by Gladys Berejiklian and her ministers: Alan Jones

Typhoon Tuesday: After COVID and heat, Tokyo braces for wind and rain

Land buyers made to play games to get blocks

Victoria’s new life out of lockdown

Bitcoin surges on the backs of billionaires

ASX set for gains as Wall Street holds near records

‘Forum can help’: Company at centre of $400m Westpac fraud open for business

Lack of leadership creates a toehold for lockdown fury

Just take the mental health day. Here’s why more of us are

One year on, MPs still can’t agree on laws to stop jailing 10-year-olds

A sore point in the ranks: Inside Labor’s tax cut decision

US maintains entry restrictions due to rising Delta cases

SYDNEY’S MOMENT OF TRUTH: Why this week could be turning point

Fans cheering against their own team

At Least Eight Dead After 22-Vehicle Collision in Utah

Fed up? Take a walk on the mild side

Send the marching sookies off to scrub hospital floors

The push to open schools exposes teachers to risk

Turnbull turns up on own influence register

Cannon-Brookes backed Spaceship hits $1b in funds under management

Your Daily Horoscope for Tuesday, July 27

A ‘traffic lights’ system for NSW’s COVID restrictions would be ‘gold standard’: Murray

Nicolson wins through to quarter-finals as draw opens up

Clashes in Tunisia after president ousts PM amid Covid protests

‘Political wing’ of the LNP ‘have completely lost their way’