The Australian film and television reforms announced this week by minister Paul Fletcher were much needed and long overdue. They are loaded with good intentions, too – most notably to foster "higher production values and programs with a better prospect of being sold into the global content market". But there's a very real chance they will fail.

The big winners of the reforms are the commercial TV broadcasters, which have had their obligations to commission Australian drama, kids content and documentaries simplified (a good thing) and reduced (good for them, not so good for those who think Australian voices, stories and talent in these areas matter). 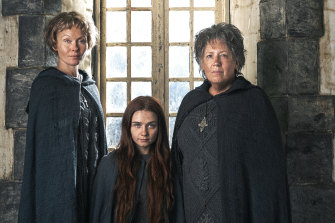 The changes are designed to encourage more high-end production like Lambs of God, but they could have the opposite effect.Credit:Foxtel

The streamers – Netflix, Stan, Amazon, Apple TV+, Disney+ – have escaped regulation, being asked merely to report their spending on Australian content. The veiled threat is that if they don't commission willingly, they will be forced to do so by regulation.

It's an enormous leap of faith in more ways than one.

"In the contemporary screen-production environment, commissioners of content worldwide are looking for well-developed and well-written creative concepts," the government noted.

It appears to believe its reforms will lead to more polished scripts, higher budgets, better production values and screen stories able to mix it with the best Netflix has to offer. But we may already have seen "peak Netflix" as it ramped up local spending in anticipation of regulation, as did Amazon, Apple+ and Stan. With that threat removed, who knows?

On broadcast TV, it's a numbers game, and the numbers don't add up.

Under the new system, each of the three networks must acquit 250 points of Australian drama, kids' and documentary content per year. They can spend those points where they like (but documentary is capped at 50 points).

The intention is to reward bigger spending. But the reality is most short-run drama on Australian TV – Doctor, Doctor, say, or The Secrets She Keeps – already costs close to that upper figure. You're certainly not getting The Crown for that price. In fact, you wouldn't even get Lambs of God, at around $2.5 million for each of its four hours – which would, incidentally, be just about enough to do Foxtel for the year under the new rules. 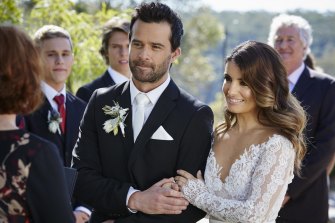 Long-running soapies will now count for far more, meaning Seven can acquit most of its drama obligations through Home and Away (pictured).Credit:Channel Seven

Do broadcasters actually run such calculations? You bet they do. One producer told me this week he has seen precisely this sort of analysis run by a network.

In fact, Seven and Ten will acquit most of their obligations through their long-running soapies because the new points system has increased their value.

Seven makes 115 hours of Home and Away. Under the old arrangements, that was worth 115 points of the required 250, leaving a lot of room for higher-end productions. Those obligations gave us Packed to the Rafters, A Place to Call Home, 800 Words and a whole lot more.

Under the new arrangements, Home and Away is worth 172.5 points. Seven could acquit the rest of its obligation with 50 hours of New Zealand ob-docs such as Motorway Patrol, plus a single 2 x 2-hour drama miniseries such as a Molly. That's it. Done and dusted.

Ten's 130 hours a year of Neighbours is now worth 195 points. A two-hour telemovie (10 points), a season of Bondi Rescue (10 points) and one cheapish kids drama series and they're done.

Without a soapie to lean on, Nine has to work harder (as has long been the case). Still, it could get there with as little as 40 hours of drama budgeted at $1 million-$1.4 million an hour. That's less than half the hours (84) they have averaged over the past decade.

Nine also has the benefit of a streaming partner in its ownership of Stan, which has built a strong and growing brand position as the home of Australian originals. But because a program screened on Stan counts as first-release on Nine if it is aired within two years, it's likely we'll see double-dipping; Stan gets to report its spend, Nine gets the points.

There's no question streaming has changed the way we consume drama and has wreaked havoc on the business models of commercial broadcasters, and something had to change. And there truly are opportunities in the global markets opened up by streaming for makers of high-quality Australian content. But the measures introduced this week are a first step only, with much fine-tuning required.

Let's hope that happens. Let's hope the streamers really do step up to the plate and that five years from now, we don't look back on these good intentions and realise they did nothing but pave the road to hell for Australian stories on screen.

Josep Bartomeu: I had no intention of resigning. Barca will have trophies this season
Zinedine Zidane: Hazard is ready. We are happy, this is good news
Zidane on ISCO's words: it's ambition. Everyone wants to play
Bartomeu about VAR: In the match against Real Madrid, a non-existent penalty was awarded. We need fair football
Ian Wright: it's a Pity Ozil isn't playing, but Arteta's tenacity is admired
Josep Bartomeu: it was Important to start a new era for Barca with Messi. The Interests of the club are above all
Spider-man is a Barcelona fan. Tom Holland photographed in a Catalan t-shirt
Source https://www.smh.com.au/culture/tv-and-radio/let-s-hope-good-intentions-in-film-tv-reforms-don-t-pave-way-to-hell-20201001-p5610w.html?ref=rss&utm_medium=rss&utm_source=rss_culture

'I found my breast cancer getting a fake tan': A young Scarborough woman's story of survival

Coronavirus updates LIVE: Victoria records zero cases for second day in a row and first time since March; Melbourne lockdown restrictions to be lifted as Australian death toll stands at 905

Ask a Reporter: Is the LNP running dead in McConnel?

'It's the beautiful flight': Frisbee golf sales boom during pandemic

Another donut day: Victoria records no new cases of coronavirus, no deaths

Another doughnut day: Victoria records no new cases of coronavirus, no deaths

IN PHOTOS: ‘Miracle’ escape as car crashes into trees