Premiership coach Paul Roos says players have become guilty of "unnecessary" and "stupid" taunting and has backed umpires to keep penalising those who shove an opponent.

Demon Jake Melksham had taken a mark against Adelaide's Fischer McAsey on the stroke of quarter-time at the Adelaide Oval on Wednesday night only to have the shot at goal denied when a free kick was paid against Aaron vandenBerg when the Demon attempted to add to McAsey's misery by pushing him in the back. 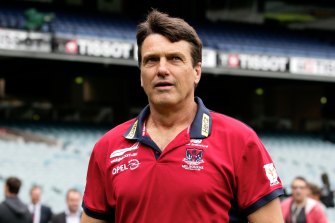 The free kick prompted Eddie McGuire, calling the match on Fox Footy, to claim the league's footy boss Steven Hocking was waging an "absolute war on this type of play". League sources said the issue has been broached among the AFL's competition committee but there has been no specific policy formulated at this stage.

What appears clear is that officials and umpires have grown tired of the taunting. Richmond's Tom Lynch avoided a free kick for shoving Alex Witherden in the back of the head on Tuesday night but was cited for misconduct by the match review officer and fined $500, while North Melbourne's Jasper Pittard cost his team a shot at goal against Carlton in round eight when he pushed Marc Murphy to the ground.

Roos, the former Swans premiership coach who later helped rebuild the Demons, endorsed Dermott Brereton's claim that this type of taunting rarely happened during their illustrious playing careers through the 1980s and 1990s.

"To me, and listening to Dermott, I played in that same era and I don't ever remember anyone taunting me after I got a goal kicked on me, gave away a free kick. It just didn't happen," Roos said on Thursday.

"There was stuff in the game that shouldn't have been in the game, don't get me wrong. Blokes got elbowed in the head and punched in the back of the head – but that [taunting] sort of stuff was just seen as a no-go zone. How it has crept in, I am not sure. But I would be disappointed if I was a coach and my players were acting like that.

"Players have got to be aware they are being watched by young kids that are playing the game as well.

"I am all for stamping it out. The number of times I did a game last year or the year before [as a radio and television expert commentator] and before the bounce, or just after, blokes were bumping into each other 20 times or whatever, and then we give a free kick for a little hold in the ruck contest when a bloke has been bumped 15 times off the ball.

"Philosophically, I think we have to stamp it out. It's just unnecessary, stupid, dumb – it's just dumb."

Brereton, the former Hawthorn superstar, and former St Kilda captain Nick Riewoldt have been vocal in calling upon players to show more respect for each other.

Commenting on Fox Footy after the Lynch incident, Riewoldt said: "I think it's got to be down to the players as a fraternity to come together and get rid of that stuff that's crept in.

The AFL Players Association has not addressed the issue in a tumultuous season where there have been more important matters to address but it is represented on the competition committee by Brett Murphy, its general manager of player relations, and players Patrick Dangerfield, the AFLPA president, and Giants skipper Stephen Coniglio.

"I would like to think Steven Hocking has sent something out to the coaches and said: 'Look, we are going to continue to clamp down on this. It's just not a good look for the game'. Can you get your players not to do it,'" Roos said.

Koeman Pro 3:0 with Celta: Proud of the team. The results show that we are on the right track
Milan extended their unbeaten streak to 18 games by beating Rio Ave on penalties in the Europa League qualifier
Arteta on Manchester City in the League Cup: Arsenal are not very lucky with the draw. This is another test
Klopp about losing to Arsenal and Liverpool in the country of dreams, you have to score. Last pass failed
Muller held the UEFA ceremony in the stable. There had Neuer, Kimmich and Evangeliski
Liverpool 4 seasons in a row, cannot get past the 5th round of the League Cup and 2012 wins the tournament
Leno - first Arsenal goalkeeper in 8 years not to miss at Anfield
Source https://www.theage.com.au/sport/afl/roos-backs-absolute-war-on-player-taunting-20200806-p55j3y.html?ref=rss&utm_medium=rss&utm_source=rss_feed