Superstar recruit Sonny Bill Williams will miss the Sydney Roosters’ qualifying final against Penrith on Friday night because of injury.

The Roosters say the dual international has been ruled out after the flare-up of a neck injury. Nat Butcher takes Williams’ place on the interchange bench.

Roosters coach Trent Robinson knows finals experience will count for nothing if his premiers do not ‘‘lay it on the line and go out and play the style of footy we want to play’’ against Penrith.

The Chooks' supercoach knows there will be no repeat of that scoreline when they hit the M4 on Friday night to try and stop the high-flying Panthers.

"Every one of them rang me over the weekend to discuss it, which is very rare in our game,'' Robinson said on Thursday.

"People want to avoid it - but they all wanted to discuss it, get their lessons and move forward.

"These guys don't run away from anything or dismiss it without trying to improve - it was a lesson that had been sent our way.

"The belief is high going into Friday.'' 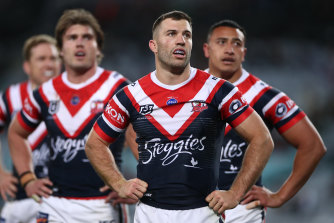 Coach Trent Robinson says every one of his Roosters players called him after the Souths shellacking last week.Credit:Getty

If Penrith have plenty of youthful enthusiasm, the Roosters have a mountain of big-game experience, including skipper Boyd Cordner, James Tedesco and Sonny Bill Williams who have spent years on the biggest stage.

"We've had guys plays lots of finals series, but tomorrow night we need to lay it on the line and go out and play the style of footy we want to play, not rely on anything in the past,'' Robinson said.

Freddy Lussick has been named to start in the No. 9 for the concussed Jake Friend, but Robinson stopped short of declaring the blond rookie would start the game at dummy-half.

Robinson also preferred not to rap Penrith superstar No. 7 Nathan Cleary and was happy for the commentators to do so. The coach had been impressed with the development of his own halfback and five-eighth - Kyle Flanagan and Luke Keary - who only had their first game together at Panthers Stadium in round one.

"Our job is to defensively work over the opposition to nullify their strengths. We'll do that," Robinson said.

"The commentary on individuals [like Cleary] is up to you guys [the media].

"I feel like [Flanagan and Keary] have developed really well.

"It's been an extended season with a pause and that development and relationship has continued to grow.

"They talk often, even away from field there's a lot of discussions at all times about the way they want to play. That adds depth to their relationship on and off the field.

"It's a long way from round one to semi-final one, but there's been a lot of development, which has been good.''

Hans-Dieter flick: I Hope Alaba will sign a contract with Bayern. Our club is one of the best in the world
Diego Maradona: Messi gave Barca everything, brought them to the top. He was not treated the way he deserved
Federico Chiesa: I hope to leave my mark in Juve. We will achieve great results
The Coach Of Benfica: I don't want us to look like the current Barcelona, it has nothing
Guardiola on returning to Barca: I'm happy at Manchester City. I hope to stay here
Fabinho will not play with West ham due to injury
Ronald Koeman: Maradona was the best in his time. Now the best Messi
Source https://www.theage.com.au/sport/nrl/roosters-lose-sbw-for-finals-showdown-with-minor-premiers-penrith-20201001-p560xy.html?ref=rss&utm_medium=rss&utm_source=rss_feed

Stunning deal to bring the Rugby World Cup to Australia

From anthems to boomerangs, Rennie is all in with Wallabies

Bellamy is still barking – but you can't say it doesn't work