The trick to winning premierships, which no doubt also applies to defending them, is timing your run.

After losing five of their past seven games, it was time for the Roosters to commence theirs. On a beautiful winter’s day at the Sydney Cricket Ground, Trent Robinson’s men appeared to do just that.

What had for an hour been a contest quickly became a cakewalk. The tri-colours blew Newcastle off the park with six unanswered tries in just 24 minutes, leaving the Knights teetering precariously on the edge of the top eight.

Not for the first time this year, the premiers did it without Jake Friend. The Roosters hooker, returning from an injured bicep on Anzac Day, lasted just 10 minutes. Once again, he shuffled off the SCG in a world of pain. The initial diagnosis was an arm injury not related to the one that kept him off the park for 10 weeks. It was a dampener on an otherwise productive day at the office.

All of the Roosters’ big guns fired. Latrell Mitchell scored a runaway try and booted eight goals from as many attempts. James Tedesco was a constant menace and the halves found space aplenty behind a pack that asserted its dominance in the second half.

Luke Keary, at various times, has fielded interest from rugby union, a stack of NRL clubs and both the NSW and Queensland State of Origin sides. It appears those sneaky Maroons had renewed their bid to poach him. 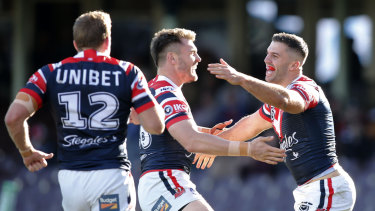 The Roosters overwhelmed Newcastle after a tight opening to the match.Credit:AAP

When we called him during the week to clarify his state allegiances, the premiership-winning half was blunt.

You can’t blame the Queenslanders for trying.

With Origin behind us, this was the first opportunity to look at both teams at full strength. The Chooks came into this one on the same number of competition points as at the corresponding time last year, while it its hard to know what to make of the Knights after long losing and winning streaks.

The early pace took its toll on the visitors. Neither team made an error until quarter time, when an attempted Boyd Cordner cut-out pass found former teammate Shaun Kenny-Dowall. It sparked a slew of errors, breaks and half chances, many of them butchered by Newcastle.

This may have been a very different game if Jesse Ramien didn’t drop the Steeden with no one between him and the tryline after a Kalyn Ponga pass. Connor Watson came closer still to glory, but bobbled the football in attempting to ground it. Those misses proved costly.

Once again, Tedesco marked up on Ponga. Whether it’s at Origin or club level, it’s a clash you can’t witness often enough. Tedesco scored the opening try of the game, one of the best of the season. It started off with a Siosiua Taukeiaho offload and went through five additional sets of hands before finding the Wally Lewis medallist.

Ponga was involved in Newcastle’s few bright moments. The Maroons star created just enough space down the left edge for Tautau Moga to score his side’s first. He also threw the last pass to send Herman Ese’ese crashing over.

Both fullbacks made several half or full breaks, displaying all their skills to underscore their status as the most exciting talents in the NRL. 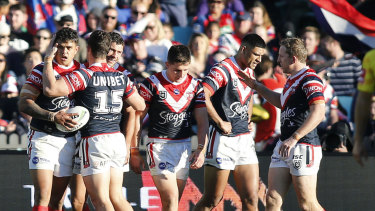 The Roosters had plenty to celebrate.Credit:AAP

When it comes to firepower, few can go with the Roosters when they are in the mood. All up they scored eight tries after flexing their muscles. They have given the Storm too much start to win yet another minor premiership, with their focus instead on the major prize.

If they get there, they may well look back on this as the moment when a storied run began.

Zinedine Zidane: Hames is an important player. I wish him a happy birthday
Atalanta controlled the ball for 8 minutes and 11 seconds before the first goal against Juventus
Jovic will be able to play with Villarreal if the third test for the virus is negative
Hodgson on Zaa threats: He did the right thing when he let people know. There is no excuse for this
Setien on Messi's rest: Of course, he needs it. But the score in the match against Valladolid was too slippery
Immobile – the fans of Lazio: Some people seem to have too short a memory. Leave my family alone
Holand was kicked out of a nightclub in Norway
Source https://www.smh.com.au/sport/nrl/roosters-romp-home-in-stunning-second-half-blitz-of-knights-20190720-p52931.html?ref=rss&utm_medium=rss&utm_source=rss_feed

Why are so many women reluctant to have their picture taken?

Get the egg nog, Christmas has come early - in Pascoe Vale, at least

Have we lost confidence in Daniel Andrews to get it right?

Yes, it's a weird season, but it seems the fans don't care

How you can be one of Australia’s top TV reviewers

This exception to the rule makes no sense

Tigers down Swans in second lowest-scoring game of AFL era

Rebecca felt hopeless before she joined a class action

WWII 'warbirds' get $1.1b Brisbane parallel runway off to flying start

'We are prisoners': Fenced exercise yards at lockdown tower slammed

Bob Peters' stars in Victoria ahead of spring assault

Sending it to Salem helps Dees turn woes around

'Natural reaction might be to hold back': Parents ponder extra year of kinder

Lin-Manuel Miranda and Disney: Timeline of a Collaboration

Aussie champion floored in first round

‘That was ridiculous’: UFC carnage panned

'An amazing young woman': Volunteer recognised after 18 years of work

Expats not asking for a free ride, we just want to come home

Patton out for a month with hamstring injury

McDonald sent to hospital but could still play next week

'Best of the season': Whales perform 'every trick in the book' off Sydney Harbour

'Change is as good as a holiday': Dons embracing hub life

Disembarking in a deeply divided America

'Almost certainly': Tudge all but guarantees pathway to citizenship for Hong Kong residents

‘A DANGEROUS TIME’: Victoria records another massive rise in cases

'We are definitely at a crossroads in NSW': State records five new cases