The bushfire royal commission has pressed NSW officials on why the incoming Resilience NSW boss, Shane Fitzsimmons, did not get a formal handover report about the summer bushfires when he started his new job.

Marg Prendergast, an executive director of Resilience NSW, said outgoing head Mick Willing "did a complete handover" to Commissioner Fitzsimmons prior to May 1. When asked if she could provide the royal commission with the document, Ms Prendergast said, "I'm not sure that it's in writing". 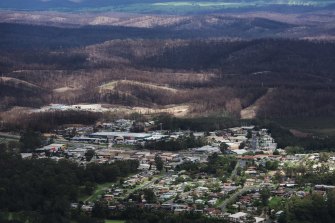 A long road to recovery: Part of the NSW South Coast that suffered from the 2019-20 bushfires.Credit:James Brickwood

Commissioner Mark Binskin asked Ms Prendergast why she couldn't provide the details from a separate report by her agency into last summer's lesson until it was finished.

"We're going round in circles," Commissioner Binskin said. "If it's a living process and you've already done some of that why can't that be provided to us?" 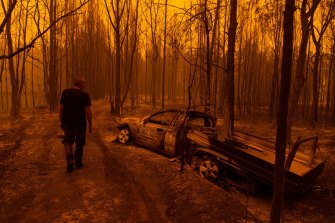 Getting help for recovery from the 2019-20 fires was initially bogged down by definitions, with only people directly affected by the fires able to tap funding support, the Royal Commission has heard.Credit:James Brickwood

Commissioner Fitzsimmons, who was head of the Rural Fire Service until he started his role on May 1, will likely be asked at length about the 2019-20 fire season when he fronts the Royal Commission into National Natural Disaster Arrangements for the first time on Wednesday – the 23rd day of public hearings.

During Monday's hearing, the Royal Commission heard Resilience NSW had been rebadged from the Office of Emergency Management. It was shifted from the Department of Communities and Justice to the Department of Premier and Cabinet, and staff numbers have grown from 60 last September to about 150 now.

Determining what lessons the agencies learnt from prior disasters was central to Monday's hearings, and will be a closely watched outcome from both the royal commission and the NSW bushfire inquiry, which is also underway.

The royal commission also examined how the process of calling in the Australian Defence Force (ADF), announced by the Morrison government on January 4, played out.

"NSW is not new to disasters. It has had disasters far less in size than that and has requested ADF support for recovery," Commissioner Binskin said, noting the military had already begun providing civilian support to eastern Australia from September 2019.

"I'm assuming one of the lessons here is to be able to provide information back down to the [local] councils on how they can request support, but I would have thought at your level you would have worked with them if they needed help to be able to draw that out and be able to put that forward?," he said.

"I'm not sure that that process was in place before 6 or 7 January [when the ADF began to be deployed]?

Ms Prendergast said emergency management committees were in place at council level "but I do take the point and we will actually stop [the process] and ensure that we educate more about what's available."

"Obviously there's different ADF capabilities," she said. "It took a little while to work out exactly what they can and can't do, because there's also the other element of not wanting to take away from local business and local contractors who can also do the work."

Dominique Hogan-Doran, the counsel assisting the royal commission, also highlighted the issue of who was eligible for recovery assistance, noting the "ongoing challenge" of defining which businesses were "affected by bushfires".

Ms Prendergast said initially only about 8 per cent of businesses in impacted regions could apply for the $50,000 grant because there were directly affected. That tally compared with about 88 per cent that suffered as tourists and others were turned away or told to leave creating "ghost towns obviously after the event".

"[T]he Commonwealth listened and they created a $10,000 grant for indirectly impacted businesses and we've now paid out more than $190 million to those businesses because they needed help desperately," she said.

Ole Gunnar Solskjaer: We will see a better Pogba in the coming seasons. He is approaching the peak
Lothar Matteus: Bayern need to make a lot of mistakes to lose to the current Barca
Pedro said goodbye to Chelsea: it Was an honor to play for the club and be a member of a big family
Tammy Abraham: Lewandowski is the best striker in the world
Dinamo Brest will play Astana, Celtic will play CR Reykjavik in the 1st round of Champions League qualification
Ronaldo can move to PSG. Mendes communicated with Leonardo (Foot Mercato)
De Ligt will miss 2-3 months due to shoulder surgery
Source https://www.smh.com.au/national/royal-commission-presses-officials-on-lack-of-briefings-insight-into-bushfires-20200713-p55bmw.html?ref=rss&utm_medium=rss&utm_source=rss_feed