Royal Sydney Golf Club will modify its controversial $17 million redevelopment to retain more than 100 of the 569 trees that were slated for the chop.

Royal Sydney's president Chris Chapman told members this weekend that the private club would modify its development application and delay construction until April 2022.

Former Woollahra Greens councillor and club neighbour Nicola Grieve said the changes were "a win for the community and a win for the environment".

"Make no mistake the club’s plan to chop down a forest is not going away, it will come back and we will be there when it does," said Ms Grieve who established a Save Our Trees Campaign on Facebook. 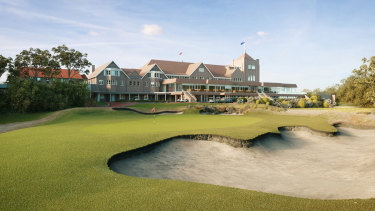 In a letter to members on Friday night, Mr Chapman wrote the club realised "our DA [development application] would be aided by the retention of many more trees and much deeper information on understorey cover, tree canopy cover and further ecological work."

He said the club had decided to retain a significant number of trees on the site in areas ‘non-invasive’ to the design (likely to number well over 100 trees). It would also consider some staged removal of trees.

It is understood the 100 or more trees to be retained will include large and significant melaleucas and Moreton Bay fig trees that provide large canopy cover.

Mr Chapman told members that council had given it a mammoth task. It had asked the club to detail every tree on site regardless of height, and engage an independent arborist to "peer review" the club's reports and identify how they could be improved.

Council's expert arborist’s view told the club that it had failed to "explore opportunities to reasonably minimise tree losses".

But there are no material changes to the plan by famous golf course architect Gil Hanse to create a more open heathland style course.

The 57-hectare 18 hole course at the elite Rose Bay club has slipped from one of the top 20 in NSW to the top 50 to 100. The club argues that narrowing playing corridors have impacted the quality of the playing surfaces. The course's greens, tees, bunkers, drainage and irrigation were also in decline.

Earlier this year, Mr Chapman wrote to members saying it was "reinstating the type of Indigenous environment that attracted our predecessors to choose this site on which to establish the club more than a century ago."

It includes plans to replace the existing turf, widen fairways and create more challenging holes. This includes planting another 700 trees, and increasing the diversity of the flora from 30 to 110 species of native shrubs, grasses and trees.

The club says it has planted a 1000 young trees and it has 80,000 plants growing at nurseries around NSW.

Mr Chapman also wrote to members earlier this year acknowledging many of the trees to be removed would be larger than those that would replace them.

The development application has been supported by leading golfers and organisations, including the adjoining Woollahra Golf Club.

"Get the trees away from the golf. What the critics don't understand, is that there is a limited role for trees in golf. Absolutely have them as part of the scenery, but get them off the stage. At Royal Sydney there are trees on the stage, and the wrong trees."

He also suggested there was some tall poppy or tree syndrome in play.

"The other unsaid part of the argument because it is the bluest of blue blood clubs in Australia, it makes Melbourne look like a public course, then there's [this attitude that they are] ... 'they are the Sydney toffs .. don't let them get away with it'," Mr Clayton said.

A spokesperson for Woollahra Council said the club's development applications was one of the largest it had received for many years, and involved significant issues and a thorough assessment.

Diego Maradona: Ronaldo and Messi are ahead of the rest. No one can do half of what they do
Bartomeu did not resign at a meeting of the Barca Board of Directors
Del Piero on the Juve-Barcelona match: Pirlo should play 4-2-4
Samuel Umtiti: The last two years have been the worst of my career. I ended up making a complete ass of
Putting together a dream team of the best players in history. Starting with goalkeepers!
Gian Piero Gasperini: Ajax has always been my reference point. Miranchuk is ready to play
Cuadrado on Juve: We have started the season slowly, but we have never lost
Source https://www.theage.com.au/national/nsw/royal-sydney-golf-club-boughs-to-pressure-to-retain-trees-on-the-block-20200920-p55xc3.html?ref=rss&utm_medium=rss&utm_source=rss_feed

Spooky coincidence gives All Saints' Eve ghost of a chance

'My best spot': After years of running away, O'Connor here to stay at No.10

Tatt's not all, folks: Addo-Carr to ink latest title ... then Sydney future

ASIC to be kept waiting for new commissioner after shock resignation

Victorians are owed a nation's gratitude

Your questions answered: Which COVID-19 restrictions are easing

Mosman swim instructor touched nine girls 'on or near their genitals', jury told

Public forgives the Premier for ICAC but she is on notice