The return of James O'Connor to Australian rugby says much about the code in 2019.

When Brad Thorn fronted a press conference to explain O'Connor's two-year contract with the Reds, he made it clear that the Wallabies and/or Rugby Australia had initiated the deal.

Can you imagine such a scenario even six short years ago? Head office contacting Ewen McKenzie at the Reds or Michael Cheika at NSW to tell them they had brought home a formerly disgraced player from Europe and asking if they could kindly fit him into their plans? 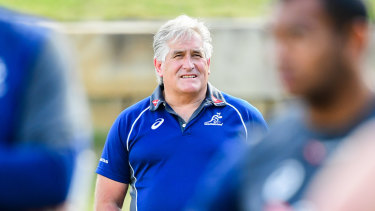 Australian director of rugby Scott Johnson is quickly putting his stamp on the sport.Credit:Rugby AU Media

Things have changed and quite dramatically so. Centralisation, corporation, coercion, call it what you want, but Australian rugby has a new king and he is Scott Johnson.

But it is not as if he has returned to the promised land. In fact, it is rugby's diminished status as a code that has created the need for an overlord.

The NRL and AFL now dominate rugby. It has been years since anyone has written the words "code wars" with rugby in mind, at least with a straight face.

Rugby's missteps have aided that, but it may also say something about Australia as a nation. It is self-confident.

Where New Zealand constantly wonders what the world thinks about it and delights in the All Blacks and Black Caps "punching above their weight on the world stage", Australia has its own flourishing domestic competitions, its own heroes. It doesn't need that same level of vindication. A comparison with America is not entirely baseless.

For example, if the Wallabies were to beat the Springboks in South Africa overnight it would be a bigger sporting achievement than NSW beating Queensland in an Origin match, or Collingwood beating Essendon, by any measure.

But the figures don't lie. Australians have chosen. They are in love with codes that always produce an Australian winner and the international-facing rugby, which cannot provide such a guarantee, has to accept that.

So, it is a smaller code now – even call it niche if you will – but that is not necessarily a bad thing.

It is no bad thing to be smaller, but with real purpose. The talent pool is still there. The Junior Wallabies proved that this year, reaching the final of the under-20s world championships.

Rugby's status also proves why Johnson is a perfect fit. He has spent years working in Scotland, where rugby is by far the smaller code.

In fact, in rugby terms, Australia is now more like Ireland than New Zealand. That will insult some still living in the last millennium, but the bookies do not expect the Wallabies to reach the Rugby World Cup semi-finals in Japan later this year. That is the reality. 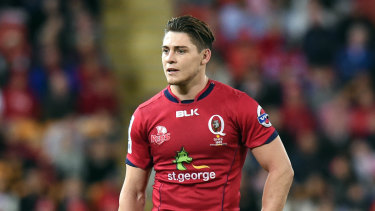 James O'Connor during a stint with the Reds in 2015. Credit:AAP

Accordingly, they must be nimble, aggressive and clever: and it must have someone in charge.

That is is exactly the sort of organisation we have seen in recent months.

Johnson has been everywhere: involved in selections, recruitment, retention, as he was in Scotland.

He is carrying on a philosophy that was already in place.

To give Cheika credit, he has laid the framework for this; in fact, I am convinced it will be his legacy. He has devoted a lot of energy to making sure Australian rugby is set up to deliver sustainable success whether he is there or not.

He may have flaws, but he cares. His approach to Kalyn Ponga showed that, even if I think rugby would be mad to pay overs for a league back with defensive issues who has previously stated a desire to play for the All Blacks.

So, is this a good news story or a bad one? A celebration that Australian rugby is trying to pull in the same direction or a lament that it has fallen on hard times?

It's probably more of the former. Call me an optimist, but good times can still be ahead of the Wallabies, even if this Rugby World Cup is a tournament too soon.

But success starts with an understanding of what state you are in. And Johnson's role indicates that Rugby Australia knows that.

In Romania, the 19-year-old goalkeeper hit two penalties, but both times the referee asked to Interrupt. The Keeper threw a fit and left
Solskjaer on De Gea: He won the Premier League, the FA Cup, the Europa League, the League Cup, but it's not enough
Vidal scored 8 goals with 23 shots on target. He has the highest percentage in La Liga
Jorge Valdano: Barcelona is not a title contender now. Messi can't do everything
Joaquin on the 550th game in La Liga: Proud to be caught up with the legend Raul
Bartomeu on Neymar: I don't think PSG will put anyone on the market
Кад Cadiz returned to La Liga after 14 years
Source https://www.theage.com.au/sport/rugby-union/rugby-s-new-overlord-perfect-choice-to-guide-niche-australian-code-20190720-p5291w.html?ref=rss&utm_medium=rss&utm_source=rss_feed

Real Footy podcast: 'I think they're in no man's land'

Companies warned to brace for toughest reporting season in decades

'It's been tough': Houli reveals his mother is in ICU with coronavirus

Wagga, Ballina tips: Wet your lips for this one

SYDNEY AT ITS KNEES: How virus is spreading all over NSW capital

Closing Queensland's borders, nightclubs again 'not out of the question'

Repeating the poem of forgotten love

Patton: I couldn’t control my emotions

'Unnecessary and unwarranted': Longmire hits back at Hardwick as Heeney ruled out for season

Group's sole purpose is keeping one step ahead of virus blues

'It's a sickness': Obsessed Tszyu on why he will beat Horn

Reds on a learning curve

Cats to face Freo on Monday night in round eight, Pies v Eagles on Sunday

Work stopped at Goldfields mine after worker suffers 'serious' fall

Self isolation for 57 officers after two Frankston police test positive

Clarko might not have energy for Hawks rebuild: Lewis

Hawks not ready for rebuild, Clarko is the man for us: Kennett