The Carlton Rydges Hotel at the centre of the latest devastating community coronavirus outbreak in Victoria has been put up for sale with a $40 million plus price tag.

The 107-room hotel at 701 Swanston Street is currently used as a quarantine zone for returning travellers and was at the centre of a COVID-19 outbreak in May that helped seed Victoria's latest spike in infections, prompting this week's harsh new lockdown across metropolitan Melbourne. 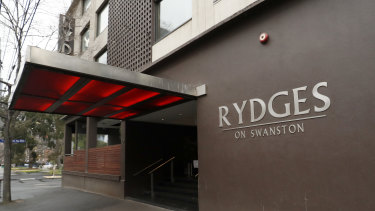 Lax hygiene has been blamed for infections among security staff and their contactsCredit:Getty Images

At least 19 guards, their families and other contacts tested positive after failures in infection controls in the Rydges cluster.

Another hotel outbreak among security guards employed at the Stamford Plaza in Melbourne's CBD infected more than 35 people.

The Rydges Hotel, next to Lincoln Square and just down the street from Melbourne University's sprawling Parkville campus, is seen as a major development opportunity and will be sold with vacant possession.

Property records show the site is owned by Adelaide-based hotel investor David Horbelt whose suite of assets includes the Rydges South Park Adelaide and the upmarket The Reef House at Palm Cove near Cairns.

The sale process is complicated by the hotel's quarantine status which precludes potential purchasers entering and inspecting the property.

"People can't get in to look at it," said Jones Real Estate's Paul Jones, who is managing the listing in conjunction with Colliers International.

Mr Jones said the lack of access to the property will be overcome by a plentiful supply of photos and internal plans to show prospective purchasers.

The property's recent quarantine history will have little impact on its development status or interest from investors, he said.

The Rydges Hotel is managed by ASX-listed Event Hospitality & Entertainment – whose other brands include Atura and Thredbo Alpine Resort – but under the terms of the quarantine arrangement it was taken over by the state government on a rolling 30-day contract.

The sale by vacant possession means the new owner will be unencumbered by a hotel management agreement. The hotel has potential to produce income of $3 million a year.

The property was on the market less than a year ago but didn't sell despite attracting offers above $50 million.

"It was in the final stages before we paused and didn't proceed with accepting one of the offers," Mr Jones said.

Melbourne University has been an active purchase of land holdings in the area. Late last year it swooped on two office buildings at 165 Bouverie Street and 155 Pelham Street belonging to the Red Cross in a $46 million deal.

Another 1600 square metre development site at 558 Swanston Street sold a year ago for $31.5 million to student accommodation provider Scape.

Spartak is going to withdraw from the RPL because of the refereeing – your reaction?
There are 2 cases of coronavirus in Atletico. The match with Leipzig – August 13
Renzo Ulivieri: Pirlo is one of the most profound thinkers of world football. He knows more than most coaches
Pirlo wants to sign Tonali at Juve. Alternative – Locatelli
Before the match with Real Madrid, sterling watched a video of the defeat by Tottenham in the 2018/19 Champions League
Andrea Pirlo: I am Flattered to have received such respect and trust from Juventus
Former Manchester United midfielder angel Gomez has moved to Lille. He will spend the season on loan in Boavista
Source https://www.theage.com.au/business/companies/rydges-hotel-at-centre-of-covid-19-spike-for-sale-20200709-p55ak7.html?ref=rss&utm_medium=rss&utm_source=rss_business