The popular Manly Seabirds have had their wings clipped, forced 13km up the road from Lottoland to show their appreciation for the Sea Eagles inside an RSL.

As the St George Illawarra Dragons cheer squad performed on a specially built stage at WIN Stadium on Thursday night, safety and security protocols have denied the Sea Eagles' own group from sitting 1.5m apart from each other on the sidelines at Brookvale Oval for Friday night's Manly-Warriors clash. 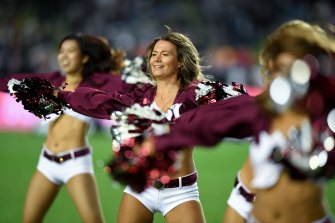 Cronulla's Mermaids have continued to perform since crowds were allowed back into stadiums, albeit high up on the hill at their makeshift Kogarah home ground, as have Newcastle's squad.

But Canterbury have abandoned their cheerleaders as part of a cost-saving measure during COVID, while Parramatta, who have the biggest game-day squad of 30, have also been missing, but will appear virtually on the Bankwest Stadium big-screen at half-time for the Eels' next home game.

Manly's cheerleaders have become synonymous with Brookvale Oval, but the tight layout of the suburban ground means they have had nowhere to perform.

Under NRL COVID rules, the entire playing area inside the stadium fence is the ''clean zone'' and only accessible to players, coaching staff and media. Lottoland has limited free space on the northern hill for the Seabirds to perform.

"We've still been performing on game days, but for Monkey Bun, which is a bar inside Pittwater RSL and an official game-day sponsor of Manly,'' Seabirds director of choreography Monique Carroll said.

"Obviously we'd love to be at the ground. Patience is a virtue. The reason we're not at the ground is I think the club are looking out for our health and safety.

"We're still performing for the patrons at Pittwater RSL, including our half-time routine. We're just forced to do it indoors at the moment. Hopefully we're back there soon.

"I do think it's fantastic to see other squads back at their game days.''

Manly CEO Stephen Humphreys said the Sea Eagles had supported the Seabird for more than 25 years, but COVID safety protocols had not allowed them to perform on game day.

"We are, however, planning a special performance by the best cheerleaders in the NRL at our big round-17 match at Lottoland against the Wests Tigers, which will be an exclusive members' appreciation event,'' Humphries said.

West ham offered 23+10 million pounds for defender fofan. Saint-Etienne refused
Andy Cole on £ 109m for Sancho: it's crazy money. Manchester United will not spend them at random
Juventus loaned Luca Pellegrini to Genoa
Palace, Brighton and Sheffield want to buy Brewster. Liverpool ask for 25 million pounds
Milan have offered 4 million euros for the striker Bodo-Glimt Gauge. He scored them in the Europa League
Atletico showed a photo of Suarez in three sets of uniforms
Lemar is Interesting to Leipzig
Source https://www.theage.com.au/sport/nrl/seabirds-have-wings-clipped-as-rival-squads-continue-to-perform-20200806-p55j9w.html?ref=rss&utm_medium=rss&utm_source=rss_feed