Seize this opportunity to repair our ailing health system

Victoria’s hospitals were already showing cracks before the COVID pandemic, but they are now straining under unprecedented demand as they struggle to retain burnt-out staff and recruit adequately trained replacements.

While alarmist claims about the state of our health system are nothing new, the evidence that has emerged in recent months is troubling. How long would you expect to wait for a bed in emergency? An hour or two? Try nine or 10 at the Royal Melbourne, according to emergency department director Mark Putland, who told The Age even a 20-hour wait is not unheard of. There have been reports of seriously ill patients arriving by ambulance being left on a stretcher to wait for a bed, Aisha Dow wrote in May, and thousands of triple-zero calls have not been answered in time. 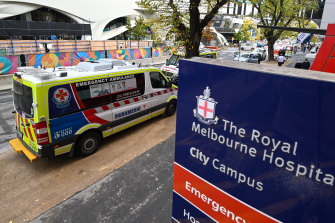 Some patients have waited up to 20 hours in the emergency department, according to Royal Melbourne Hospital’s Mark Putland.Credit:Joe Armao

As our hospitals become more crowded on the inside, the queue builds up outside. Victoria’s elective surgery waiting list is approaching 90,000, and there is a flood of patients whose care has been delayed.

Professor John Wilson, the outgoing president of the Royal Australasian College of Physicians, left The Alfred hospital last month after 30 years of service, declaring he could not “keep working in a system where we are not able to deliver top-quality care with limited resources when staff are being burnt out to the point of beyond exhaustion”.

It’s little better in NSW, where a similar surge in triple-zero calls has prompted NSW Ambulance to consider taking non-urgent cases to GPs and chemists, while doctors have reportedly been treating some patients in hospital corridors.

The crisis can only get worse as flu strikes in earnest after a two-year reprieve. Warns Mya Cubitt, Victorian faculty chair of the Australasian College for Emergency Medicine: “If we go into the winter without people being honest about the state of our emergency departments we will continue to see an exodus of staff and more and more emergency departments will start to fall over.”

And let’s not forget COVID-19, which has not magically disappeared even though Victoria is now winding up the bulk of its pandemic-specific workforce: there are close to 500 people in Victorian hospitals with the virus, and new cases are hovering at more than 7000 a day, a number that is likely to be grossly under-reported.

New strains or waning vaccine efficacy could lead to those numbers increasing further, putting yet more pressure on the already overburdened system.

Victorian Health Minister Martin Foley has warned that the current burden on hospitals is untenable without a higher rate of federal support. The state government did pledge $12 billion in the recent Victorian budget, which included training or hiring up to 7000 new healthcare workers, mostly nurses, but with global and national competition for such workers intense, it is unclear where Victoria might find them all.

The problem here is not just resources and post-COVID staffing, but how we organise and pay for healthcare in Australia. Under the current system, the states predominantly fund hospitals and the federal government pays, among other things, GPs. Both need more money and better workflows. It’s a system destined to cause friction and confusion. There is deliberate and accidental cost-shifting and each side wishes the other would shoulder more of the load.

“No one can say that the health system in this country is working well alongside the federal and state areas of responsibility. In fact, they work against each other,” NSW Premier Dominic Perrottet said.

The newly installed federal health minister, Mark Butler, is facing a strong push from Victorian Premier Daniel Andrews and Perrottet in the old national cabinet (rebranded the Council for the Australian Federation) for a system refresh. We agree this is required, and urge the ministers and first ministers to be bold. Instead of arguing only about who pays for what, we believe they should look with fresh eyes and initiate a sensible public conversation about system-wide reform.

The Age's View – Since The Age was first published in 1854, the editorial team has believed it important to express a considered view on the issues of the day for readers, always putting the public interest first.