SafeWork NSW inspectors have fined 23 restaurants, hotels and clubs during a blitz on COVID-19 breaches, including a Korean BBQ restaurant in Sydney's Inner West.

Butchers Buffet in Strathfield copped a $5000 fine after inspectors visited last Friday and found patrons sharing food, cutlery and crockery at a buffet. 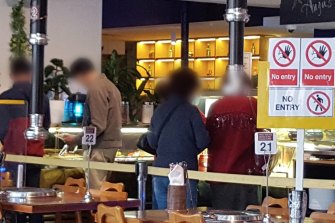 The restaurant did not have a safety marshal and there were no advertised limits on the number of patrons allowed inside at a time, SafeWork said.

Tables and chairs were not spaced sufficiently apart and CCTV footage showed a lack of physically distancing when diners helped themselves at the buffet. 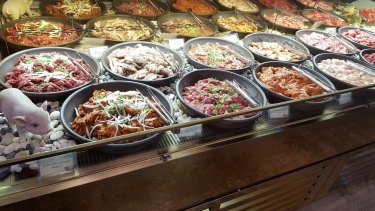 A sample of the delicacies at the buffet. Credit:SafeWork NSW

"Sharing items on a buffet is clearly a direct line for COVID transmission.

The Royal Hotel in Darlington was another to receive a $5000 fine, after footage showed insufficient spacing left between slot machines.

The NSW Liquor and Gaming department has previously warned venues could be temporarily shut down for breaching strict regulations.

A total of 23 venues were fined in the past week including the Albion Hotel and Crown Hotel in Parramatta, Ashfield Bowling Club, Zushi Barangaroo, Lotus Barangaroo, and Mohr Fish in St Ives.

All but two of the venues fined were in Sydney. The other two were the Thredbo Alpine Hotel and the La Famiglia restaurant in Jindabyne in the NSW Snowy Mountains region.

Authorities have so far issued NSW hospitality businesses 150 fines worth $658,000.

Everton and Liverpool in the top 2 at the end of the round in the Premier League for the first time in 27 years
Arteta about 0:1 with Leicester: I Don't know why the hell our goal was canceled. It is difficult to create space when 10 people are sitting behind the ball line
Rodgers on 1-0 with Arsenal: Leicester deserved to win. Vardy is a world-class player
Juve without Ronaldo could not beat Verona and Crotone in Serie A
Vardy has scored 11 goals in 12 games against Arsenal in the Premier League. Only Rooney has more
15,000 Teddy bears were planted at the Heerenveen match as part of a campaign to fight cancer. Toys sold for 230 thousand euros
Adidas and Pharrell Williams have reinvented the old forms of Real Madrid, Arsenal, Manchester United, Bayern Munich and Juve. The design is hand-made and celebrates imperfection
Source https://www.theage.com.au/national/nsw/self-serve-buffets-and-pandemics-don-t-mix-restaurants-fined-for-breaches-20200920-p55xbq.html?ref=rss&utm_medium=rss&utm_source=rss_national