Let me say at the outset I am not opposed to the government implementing policies and rules over constraining our activity to “drive the numbers down”. My main complaint has been that the gradual and staged implementation of poorly executed restrictions has created more economic harm than would have been caused by a rapid and shorter total shutdown. 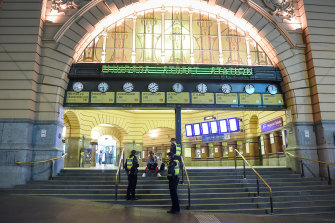 As we go from stage three to stage four in another effort to reduce the numbers, the economic cost for Victoria is going to be much greater but, importantly, this is also true for the country.

As of early July the expected reduction in the economy of Victoria alone was expected to be around five per cent and unemployment was set to rise to around nine per cent on official figures (noting that unofficial or actual unemployment is likely to be higher). These figures are of a similar magnitude for the overall Australian economy. These impacts, from mostly moderate restrictions by international comparisons, have not resulted in any real gains in control over the virus and have merely grown the economic cost.

Victoria is approximately 25 per cent of Australia’s economy but has a much larger impact nationally due to its interstate trade. Close to 40 per cent of all container traffic is handled by Victoria as part of a national supply chain. Victoria is also the largest source of food production in areas such as dairy and processed foods as well as manufacturing.

The reasons for the gradual ramping up and down of restrictions, prolonging the pain, is from the failed quarantine and the government's insistence that one should self-isolate if ill or have had a test, or you should stay at home if you can work at home. The gradual introduction of restrictions over an extended period of time has been a result of assumptions that most people will do the right thing, and it has been the most significant reason for failure to reduce COVID-19 cases.

Our easygoing culture is one that is cynical of politicians. We ignore them unless there is a disaster or an election. This means that when they implement rules that rely on self regulation, or on doing the right thing of our own volition, they never work.

This is especially the case with something like a pandemic where compliance needs are high and the tragic cost of such non-compliance is evident, such as in our aged care homes. Road safety laws failed for decades until we implemented stricter enforcement using random breath testing, police speed cameras and other measures. Deaths on the road then fell from well over a thousand to around three hundred a year.

The evidence of our failure is demonstrated by the 800 people who were meant to be isolated at home when they were doorknocked but were unable to be found, which was around 20 per cent of visited cases on average. This has gone on for many months at a huge cost and has been exacerbated by a failure to ramp up contact tracing very early to the extent that it is now almost impossible to carry out successfully. Many cases are now from an unknown source.

The poor acceptance that community transmission is everybody's responsibility is demonstrated by the fact that despite restricting movement to what were supposed to be essential activities only, many chose to define "essential" according to their own needs. The crowds in shopping centres and some hardware chains suggested that on a personal level, “essential” is anything we decide it is. This is human nature.

Stage four restrictions will come at a significantly increased cost to the economy than we have incurred so far, particularly as some small businesses will disappear forever. It will take time for them to be replaced and new jobs to be created, slowing our recovery back to pre-COVID levels.

The new restrictions will suffer implementation issues with a rigorous permit system that I believe will be exploited based on definitions. I can already foresee that businesses will obtain permits to try and operate as before.

Stage four restrictions in Victoria will have a larger impact on the national economy than cross border friction in movement of trade (impacted by controls) and the cessation of activity in some industries which are connected to others interstate.

There are other impacts on government finances and our economy that will be a cost burden for generations to come due to the debt incurred trying to support us over the prolonged period of staged restrictions. Let’s hope they can be removed soon.

John Vaz is a senior lecturer at the Monash Business School.

It's time to learn the names of new Borussia heroes. Now there are 17-year-old boys making goals
Paulo Fonseca: it's Important to bring Smalling back to Roma. We have only 3 Central defenders
Arteta about 2:1 with West ham: Arsenal made life difficult for themselves with losses, but they fought and believed in victory
Palace midfielder Townsend: Could have beaten Manchester United with a bigger difference. We had moments
Philippe Coutinho: I am motivated and I want to work hard to make everything work out well on the pitch
Torres on Chelsea: I Thought I could remain a top player, but I was unstable. Although there were enough successes
Neville on the broken penalty against Manchester United: an Absolute disgrace
Source https://www.smh.com.au/national/victoria/shorter-sharper-shutdown-would-have-worked-better-20200805-p55iug.html?ref=rss&utm_medium=rss&utm_source=rss_national