No matter who sits at the top of the NRL standings, the Melbourne Storm and Sydney Roosters showed the premiership will still run through their two sides after an instant classic on Thursday night.

Time, pressure and error eventually saw Storm skipper Cameron Smith kick the golden-point penalty goal to give his side the win 27-25, but it's clear both of these sides are at the top for the title chase.

"That's as good as it gets for a regular-season game," Smith told Fox Sports post game.

"That's what happens when two quality footy sides come together.

"Since the restart these guys have been by far the best in the competition and we wanted to measure ourselves tonight. 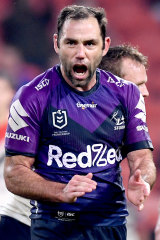 "We've been a bit clunky, had some good games and some average games but this win will give our younger players a lot of confidence."

The Roosters looked to have won the game with 10 minutes to go due to their relentless defensive display but errors had marred their attacks in the second half and it hurt them late as Storm playmaker Jahrome Hughes scored his second try with nine minutes to play.

Then a short-kick off from the Storm saw yet another error from the Roosters and it was Hughes who fired a pass to centre Paul Momirovski, who scored to tie the game.

Smith, who had spent much of the night in the halves, stepped up to kick for the lead with his sideline conversion bouncing off the post and in for a 24-22 lead.

With just minutes left the Roosters threw caution to the wind and they managed to force a penalty on the Storm, and Roosters half-back Kyle Flanagan converted the penalty kick to tie the game.

The Roosters perfectly manufactured a drop-goal attempt for playmaker Luke Keary and he took his chance to take the lead with less than a minute to play. 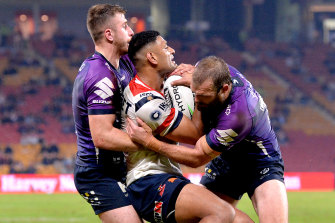 Daniel Tupou of the Roosters comes under some heavy pressure from the Storm.Credit:Getty Images

It looked like the game was over but the Storm found one last chance which ended with the ever-confident Ryan Papenhuyzen, who kicked a drop-goal to tie scores at 25-25 and force golden-point extra time.

The Roosters' 19 errors, most of them after half-time, finally led to their demise as Jake Friend was penalised for holding a tackle too long just metres from the try line and Smith kicked the winner from in front.

Storm coach Craig Bellamy opted to move Smith into the halves for just the third time in his career, with Brandon Smith starting at hooker and Ryley Jacks on the bench.

But it was moving Smith back to hooker that coincided with the Storm's comeback after a stunning display from the Roosters defence plus the tireless attacking play of 33-year-old twins Josh and Brett Morris had the Roosters up 22-12 entering the last 10 minutes.

Lopetegi about éver Banega: When he plays well, the whole of Seville plays well
Sanchez received 7.5 million pounds from Manchester United for terminating his contract
Javi Martinez is Interesting to Renn. The club will play in the Champions League
Fonseca Pro 0:2 with Sevilla: Roma deserved to lose
Manchester United are ready to sell Lingard. He has scored in the last two matches
Dzeko Pro 0:2 with Sevilla: Roma never got into the game
Sergio Region: Sevilla are determined to win the Europa League. We want to win everything we can
Source https://www.theage.com.au/sport/nrl/smith-boots-winner-as-storm-win-classic-over-roosters-20200702-p558k2.html?ref=rss&utm_medium=rss&utm_source=rss_feed

Wheels in motion once more at Carriageworks

‘She told her son I was dead’

Holding the ball. How did we get here?