An unconfirmed number of staff members at Villawood Detention Centre have been stood down to self-isolate after recently attending a function at the Crossroads Hotel.

The Australian Border Force confirmed that staff employed at Villawood had recently been to the Crossroads Hotel, and are following advice from NSW Health and all are currently self-quarantining. 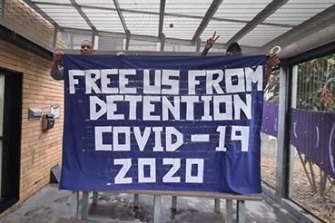 Ian Rintoul, from the Refugee Action Coalition, claimed up to 30 Serco guards were self-isolating after the exposure.

Serco has not confirmed how many of its staff are self-isolating after they were identified by NSW Health contact tracers.

"Seven years ago they risked their lives to get to safety. Instead of safety, the government is still playing with their lives."

Mr Rintoul said there had been no announcement at the Villawood Detention Centre and no arrangement for detainees to get tested despite being potentially exposed - and guards are not allowed to bring in face masks or hand sanitiser.

Border Force also confirmed that 12 people have tested negative to the virus after visiting the Crossroads Hotel before travelling to the RAAF base in Wagga Wagga.

They will remain in self-isolation until the end of next week.

Earlier today, Home Affairs confirmed that a staff member at Melbourne's Mantra Hotel, which is housing around 60 asylum seekers, has tested positive to COVID-19.

Frankie de Jong: Barca have a lot of problems, the match with Bayern showed that. A lot of things need to change
Philippe Coutinho: it was unusual to Play against Barca, but I have a contract with Bayern
Bartomeu does not intend to retire after 2:8 from Bayern
Bayern punished Barcelona for an 8-man defense. In this match, Messi was the problem, not the solution
L'equipe put Setien one for 2:8 with Bayern. For the first time, such an assessment was received by a coach
Pozornik! Barca fans met the team at the hotel after 2:8 from Bayern
Bayer's CEO confirmed that Havertz wants to leave the club
Source https://www.smh.com.au/national/nsw/staff-stood-down-at-villawood-detention-centre-due-to-covid-19-concerns-20200713-p55box.html?ref=rss&utm_medium=rss&utm_source=rss_feed