The eight Australian states and territories, plus New Zealand, are in a horse race. They have rounded into the home straight. NZ, Western Australia, South Australia, the ACT and the Northern Territory are leading the pack, with very low or zero COVID-19 cases reported in the past two weeks.

But what really matters is notified cases of COVID-19 that cannot be traced to an already known case – as these signify hidden community transmission. For the two weeks from May 8 to 21, there were zero such cases in the ACT , the NT, WA, Queensland, Tasmania and NZ. SA had two while Victoria had 10 (out of a total of 136 cases, mostly associated with known outbreaks) and NSW had six (out of 41 total cases). 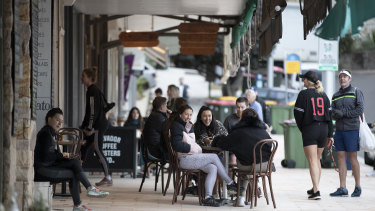 Loosening up slowly ... people gather at a cafe at Bronte Beach.Credit:Getty Images

The winner will be the state or territory that first reaches 28 days of no apparent community-acquired infection. Why? Because this comfortably includes two incubation cycles of COVID-19, and we would assume that if it was still circulating in the community a symptomatic case would have popped up somewhere during 28 days.

Nothing is guaranteed, but modelling has suggested a 95 per cent probability of "elimination achieved" if there are no community-acquired cases after a month. And depending on which way you look at the data, and its quality, the ACT, the NT, Tasmania, WA and NZ may have even crossed the finish line, having reached 28 days with no reported community-acquired cases.

Is the elimination race worth winning? Or is it worth getting across the line to declare elimination – even if you are not the first?

Yes – probably. The advantages of elimination are no direct COVID-19 illnesses and deaths, and that your citizens can return to near-normal life – not entirely normal, because there would still be high vigilance required for an incursion whereby a traveller to your state brought the virus in with them. Surveillance systems would still be high, and apps turned on. But, in principle, your intra-state economy and social life could "snap back".

And then, if two or more states achieved elimination, and they trusted each other’s surveillance and border controls, they could selectively open their borders to each other at little risk.

So what are the downsides? First, the effort of getting to elimination. But, as stated, many jurisdictions are close or may even have crossed the line. Second, you then presumably become isolated from the rest of the world that has not eliminated, restricting tourism and some trade. Third, you have put all your eggs in the vaccine exit strategy – if it fails to eventuate in a timely manner, you will be in for very long border control, or needing to switch to another strategy.

At this point in time, though, if elimination is in reach, one should reach out for it as most likely the best option.

And herein lies the conundrum. Throughout the whole pandemic, we have had the irony of many state premiers and chief medical officers talking elimination, and the Prime Minister and federal CMO talking suppression. That is, language such as “we need to learn to live with the virus”.

Suppression involves accepting low levels of virus circulation and finding the balance in loosening up our physical-distancing restrictions to the equilibrium point where caseloads are manageable. This balancing act is the intended destination for most of the world, where elimination is simply not thought feasible due to porous borders and internal pressures to open up the economy.

In Australia, caught right in the middle of this are NSW and Victoria – the two states with continuing community transmission. They are well back in the home straight in our horse race – and, frankly, looking likely to pull up before the finish line. Moreover, while partially resisting nudges from Canberra, NSW and Victoria are still slowly opening up.

Premier Gladys Berejiklian announced on Friday that pubs and restaurants will be able to seat up to 50 patrons from June 1, an “important, critical, big step”, but it would only be done with strict social-distancing measures in place.

If elimination of the virus from NSW is the goal, the strict social distancing will have to be very good – as opening up is otherwise inconsistent with eliminating the virus. That is, NSW and Victoria look likely to be heading into a suppression way of living – unless excellent contact-tracing can save the day, everyone starts wearing masks, or a partial lockdown is restored.

Let’s cast our minds forward a month. It seems plausible (but as with anything in COVID-19, nothing is certain) that we could end up in a situation where NSW and Victoria are living in suppression land with low-level community transmission, but where all other states and territories (and NZ) have met the 95 per cent probability of having eliminated the virus, and are about to form a travel bubble that excludes NSW and Victoria.

Whoops. The two biggest parts of the Australasian economy excluded. This scenario is going to be extraordinarily difficult to manage politically. Should COVID-free states and territories accept travellers from NSW and Victoria? Could the ACT even control its land-locked border with NSW to prevent incursion? Or will the ACT just have to accept occasional incursions and move to join NSW in suppression-land?

Another scenario, if most states and territories and NZ do achieve elimination and borders are protected, is that NSW and Victoria may be forced back into lockdown in a valiant re-attempt at elimination so as to join the rest of Australasia. Or, conversely, all states and territories and NZ could accept the low-circulating suppression world and agree to let travellers in from NSW and Victoria.

But states and territories could then end up back at the starting line if the virus is reintroduced and not immediately stamped out.

These are challenging issues, politically fraught, and certainly not what the citizens of NSW and Victoria want to hear. But let’s not forget, this conundrum that Australasia faces – along with possible future travel-bubble mate states in the Pacific and Asia – is a damn sight better than the likely second wave of the pandemic that most other countries may soon be experiencing.

Tony Blakely, an epidemiologist and public health medicine specialist, is a professor at the University of Melbourne.

Bent on Grealish: Jack should be worth 80 million pounds, given The amount of Maguire's transfer
Serie A will resume on June 20. The Italian Cup restart is scheduled for June 13 and 17
La Liga will play 32 days in a row (Yes!). Clubs are promised a minimum of 72 hours between matches, and players are already injured
The Premier League published the format of the match schedule
The doctor of the Locomotive: Farfan feels great
Real Madrid – the most expensive club in Europe, Manchester United-2nd, Barcelona-3rd (KPMG)
The Premier League announced the resumption of the season on June 17
Source https://www.theage.com.au/national/states-race-in-the-covid-19-elimination-stakes-20200522-p54vn8.html?ref=rss&utm_medium=rss&utm_source=rss_feed

Restrictions may ease sooner than thought

Deadline could cause chaos for property

Man With Chainsaw, Described as Looter by Eyewitness, Captured on Camera at Minneapolis Protests

The one person Latrell Mitchell must listen to

Why you won’t get faster internet

Your Daily Horoscope for Friday, May 29

Time for a new social contract

Start it up: industry unites with universities to innovate in pandemic

Target and superquiz, Friday, May 29

From the Archives, 1973: Dr Mead's tour of social housing

To fix our housing industry, governments need skin in the game

Has HR forgotten about employees?

Freezing the pay of vital workers smacks of hypocrisy

'From typesetter to tea lady': end of a Murdoch newspaper era in Sydney

'The Cat' refused to play and scratched Murdoch's plan A

‘Our health is in your hands’: Invention fights virus

Why the rich are busy buying new homes

Sacred sites: Where's our outrage over this destruction?

Thanks for the memories, council turns back on Morrison money to save Memorial Pool

Guildenstern is wearing a worried look...

Skills gap is the nation's chasm

No silver bullet, but we still need faster rail

This is the one thing I'm really waiting for

Australia's $4b aid program refocused to deal with COVID-19 recovery

WHO and United Nations ‘now lecturing’ over ‘screwed-up lockdown generation’

Attenborough to set out vision for future

‘THE BATTLE IS ON’: China warns it will no longer be ‘intimidated’

‘The battle is on’: China’s warning

‘We would like to see China back onside’: US Ambassador Culvahouse

Having a butcher's at sausage metrics

Cool it, Andrews urges feds as Victorians surge back to work

COVID rules eased in NSW: 20 people at weddings, 50 at funerals

Leaders must heed the bushfire experts and act

‘Flames for a Mile’: Building Burns as Riots Erupt in Minneapolis

Goulburn tips: Throwing the form out the window