The big supermarkets have hammered out a compromise with the Victorian government in an effort to keep the state's food supplies flowing during the strict stage four COVID-19 lockdown.

Coles and Woolworths have been given several more days to organise their distribution depots – which are vital to keeping supermarket shelves stocked – to adhere to new government restrictions. 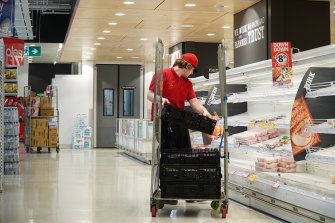 Restocking an empty fridge at a Coles supermarket.

The companies will still have to reduce their workforces drastically but will be able to meet those requirements by standing down employees who are not essential to the supply chain for food and other groceries.

The compromise, which was announced on Thursday afternoon, came after an intervention by the federal government amid fears that Victoria’s stringent restrictions might hit the national supply chain and disrupt the state’s food supply.

Premier Daniel Andrews warned shoppers on Thursday not to panic buy or hoard "enormous quantities of food", saying the government and retailers were committed to ensuring there was ample supply.

He said the rules on supply chain workforces were aimed at driving down the number of people working at the distribution centres, making it harder for the virus to spread, while keeping supply chains running.

“A lot of work has gone into driving down staff levels but at the same time protecting the amount of product that will be on supermarket shelves,” the Premier said.

Prime Minister Scott Morrison, speaking in Canberra on Thursday before the compromise was announced, said he had "very frankly and very fully" passed on advice to the Victorian government about industry supply chain concerns.

He said he was concerned on a "number of levels" around critical supplies, particularly with food, and the knock-on effects for supply chains in other parts of the country.

Small abattoirs with less than 25 workers on site also won an exemption on Thursday from an order to cut their workforces by 33 per cent. The rules affecting poultry processors were also softened, partly because of animal welfare concerns.

Supermarket distribution depots had emerged as a COVID-19 concern in the weeks before the fresh lockdown was announced, with a cluster of more than 20 cases at Woolworths' Mulgrave centre and another outbreak at the Coles centre in Laverton.

During negotiations those outbreaks were cited by the government as the primary reason why the sites should not be given exemptions.

But after Monday’s announcement of a widespread commercial lockdown for Victoria, industry sources warned of serious consequences for the state's food supply if a compromise could not be reached.

Woolworths welcomed the modified restrictions on Thursday and said it would be changing the working conditions for 1300 Victorian staff to stop them from travelling into their workplaces. This will comply with the 33 per cent workforce reduction rule while allowing the supermarket to operate at the required capacity.

Non-urgent repairs and stocktakes will cease, managers and support staff will switch to remote working and workers aged over 70 or with underlying health problems will be sent home.

The Australian Food and Grocery Council said rules cutting workforces at the distribution centres of food manufacturing companies could slow down supply chains, lead to manufacturing cutbacks and, potentially, to shortages of some foods at times.

“If this does affect the productivity of the distribution centres, in other words how fast they can move product through them, whether it be owned by the retailers or owned by the manufacturers, it effectively slows down the whole supply chain,” said the group’s acting chief executive Dr Geoffrey Annison.

The main union for the supply chain workers, the United Workers Union, said it was sceptical that the workforce reduction would achieve much against the virus.

“Distribution centres and warehouses can be made more safe by implementing other arrangements including by making sure they’re closed for at least three days if cases start to be detected and they’re deep cleaned and then everyone is tested,” union official Matt Toner said.

The Australian Meat Industry Council said it was difficult to forecast the impact stage four restrictions would have on red meat supply and prices but the more than 800 independent retail butchers across Victoria had a "crucial" role to play in keeping consumers supplied.

Large poultry processors have now been told they must reduce staff by 20 per cent, rather than the one-third reduction imposed on large abattoirs. The government said the concession was granted because poultry production systems were time sensitive, poultry processing was highly automated and fewer workers were required relative to abattoirs.

Victoria’s four major poultry facilities process 150,000 to 200,000 chickens a day and many of those birds would have had to be destroyed and their carcasses discarded if the sector was subject to the same staffing cuts as red meat producers, the government estimated.

A spokesperson for Coles said the company would prioritise its store and distribution centre teams in line with the new restrictions to keep supplies on its shelves.

“We thank the Victorian government for clarifying the measures that will apply to supermarket supply chains under stage four restrictions announced this week and providing additional time to prepare for their introduction so that we can continue supplying essential food and groceries across Victoria."

Noel Towell is State Political Editor for The Age

Dominic Powell writes about the retail industry for the Sydney Morning Herald and The Age.

Darren is the mining and agribusiness reporter for The Age and The Sydney Morning Herald.

West ham offered 23+10 million pounds for defender fofan. Saint-Etienne refused
Andy Cole on £ 109m for Sancho: it's crazy money. Manchester United will not spend them at random
Juventus loaned Luca Pellegrini to Genoa
Palace, Brighton and Sheffield want to buy Brewster. Liverpool ask for 25 million pounds
Milan have offered 4 million euros for the striker Bodo-Glimt Gauge. He scored them in the Europa League
Atletico showed a photo of Suarez in three sets of uniforms
Lemar is Interesting to Leipzig
Source https://www.smh.com.au/national/victoria/supermarkets-reach-lockdown-deal-with-state-to-keep-victoria-fed-20200806-p55jaq.html?ref=rss&utm_medium=rss&utm_source=rss_feed