Young people are now coping better with the COVID-19 pandemic than they were in April, but many still feel like they are "swimming with sandbags" as they juggle disruptions to schooling and increased family responsibilities. 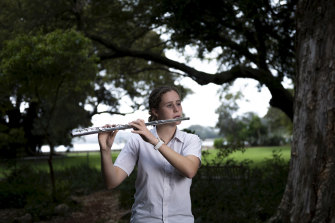 Emily Thornton, 18, is a year 12 student at the Conservatorium High School.Credit:Rhett Wyman

Unicef program and advocacy manager Juliet Attenborough said young people were resilient, with many reporting they had learned coping skills during the pandemic, while the lifting of lockdown across most of the country had also helped.

"They are looking slightly more able to cope compared to April and that is better than they expected but it is still worse than how they thought they'd been going before the pandemic," Ms Attenborough said. "It’s more positive but they’re still definitely under strain."

Young people feel one of the biggest effects of the pandemic has been on their education, with senior students believing they are behind where they should be and feeling penalised compared with other students who are less affected or those who graduated in different years.

One girl in Melbourne said: "It’s like when you are in a swimming race and … you are swimming with the corona-free person who has had the greatest year 12 experience, but I am with all these bags of sand on my back trying to swim the same race."

More than half of students believe they are behind compared with before the pandemic and while most are receiving support from their schools, 13 per cent say they are not.

Ms Attenborough said there had been focus on the young people who have not returned to formal schooling, but students reported concern for their classmates who have returned but were visibly disengaged and struggling; they "sit at the back of the class and you can tell things aren’t right".

More than half of young people said they had more responsibility at home than before the pandemic, with many reporting that this was a positive thing that made them feel they were contributing. However, one in four said their parents or carers had lost income and one in 20 said they had become the main breadwinner.

Emily Thornton, 18, from Bayview on the northern beaches, said she had a lot more "certainty" about her final exams than she did in April. She was still "nervous" but the pressure had lessened because she had received an unconditional office to study music and security studies at the Australian National University based on her year 11 results.

Ms Thornton said it was "upsetting and damaging" that she cannot play flute in any orchestras or bands in her final year of school at the Conservatorium High School in the city, because of the ban on woodwind instruments in ensembles. Her main non-musical extracurricular activity of competitive surf life saving also had its season cancelled.

Ghani Mohammad, 17, from the Liverpool area, said he was finding it much easier now he was back at school in person because he could ask his teachers for help. He is hoping to study engineering next year.

The survey had 1289 respondents from a nationally statistically representative sample, including 403 from Melbourne to allow further analysis.

Sandro Tonali: Milan on the crest of a wave. The Rossoneri shirt is pressing, but I'm getting in shape
Kadyrov's adviser hit the judge in the groin, and his son was dismissed from Akhmat and banned for three years. At first they all denied
AEK Carrera lost both matches in the Europa League with a total score of 1:5
Stefano Pioli: Milan have not achieved anything yet. The season is long, we will face difficulties
Mourinho 0:1 with Antwerp: the Best team won and the worst team lost
Bale did not make a performance in his first three games for Tottenham. He hasn't scored since January
Father Courtois: Keylor Navas was not a good teammate. When he left for PSG, everything became easier
Source https://www.theage.com.au/lifestyle/health-and-wellness/swimming-with-sandbags-young-people-faring-better-through-the-pandemic-but-still-struggling-20200919-p55x7l.html?ref=rss&utm_medium=rss&utm_source=rss_feed

Ask a Reporter: Did the LNP just admit that New Bradfield Scheme won't be built for years?

Writer Kate Cole-Adams learnt about herself and others in lockdown

Where to vote on election day: Full list of Coast booths