A young Sydney man infectious with COVID-19 visited seven different restaurants, pubs and a Woolworths within 48 hours, potentially spawning a new coronavirus cluster in the CBD and inner-west.

Contact tracers have been unable to identify the source of the 20-something man's infection, prompting Premier Gladys Berejiklian to urge young people to limit their socialising while NSW’s COVID-19 defence rested "on a knife’s edge". 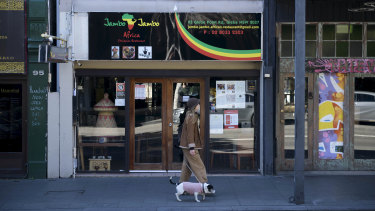 Man in his 20s dined at Jambo Jambo while infectious with coronavirus.Credit:Rhett Wyman

Victoria on Thursday recorded 471 new coronavirus cases and eight deaths, with their Deputy Chief Health Officer saying he expected case numbers would start to decline within the next 10 days.

Health officials also added 107 mystery coronavirus cases to Victoria's tally of community transmission, in addition to the 760 cases that were the catalyst for the Andrews government's disaster declaration and introducing stage four lockdown restrictions.

NSW Health reported 13 new cases on Thursday as Ms Berejiklian said young people in particular should limit the number of places they visited. People in their 20s account for the largest proportion of COVID transmissions in NSW and nationally.

“If you have the virus and you go out five times a week to different places you could potentially be spreading it to five different locations, and then we have to contract trace everybody,” Ms Berejiklian told radio station Triple M. 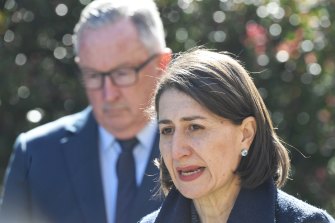 "It's not anybody's fault but it's just the nature of the virus. It's so contagious that if you don't know you have it and you are still socialising you have the potential to give it to so many people.

"We're not saying don't socialise or don't go out at all but we are saying please limit your behaviours just in the next few weeks," she said, urging the public to keep up social distancing.

Of most concern to NSW health authorities is the man's visit to Jambo Jambo Restaurant in Glebe on July 31 between 7pm and 8.30pm. Anyone who was at the Ethiopian restaurant during this time is considered a close contact and has been told to immediately self-isolate until August 15 and get tested even if they have no symptoms.

They should also watch for COVID-19 symptoms and get re-tested should any symptoms recur, NSW Health said.

The man also visited six other inner-city venues while infectious, including the Eveleigh Hotel in Redfern on July 31 from 8.30pm to 10pm.

He was also at Woolworths Marrickville Metro on August 2 from 7pm to 7.20pm.

Anyone who visited these venues during these periods are considered casual contacts and should watch for even the mildest COVID-19 symptoms and if they occur, get tested and self-isolate.

Jambo Jambo posted a statement on its Facebook page saying they were working with NSW Health to contact everyone affected and the premises was being thoroughly cleaned. The restaurant will be closed until August 14.

Another new case, a man in his 20s from the city's south-west who was a close contact of a person in the Mounties club cluster, visited three Sydney venues while infectious.

On August 1 the man visited Penrith Plaza between 10.30 and noon, Master Hot Pot in Canley Vale between 1pm and 2pm and BBQ City Buffet in Bankstown between 7pm and 8.30pm.

Anyone at these venues during these times are considered contacts and are urged to watch for symptoms, get tested and self-isolate immediately if any occur.

NSW Health’s latest surveillance report showed 16 cases had no known link to other cases or clusters in the past four weeks, confirming COVID-19 was circulating undetected in the community "risking further outbreaks".

One of these mystery cases was symptomatic for six days before getting tested and isolating, the report revealed, confirming NSW not only faced the threat of the virus seeding across its border with Victoria, but stealthy transmission from within its own communities.

"We are about halfway through what is a really critical period," Ms Berejiklian said.

"When we realised how bad Victoria’s situation was we knew we had four to six weeks of a real nail-biting situation."

In Newcastle, a student at St Pius X High School tested positive for COVID-19 after attending class, caught a bus and played in a soccer match in Sydney's inner west while unknowingly infectious.

All members of the under-15s Newcastle Jets and Stanmore Hawks who played at Arlington Oval in Dulwich Hill on August 1 are considered close contacts and must self-isolate for 14 days since exposure.

The boy's school is closed for cleaning and contact tracing is underway.

A close contact of the teenager has already tested positive for COVID-19. The man attended several Newcastle venues while potentially infectious, which are listed on the NSW Health website.

The other 10 new cases reported on Thursday are linked to known clusters.

A total of 104 people are being treated for COVID-19 by NSW Health, including 10 in intensive care units, four of whom are on ventilators.

Koeman Pro 3:0 with Celta: Proud of the team. The results show that we are on the right track
Milan extended their unbeaten streak to 18 games by beating Rio Ave on penalties in the Europa League qualifier
Arteta on Manchester City in the League Cup: Arsenal are not very lucky with the draw. This is another test
Klopp about losing to Arsenal and Liverpool in the country of dreams, you have to score. Last pass failed
Muller held the UEFA ceremony in the stable. There had Neuer, Kimmich and Evangeliski
Liverpool 4 seasons in a row, cannot get past the 5th round of the League Cup and 2012 wins the tournament
Leno - first Arsenal goalkeeper in 8 years not to miss at Anfield
Source https://www.theage.com.au/national/nsw/sydney-s-new-cluster-fears-after-covid-19-case-has-big-weekend-20200806-p55jan.html?ref=rss&utm_medium=rss&utm_source=rss_feed