Born and raised in Connecticut, Susan Crosse was 21 when she left the United States. She married a Brit, and in 1986 they settled in Australia, ultimately in Sydney. "We just thought this was kind of neutral ground," she says. "And here I shall reside forevermore."

It was only this year that Ms Crosse, now 55, decided to finally renounce her American citizenship. She's not alone. In the first half of 2020, a record number - 5313 - of (now former) Americans decided to shred their US passports and extricate themselves from the Land of the Free.

That already smashes the 2072 people who renounced last year and almost eclipses the 5409 who ended their citizenship in 2016, which was, at that time, a record. Depending on who you talk to, there are two reasons for the boom: tax, and Trump. 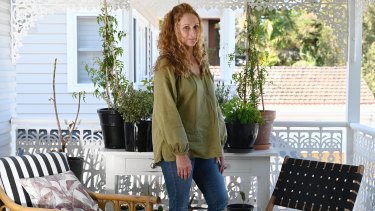 Susan Crosse, who lives in Newport on the northern beaches, is in the process of renouncing her American citizenship.Credit:Nick Moir

The tax incentive has been a factor for a long time. The US is one of just two countries that taxes its citizens regardless of where they live. The other is Eritrea in eastern Africa.

Like most renouncers, Ms Crosse grew tired of the time and expense of filing an annual tax return in the US, despite having no income or assets there. It is a familiar complaint among the estimated 9 million Americans abroad, who are obliged by law to file a tax return even if most of them don't end up owing any tax.

"I'm not living there, I'm not using anything the US government can offer me," Ms Crosse says. "What they're doing is stealing my retirement here in Australia."

In 2016, then British foreign secretary Boris Johnson renounced his US citizenship after complaining two years earlier of an "absolutely outrageous" attempt by US tax authorities to charge him capital gains on the sale of a London home. The Financial Times later reported that he paid an undisclosed sum.

Most Americans in Australia can probably offset their tax liability and don't need to actually send any money back to the US. But they still need to file a return, which means consulting an accountant familiar with the tax law of both countries. That can be difficult and costly.

The Sun-Herald spoke to several Australians who have renounced their US citizenship, or plan to, but did not want their names published due to fears of retribution. Technically, the US can block people re-entering the country if they renounced their citizenship to avoid US taxes - although it is enforced extremely rarely.

Karen Alpert, a former American and a finance lecturer at the University of Queensland Business School, says Americans "live in fear" of the Internal Revenue Service, even if it is unjustified.

"Everybody's afraid of them," she says. "In reality the IRS is so overwhelmed trying to enforce US tax law inside the US - coming to Australia to enforce it isn't within their budget."

There is evidence that more Americans are choosing to renounce for political reasons, too. In August, Alistair Bambridge, a partner at Bambridge Accountants, told CNN that this year's renouncers were mainly people who "already left the US and just decided they'd had enough of everything".

"What we've seen is people are over everything happening with President Donald Trump, how the coronavirus pandemic is being handled, and the political policies in the US at the moment," he said.

Misgivings about the President also played a role in Ms Crosse's decision to start the renunciation process.

"I'd probably have a much harder time [renouncing] if I had faith in the man who is heading the country at the moment," she says. "In my personal opinion he's ripping the country apart and not qualified for the job. I feel little pride in saying I'm an American when it comes to the President."

Renunciating isn't easy, especially during a pandemic. Appointments at the US consulates have to be made in person, and there are only three in Australia: Sydney, Melbourne and Perth. It also costs $US2350 ($3220).

Ms Crosse says she just doesn't feel connected to the US anymore. Her five adult children are "accidental Americans" on account of her citizenship, and they are also considering renouncing. But it is still a difficult decision for anyone to make.

"I started filling out the form and I started crying," Ms Crosse says. "It's very sad to sever those home ties."

Sandro Tonali: Milan on the crest of a wave. The Rossoneri shirt is pressing, but I'm getting in shape
Kadyrov's adviser hit the judge in the groin, and his son was dismissed from Akhmat and banned for three years. At first they all denied
AEK Carrera lost both matches in the Europa League with a total score of 1:5
Stefano Pioli: Milan have not achieved anything yet. The season is long, we will face difficulties
Mourinho 0:1 with Antwerp: the Best team won and the worst team lost
Bale did not make a performance in his first three games for Tottenham. He hasn't scored since January
Father Courtois: Keylor Navas was not a good teammate. When he left for PSG, everything became easier
Source https://www.theage.com.au/national/tax-and-the-trump-effect-why-so-many-americans-are-renouncing-citizenship-20200911-p55ups.html?ref=rss&utm_medium=rss&utm_source=rss_national