A 15-year-old Werribee girl has died after the car she travelling in veered off a road in Hoppers Crossing on Saturday night. 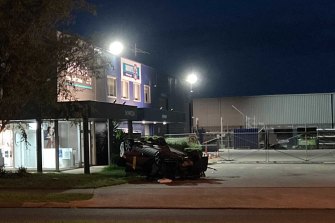 The scene of the fatal crash at Hoppers Crossing.Credit:Nine News

One of the car’s occupants initially fled the scene but was arrested by police a short time later. Two others were also arrested following the crash.

The 15-year-old girl was taken to hospital where she later died.

Detectives from Major Collision Investigation Unit are currently interviewing a 15-year-old girl, a 17-year-old boy and a 16-year-old boy, one of whom is believed to have been the driver.

Anyone with dashcam footage or any other information can contact Crime Stoppers on 1800 333 000 or submit a confidential report at www.crimestoppersvic.com.au.

I'm not here to lose. Four dismissals of Jose - in pictures
Neville on Klopp's words: He can't say what he wants. The owners threw him under the bus, he hates every detail of the Super League more than me
Perez on Super League: It wasn't hard to convince Laporte. This is for the future of Barcelona
Perez on Super League: If we agree with UEFA, we will start in August. We can't wait a year
Cassano on the Super League: We need to kick Juventus, Milan and Inter out of Serie A. Let them play in their own league, let's see
Primitive gradients, letters with a stroke and a stop sign-this is how the design of the Super League looks
Perez on Ceferin's words about Agnelli: This is unacceptable. We do not want to see a president who insults others

South Australian police commissioner has ‘ultimate control’ of the state

The quiet making of a future queen

He’s mine: Chris Waller jumps first to select Nature Strip for The Everest

‘Not sure what I’ve signed’: Sidoti’s first day in ICAC stand

‘Scary as’: Rape claims only bad for de Belin and his ‘misso’, court hears

Sydney’s historical home of athletics in for much-needed revamp

No recession for those in the market for a luxury car

Russia block of Black Sea would be ‘escalation’: Washington

‘Stop bossing others’: Xi Jinping’s not-so veiled rebuke to the US

PM ‘should hang his head in shame’ over ‘cheap’ identity politics

How NASA’s Mars flight could transform drones on Earth

TERRIFYING INFECTION RATE: How fast COVID-19 can spread on a plane

Farewell Afterpay, Australia loses its homegrown tech giant to the US

LNP attempts to launch an inquiry into Queensland’s corruption watchdog

Where overseas buyers trying to buy in Australia

Deal with junta may be needed to avoid ‘Syrian-style bloodbath’, says Evans

‘America will go up in flames’: Minneapolis on edge as jury deliberates

Caught up in ‘tit for tat’ political games: journalist Mike Smith details his exit from China

Ingenuity flight is ‘beginning of a golden age of space exploration’

PM remains a ‘prisoner’ of the anti-climate change section of the Coalition: Middleton

‘We were ready to go’: When the VFL faced its own rebel league challenge

The best scented candles to gift on Mother’s Day

The UN must conduct an ‘international independent investigation’ into Uighur abuse

Pack animals: Tyrannosaurs not so solitary after all

Stepping back in the ring: bookies’ return a huge boost for Warrnambool

Why don’t we see more pregnant performers? This soprano hopes we will

The year of nothing and everything